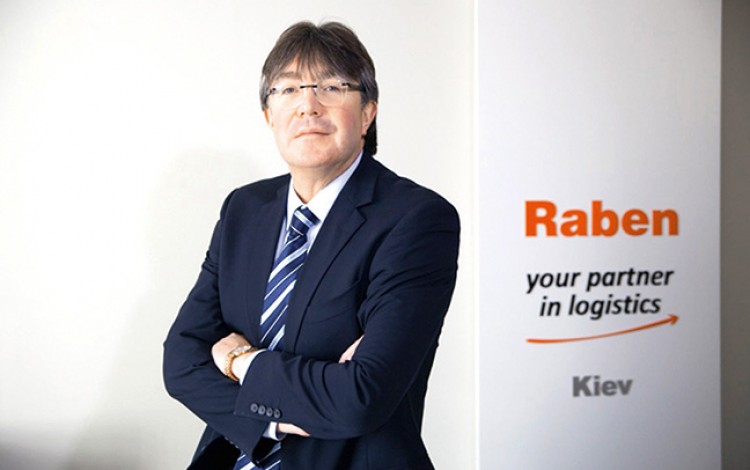 Netherlands-based international logistics company Raben is celebrating 15 years in Ukraine this year. Raben Ukraine offers a full scope of logistics activities in Ukraine including domestic and international forwarding, contract logistics and customs clearance as well as sea and air services. The company employs 500 people throughout Ukraine and maintains six depots in regional capitals (Kyiv, Dnipro, Kharkiv, Lviv, Odesa and Khmelnitskiy) along with around seventy thousand square meters of warehouse area across the country. Raben Ukraine Managing Director Boris Khruslov spoke to Business Ukraine magazine about the company’s 15 years in Ukraine and explained why he believes the country’s ambitious current roads upgrade could help transform both the logistics sector itself and the wider Ukrainian economy.

Raben Group is celebrating 15 years in Ukraine this year. What do you regard as the most striking changes to take place in the Ukrainian logistics industry since you entered the market in 2003?

The ten-year period after we first entered Ukrainian market saw very impressive economic growth. Relatively high incomes allowed most of the Ukrainian business sector to develop some kind of in-house logistics capacity during this period, but many companies seemed to treat this as a “flashy toy” rather than a crucial part of the business process. Third party logistics (3PL) services were popular among foreign businesses but many local companies continued to ignore the potential of these services due to various post-Soviet prejudices. It took considerable time and effort to change this archaic approach to logistics. The subsequent economic recession that struck the country after the revolutionary events of 2013-14 finally transformed attitudes towards logistics away from the “cargo cult” of the 2000s to the real thing.

How has your client base evolved in Ukraine over the past 15 years?

The scope of our logistics product portfolio enables us to provide services to a wide variety of industries. Nevertheless, FMCG, retail and so-called white goods (household appliances) requiring complex, cross-functional service make up our core customer base. We currently maintain partnerships with over 1000 customers. Our top ten customers are all world-known brand names. Needless to say, it took years to build up this level of trust and mutual confidence.

At the same time, it is also worth noting that the growth of our client base has become much more moderate in recent years. The reasons for this slowdown are obvious – the combined impact of the war in the east of the country and the slow pace of post-Maidan reforms makes Ukraine appear as a less-than-deal destination for international investment.

Ukrainian exporter companies are increasingly looking beyond the CIS and towards EU and global markets. What impact has this had on the Ukrainian logistics sector?

The biggest CIS market for Ukraine used to be Russia, which accounted for almost 37% of Ukraine’s imports in 2013. The trade wars following the political conflict between the two countries have ruined this trend and forced Ukrainian manufacturers to look for alternatives in the West. We need to be realistic and recognize that it will take years to redirect the country’s trade flows entirely towards EU markets. However, we are already seeing some success stories in this direction. The best example is probably Ukrainian confectionary producer Roshen. Another example is Alupol, an aluminum product exported to Poland.

Ukraine is currently investing in an unprecedented upgrade of the country’s road network. What kind of impact will this have on the country’s logistics industry, and what could it mean for the wider Ukrainian economy?

If the Ukrainian road network genuinely undergoes renovations in line with the public statements of Infrastructure Minister Volodymyr Omelyan, it will have a remarkable influence on the logistics sector and on the Ukrainian economy in general. Firstly, the decentralization of national roads authority Ukravtodor will greatly simplify funding allocation procedures for infrastructure improvements. This means that from now on, local authorities will be responsible for road repairs in their respective regions. This will introduce a welcome degree of clarity and will make it clear where to direct future complaints about bad roads.

According to the existing schedule, the main roads leading to and from Ukraine’s European Union neighbors will undergo major repair works this year. This has the potential to improve the investment climate in Ukraine dramatically by making the country much more attractive in terms of transit routes. An improved road network will also attract investments to Ukraine’s major regional centers. It will enable logistics companies to build more and more facilities along routes between regional centers. Companies will be able to enlarge the number of routes they offer domestically and increase their goods turnover. The result will be an overall increase in Ukraine’s GDP.

How do you expect Raben Group’s activities in Ukraine to develop over the coming five-year period?

We will continue working in Ukraine regardless of any setbacks. I want to believe the Ukrainian economy will stabilize soon. This will enable us to invest more actively into new projects. I expect that in five years’ time, the logistics industry in Ukraine will have to adapt to the changing trade realities created by innovations such as the rapidly growing e-commerce sector. With this in mind, I can see a big future for the service sector known as Fulfillment (complex logistics solutions for internet stores).

The geography of business concentration is also going to change. The gradual exodus of big business from urban areas will increase due to over-density, pollution and tough competition. This will lead to changing logistics requirements such as expanded road networks, along with the need for investments in cross-docking operations, warehouses and new technologies. Much work lies ahead, but we are happy to accept the challenge.