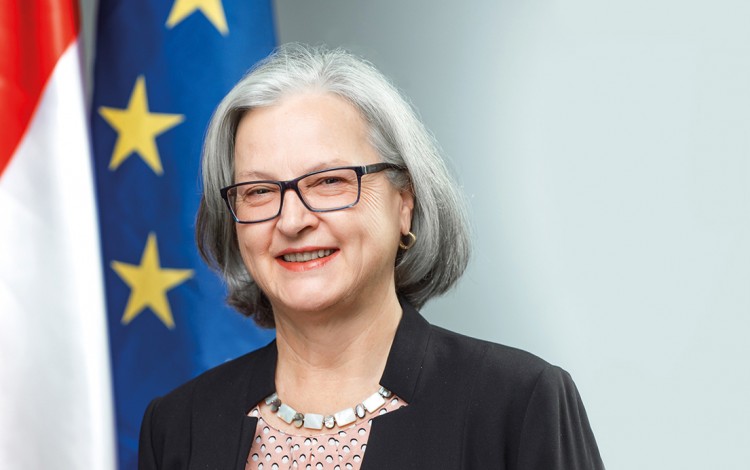 Since taking up her post in Kyiv in 2015, Austrian Ambassador to Ukraine Hermine Poppeller has grown used to examining the legacies of Ukraine’s period as part of the Habsburg Empire. Whenever she visits the Ukrainian regions that once formed part of the sprawling Habsburg domains, local officials love to show her the buildings of the era. “I get the sense that Ukrainians are increasingly taking pride in the Habsburg heritage we share. More and more Ukrainians are engaged in studying the Habsburg period and taking an interest in preserving this cultural inheritance,” the Ambassador observes.

On the day when she meets Business Ukraine magazine, Ambassador Poppeller is just back from a trip to Chernivtsi, the dreamy southwestern Ukrainian city with one foot in the Balkans that once ranked among the great cultural crossroads of the Habsburg realm. The city’s exotic past is still tangible in Habsburg architectural gems like the city’s opera house and its memorably eclectic Hogwarts-style National University complex.

Ambassador Poppeller says she was also able to sense echoes of the openness and tolerance that have come to characterize the relatively benign Habsburg era. When viewed against the grim and bloody backdrop of the twentieth century’s nationalist and ideological empires, the patchwork Habsburg Empire has taken on an air of almost quaint inoffensiveness. Nowhere is this truer than in Ukraine, where subsequent tragedies have served to cast the Habsburg period in a particularly favorable light. “One can still feel this open spirit in Chernivtsi today,” Ambassador Poppeller says. “It is an openness rooted in the old traditions of everyday tolerance among different ethnic and religious groups living together. Just look at all the famous writers and poets who flourished in this vivid intellectual climate of multicultural tolerance.”

Ambassador Poppeller speaks of the shared Habsburg past as a source of pride for contemporary Ukrainians and Austrians alike, arguing that this common heritage can serve as a bilateral bridge while also helping Ukraine along the road to closer integration with the wider European community. Austria’s Habsburg inheritance has already played a role in the development of bilateral business relations, serving as a spur to eastwards expansion since the early 1990s as Austrian investors led the post-Soviet push beyond the Iron Curtain.

Despite a population of just under nine million, Austria has consistently featured among Ukraine’s top ten investor nations, currently occupying fifth position in the annual ranking. This disproportionate prominence is part of a broader regional investment strategy promoted by Vienna that dates back to the end of the Cold War and drew also on cultural affinities rooted in the Habsburg epoch.

“Some Austrian companies have always enjoyed good ties with the nations of the former Eastern Bloc,” offers Ambassador Poppeller. “There is a shared cultural awareness rooted in the Habsburg experience. As a neutral country during the Cold War itself, Austria was also in a good position to take advantage of the new business opportunities that arose in the 1990s. Austria had become home to significant communities from Eastern Bloc countries thanks to waves of immigration following the 1956 Hungarian Uprising, the 1968 Prague Spring, and the Solidarity movement in 1980s Poland. This helped to create the conditions for Austrian investment following the end of the Cold War. Once the Iron Curtain fell, Austrian businesses quickly began to prioritize eastward expansion.”

The first markets to feel the effects of this Austrian investment outreach were the country’s immediate Warsaw Pact neighbors. The second wave included countries like Ukraine, with Austrian banks and insurance companies leading the charge. It was not only this feeling of “a shared past” but also the competence and excellence of Austrian industry, technology and craftsmanship that has helped Austrian business to perform so well in foreign markets, stresses the Ambassador. “We take pride in the fact that Austria tops the country ranking of “hidden champions per capita”, companies who are world leaders in what they are producing, some of them very specialized high tech companies.”

In common with most of the Kyiv diplomatic community, Ambassador Poppeller identifies corruption and rule of law concerns as the major obstacles to further international investment, a verdict that leads her place judicial reform at the top of Ukraine’s current priorities. “The Association Agreement with the European Union has created an entire reform agenda that will bring the country into line with EU standards. This is necessary because there are still a lot of laws that are relics of the Soviet era. Nevertheless, the most important issue remains the reform of the courts. This is crucial in order to generate a sense of trust among both Ukrainian citizens and international investors. Many potential investors currently shy away from Ukraine because they do not want to risk the uncertainties of the Ukrainian court system.”

She believes an anti-corruption court may be the best solution, at least in the medium-term until the overall court system can be fully overhauled. “Ukraine now has a number of new institutions that are doing a relatively good job of investigating corruption, but if you cannot then bring suspects to court and achieve convictions, it does not instill trust.”

One of Austria’s specific contributions to the reform process is a rural development program designed to raise standards of living in Ukrainian village communities via the establishment of cooperatives. “Developing rural areas is a very Austrian objective. We Austrians tend to look after the countryside,” says Ambassador Poppeller. One particularly eye-catching project involves support for an agricultural cooperative set up by a group of ATO veterans in the countryside north of Odesa. Another features a dairy production cooperative in a village close to Chernivtsi that helps families with their own livestock produce cheese for regional markets. “We see it as a way of giving rural Ukrainians an opportunity to earn a living without having to migrate to towns and cities,” she explains.

Ambassador Poppeller is particular engaged by the idea of providing Ukraine’s conflict veterans with help reintegrating into civilian society, something she recognizes as a major challenge for the country as it seeks to move beyond the current conflict footing. She has paid numerous visits to frontline communities close to the conflict zone, giving her first-hand insight into the scale of the human suffering in eastern Ukraine. “This conflict needs to end today and not tomorrow,” she says. “I know it is not up to Ukraine alone, but the international community must continue efforts to resolve the conflict. The living conditions for those living close to the fighting are awful, especially for the poor and the elderly. It is a very sad situation.”

The ongoing military conflict in the country has done much to color perceptions of Ukraine among Austrian audiences, serving to deter potential investors and creating the unduly dire impression of a war-torn land. Ambassador Poppeller recognizes the inevitability of such negative generalizations and says she would like to see greater efforts made to promote alternative Ukrainian narratives among international audiences. “Military conflict is never good for a country’s reputation but there are ways of countering these damaging perceptions.”

She identifies the country’s contemporary cultural wealth as one of Ukraine’s strongest image tools and stresses that this could prove particularly potent in Austria itself. Numerous Ukrainians have gained considerable prominence in the world of Austrian classical music and already serve as informal cultural ambassadors. Official informational support could help to amplify this effect.

Thirty-nine year old Ukrainian Oksana Lyniv (pictured above with Ambassador Poppeller) is a great example of the potential for cultural outreach of this nature. Lviv prodigy Ms. Lyniv has attracted international headlines and garnered considerable Austrian media attention following her recent appointment to the prestigious post of chief conductor at the Graz Opera and Graz Philharmonic Orchestra. “Promoting people like Oksana Lyniv as representatives of today’s Ukraine is a great way of challenging and changing perceptions about contemporary Ukrainian realities,” Ambassador Poppeller says. “Ukraine has an abundance of cultural talent performing all over the world. These personalities can play an important role in connecting the country to the rest of Europe.”