“The illegal annexation of Crimea and the unlawful Russian actions in eastern Ukraine represent the greatest challenge to the European security architecture since the end of the Cold war.” 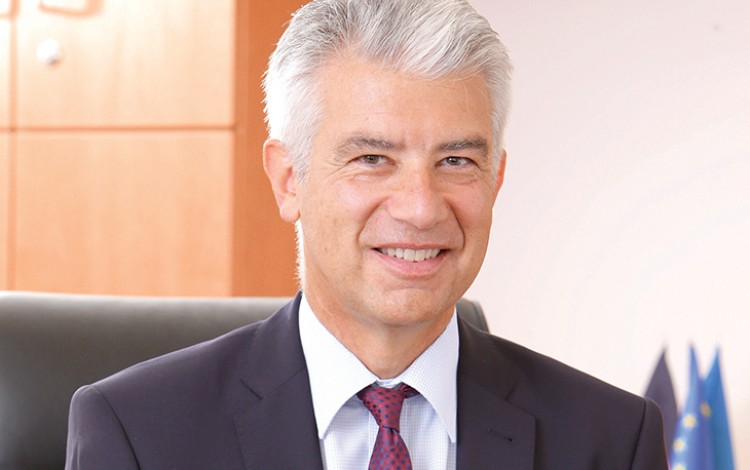 About the interviewee: Dr. Ernst Reichel is the German Ambassador to Ukraine
Business Ukraine magazine

Kyiv must currently rank as one of the most challenging and important German ambassadorial postings in the world. What are your priorities as Germany’s new Ambassador to Ukraine?

My priorities are closely linked to Germany’s role in Ukraine at this point in time. This means that I will put emphasis on two things: Firstly, the implementation of the Minsk agreements. I am convinced there is no better alternative for Ukraine than to fully support these agreements. The final goal of the agreements is the restoration of Ukrainian sovereignty over the entire conflict zone. The cessation of hostilities and the restoration of economic activity in the east are also in the economic interests of the entire country. The second priority is Ukraine’s comprehensive reform agenda and the continuation of reform dynamics. Ukraine represents business opportunities and has untapped potential, but economic development is linked directly to the effective implementation of its reform agenda. There is a tremendous amount of international capital available globally that is seeking investment opportunities. It is Ukraine’s job to attract this capital by creating beneficial conditions. This means an effective, corruption-free administration and justice system.

Ukraine is currently at the top of the geopolitical agenda and is at an historical, political, cultural and civilizational crossroads that has implications for the entire region. How did you familiarize yourself with these complex issues in preparation for your posting to Kyiv?

I have been to Kyiv a few times before my current role and gained knowledge and experience at previous postings abroad as well as at the Ministry of Foreign Affairs in Berlin where I was head of department for Russia, Ukraine, Belarus, Moldova and the Eastern Partnership some five to ten years ago. I also read a lot, especially literature on the history of Ukraine. I found it particularly interesting to read about conflicting narratives of Ukrainian history as the Swiss historian, Andreas Kappeler, has demonstrated in his works. Another work that made a great impression on me is called “Decision in Kyiv” by the German historian Karl Schlögel, who portrays Ukrainian cities in a very extraordinary manner.

Germany has played a key role in maintaining a united European response to Russian aggression in Ukraine. How do you intend to work with your EU diplomatic colleagues in Kyiv to maintain this united stance?

From the very beginning, our response has been a joint one: together with our European and international partners, Germany fully supports Ukraine´s territorial integrity and sovereignty. We do not recognize the annexation of Crimea by Russia. This results in very concrete actions. For example, the European Union has recently prolonged sanctions for another six months against 146 people and 37 internationally operating companies believed to contribute to the unlawful Russian activities in eastern Ukraine. This decision reflects consensus among the 28 EU member states. And of course, such a decision involves debate and discussions not only in the capitals of European Union member states but also here in Kyiv. Some sanctions aim to trigger Russian implementation of the Minsk agreements, others to impose costs on Russia for its illegal annexation of Crimea. It was clear from the outset that if Russia takes the steps we expect, the sanctions will have done their job and can be lifted. They were never intended as an indefinite punishment.

Germany has supported Ukraine’s post-Maidan reform efforts with a range of bilateral initiatives. Where do you see Germany being able to have the greatest impact on the Ukrainian reform process?

In the aftermath of the Revolution of Dignity, Ukraine has launched reforms in many areas and on an unprecedented scale. Let us take the allocation of public funds: ProZorro, the new E-procurement system, enjoyed support from the Deutsche Gesellschaft für Internationale Zusammenarbeit (GIZ). It creates savings for the budget that would otherwise have gone into corrupt schemes. Other important reforms include the national police, banking sector reform, the establishment of new institutions to combat corruption, and the elimination of energy sector subsidies that were particularly prone to corruption, to name only a few.

Reforms are moving in the right direction but often doing so too slowly. They are encountering a lot of resistance in their implementation, as the recent introduction of the e-declaration system showed. I believe that in the shorter term, practical implementation of justice reform will be key. This is important to reduce the sense of impunity among wrongdoers, but also to create stable and reliable investment conditions.

Germany, in close harmonization with the EU and other important donors, provides extensive support in a combination of short-term emergency aid measures along with medium and long-term support to tackle structural deficiencies. Our assistance is closely linked to the Ukrainian reform agenda. In addition, we provide support where our own experiences enable us to foster significant change: energy and resource efficiency; economic development and infrastructure; decentralization and municipal self-administration; rule of law; fostering civil society, education, sciences and media.

You spent the past three years at the Foreign Ministry in Berlin. How have attitudes towards Ukraine among the German diplomatic and political communities evolved since the Euromaidan protests began in late 2013?

Euromaidan shed a completely new light on Ukraine in the eyes of the German public. It created the impression of Ukraine as a place where people stood up for their country and made a strong choice for a better life in a European-oriented society. Let me add that I am very impressed and pleased by how much attention and effort is devoted to Ukraine by our government, our Chancellor and many other German politicians. I am certain that Ukraine will remain a real priority for us, despite other international political crises. But there are also high expectations in Germany towards Ukraine: not to lose momentum in Ukraine’s struggle for significant and lasting reforms according to European standards. Even more importantly, I am convinced this is what the Ukrainian people themselves expect from their political leadership.

Germany spent much of the post-Soviet era seeking to build strong business ties with Russia, making the current confrontation with Moscow particularly unwelcome for many in German business circles. How can German diplomacy strike a balance between furthering German business interests in Russia and upholding European security interests in Ukraine?

There cannot be a trade-off between business and security interests in Europe - they are inseparably intertwined. Respect for international law and a viable security order in Europe are preconditions for the sustainable future of this continent. That includes economic development. The illegal annexation of Crimea and the unlawful Russian actions in eastern Ukraine represent the greatest challenge to the European security architecture since the end of the Cold war. These events have seriously damaged Russian-German political as well as economic relations. The sanctions applied against Russia do harm to the German economy as well as other European economies. But there is a political prerogative to lifting the sanctions: They are directly linked to the implementation of the Minsk agreements. This has been the German and European stance all along.

After many months of stagnation, tireless efforts behind the scenes have been gaining some momentum. The signing of the Trilateral Contact Group’s framework resolution on disengagement of forces on 21 September as a new instrument to calm the situation along the line of confrontation was an important step to ensure that weapons remain silent. Disengagement along the entire line of confrontation must be ensured. Making progress on this issue was also the goal of the joint visit of Minister Steinmeier and his French counterpart to Ukraine in September. Of course, a sustained ceasefire alone will not ensure implementation of the Minsk agreements, but without it, we will not make any political headway. Without the willingness by the parties to the conflict to adhere to previously made agreements, there will be no progress. Instead, it will perpetuate a situation that gravely harms Ukraine. Germany expects constructive and intensive work on implementing the Minsk agreements. This means, inter alia, that Ukraine cannot assert 100% of its interests. We are strongly convinced that it is more beneficial for Ukraine to have the Minsk agreements and implement them rather than to be in a situation where there are no agreements with Russia.

The opening of the German Chamber of Industry and Commerce in Kyiv comes as German exports to Ukraine are growing at an impressive rate. Where do you see the greatest opportunities for further strengthening of bilateral trade ties?

We are obviously glad to see German exports to Ukraine on the rise but I would like to draw your attention to the fact that Ukrainian exports to Germany are also growing: Between January and July 2016, they have grown by 3.5% compared to the same period in 2015. I am sure we can expect further growth in future, particularly if Ukraine continues to conduct genuine reforms and Ukrainian companies keep implementing EU standards in their production processes. Quite a few German companies are not only exporting to Ukraine, but are also investing in Ukraine, thereby creating jobs as well as generating higher revenues for the Ukrainian state and regional budgets. To give you just one example: many Ukraine-based affiliates of German companies produce parts for the big German car producers (Daimler, BMW, Audi, Porsche etc.). I think there is huge potential for further growth in this sector, given Ukraine´s qualified labor force and proximity to the German market.

Ukraine has to continue improving the general business climate in order fully realize the country’s potential. I already mentioned two key aspects: every investor needs a well-functioning, independent and reliably uncorrupt justice system. Freedom from bureaucratic “harassment”, where corruption is often at the core, is also crucial. If Ukraine continues in this direction and decides to implement the norms and standards established in the Deep and Comprehensive Free Trade Agreement (DCFTA) with the EU with even greater vigor, I am absolutely convinced German–Ukrainian bilateral economic ties will benefit hugely.

On a personal level, what has surprised you most about life in Kyiv since your arrival in the Ukrainian capital?

My first job abroad after I became a diplomat was in Leningrad, back then still part of the Soviet Union. As a result, I became a first-hand witness to the successful independence movements in the Baltic States, something that deeply impressed me and influenced my political convictions. Since then, although I have worked on the region a lot, this is the first time I actually find myself living in the region again. What strikes me most is the fact that Kyiv is a modern, liberal and free place. It does not feel Soviet or post-Soviet any more. It simply feels like a part of Europe, which of course it actually is.