SUSAN DANGER: Ukraine should seek to develop a higher profile for itself in Brussels 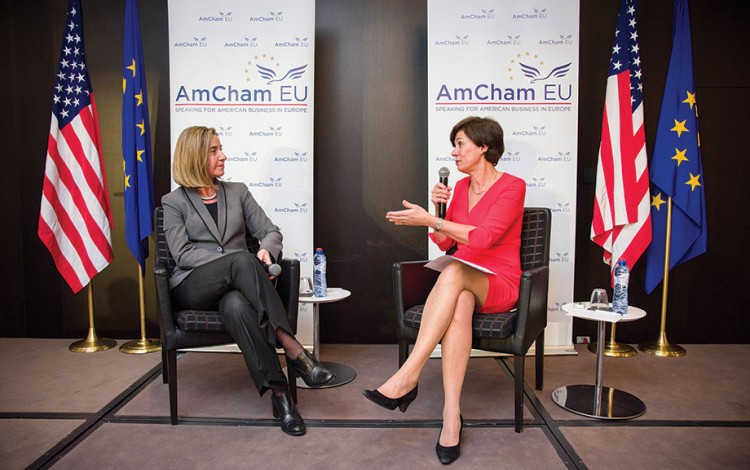 About the interviewee: Susan Danger (right) is CEO of the American Chamber of Commerce to the EU
Business Ukraine magazine

As CEO of the American Chamber of Commerce to the EU, Susan Danger knows all about the importance of effective communication campaigns in Brussels. Ms. Danger was at the forefront of AmCham EU’s recent award-winning multimedia efforts to promote the benefits of the European Union’s single market, and received recognition from politico.com in 2016 as one of the top twenty women influencers in the EU capital. She came to Kyiv for the first time in early 2018 as guest of American Chamber of Commerce in Ukraine to attend the Chamber’s annual Membership Appreciation Meeting. During her visit, she spoke to Business Ukraine magazine about the communications issues Ukrainians face as they seek to keep the country as high as possible on Europe’s political and economic agendas.

In her role at the helm of AmCham EU, Ms. Danger focuses primarily on European Union themes. She says developments in key neighborhood countries like Ukraine are very much on the Brussels radar, but cautions against any assumptions regarding the extent of EU interest. Instead, she points to the many major internal issues currently preoccupying EU leaders such as Brexit, Transatlantic trade and the future of the single market.

Ms. Danger says Ukraine’s European choice has clearly registered in Brussels, but argues that the country could benefit from efforts to promote itself more actively. “Ukraine has a reputation as a country that sees itself moving closer towards the EU, but there is also recognition that this is a long process,” she says. “While there are reports that the pace of Ukraine’s transition may be slowing, I am hearing from institutions that progress continues. That should be the preferred narrative. It is vital for Ukraine to demonstrate that it is becoming more attractive to investors and moving forward.”

Since 2014, there have been a number of initiatives to raise Ukraine’s profile in Brussels. Ms. Danger supports the idea of prioritizing this direction further, arguing that it is important for Ukraine to have both an active EU-wide communications strategy and a strong physical presence in the EU capital itself.

In common with many international observers, she says virtually all the media coverage of Ukraine she encounters relates to the ongoing conflict in the east of the country and the problems of institutional corruption. An emphasis on positive developments taking place in Ukraine could help to move the country’s image gradually away from these damaging negative associations. “As the country looks to develop its EU communications strategy, Ukraine could benefit from a greater focus on success stories like the Ukrainian IT sector,” she says. “You cannot expect to change a country’s international image overnight, but shifting attention towards attractive themes like the expanding IT sector would help to move the discussion away from negative perceptions. Ukraine has a very highly skilled and well-educated workforce, while at the same time being extremely competitive in terms of costs. Those factors can serve as the ingredients of a potentially persuasive narrative.”

Ms. Danger’s own most recent communications campaign experiences have convinced her of the need to make sure that whatever you are trying to say, it is crucial to make it as relevant as possible to individual audience members. Her AmCham EU campaign highlighting the benefits of the European Union’s free trade zone won plaudits by offering specific insights into the ways free trade had improved everyday life for ordinary EU citizens. She now sees this story-telling element as an essential tool.

In an era where facts are often no longer sufficient to win the argument, Ukraine can also learn from this experience. “Events in recent years have shaken people all over the world out of a kind of complacency rooted in the idea that facts speak for themselves and audiences will always eventually ‘get it’. Things like the Brexit vote have made us realize that this is not always the case,” she says. “Whether it is EU free trade or Ukraine seeking to present itself as an attractive potential partner, nobody can afford to be complacent. Instead, the key is to tell your story in an engaging and relatable manner.”