No ceasefire in east Ukraine

Interview: US combat veteran embedded with the Ukrainian army 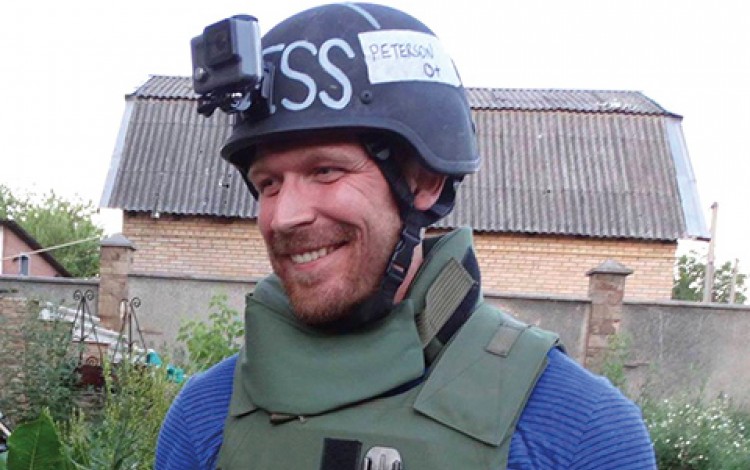 After more than a year fighting in east Ukraine, this summer the Ukrainian authorities finally initiated an embedding programme allowing foreign correspondents to spend time alongside Ukrainian troops on the frontline of the conflict. The programme aims to give global audiences an insight into the reality of the conflict by allowing journalists unhindered access to Ukrainian forward positions. Getting the Ukrainian military top brass to accept embedded foreign correspondents was no easy task, but the stakes for the country could hardly be higher. Ukraine is fighting for its continued existence as an independent state, and there is growing recognition among army chiefs that the battle against Russian propaganda is every bit as important as the military confrontation on the ground in east Ukraine.

One of the first reporters to embed with the Ukrainian troops was US army combat veteran turned war correspondent Nolan Peterson, who writes for The Daily Signal. With his hipster beard and Marine Corps physique, Mr. Peterson is a war reporter straight from Hollywood central casting, but there was nothing glamorous about this particular assignment. He readily admits that none of his experience while on active service in the US army prepared him for the intensity of the fighting in the Donetsk region village of Pisky, where he spent eight days embedded with Ukrainian forces. “In Iraq and Afghanistan you would gear up before heading out on a specific mission. In Pisky, death can come at any moment. You could get killed going to the bathroom. You can die eating dinner or taking a shower,” he reflects.

Officially, the conflict in east Ukraine is no longer being fought at full throttle. The Minsk II peace plan signed in February introduced a nominal ceasefire throughout the conflict zone, but Mr. Peterson saw little evidence of any lull in the fighting in and around Pisky. He confirms that on the stretch of the frontline where he embedded, Ukrainian forces remain under near-constant attack from both shelling and snipers. “They’re entrenched in these fixed locations and getting hammered every day by heavy artillery and tanks, with drones flying overhead non-stop,” he says. “How long can they just sit there, weathering these attacks?’

The quiet determination and mental toughness of the Ukrainian soldiers he encountered is a recurring theme in the American correspondent’s recollections of his time at the front. “I thought their mental strength was pretty remarkable. What’s most amazing is that many these guys are just a two- or three-hour car drive away from their wives and kids, from their friends and families. And yet most of them haven’t been home in five or six months. Instead, they’re living in this hell. Home is so close, but they might as well be on the moon. I don’t know how they have the mental strength to do it,” he comments.

Mr. Peterson believes that the support the frontline troops receive from the Ukrainian volunteer movement is of huge psychological importance, serving to remind the soldiers that they are not alone and have not been forgotten by the Ukrainian public. He remains visibly amazed by the scenes he witnessed in Pisky of civilian volunteers driving right up to frontline positions in order to deliver the latest batch of aid, and argues that this continued backing from members of the public plays a key role in helping to maintain army morale.

He was also struck by the hundreds of children’s drawings and messages of support that the Ukrainian troops use to decorate their shelters and forward positions. In the hyper-masculine world of frontline combat, the childish innocence of these pictures offered a startling contrast that made a deep impression on the American reporter. “They put those kids’ drawings up everywhere,” he recalls. “Nobody talks about it openly, but I think those pictures are exactly what sustains them mentally.”

Truth as the ultimate infowar weapon

As an embedded journalist, for a brief period Mr. Peterson found himself sharing the day-to-day risks that the Ukrainian troops are living with. He carries a sniper’s bullet that he says came within inches of killing him, and claims to have experienced life-threatening situations on every single one of the eight days that he spent at the front. Mr. Peterson’ background as a US army combat veteran worked in his favour when it came to winning the confidence of the Ukrainian troops he was shadowing, but he insists that he did not let the inevitable sense of camaraderie that developed between them spill over into his reporting. “Journalists are not soldiers and it is not my job to fight Ukraine’s war for them,” he states.

Nevertheless, Mr. Peterson is acutely aware that the conflict in east Ukraine has a strong informational component. He argues that the key to winning this information war is honesty. “I have heard a lot of Ukrainian journalists saying that it is pointless trying to fight propaganda with propaganda. You can’t beat the Russians at their own game,” he reasons. In this sense, the American reporter sees the Ukrainian embedding programme as a step in the right direction. “What they’re doing with embedded journalists is actually an indication that the Ukrainians have realized the importance of letting the truth be told, warts and all. This is the best way to push back against Russian propaganda. Western audiences are very distrustful of one-sided or overly positive coverage on any issue. But when you show the naked truth, as I was given the opportunity to do in Pisky, people will treat it with more trust.”

Bringing the realities of the east Ukrainian conflict home to international audiences is an increasingly difficult task given the notoriously short attention spans of modern viewers and the information overload of the 24-hour news cycle. Mr. Peterson says one of the biggest challenges he faces as a war correspondent is keeping the Ukraine story relevant to Western audiences. “I didn’t want to go on a ‘war safari’ and just take pictures of things blowing up,” he explains, “because American audiences are already inundated with those kinds of scenes from all over the world.”

Instead, the Florida-born journalist says he attempts to place coverage of the fighting in east Ukraine within a broader geopolitical narrative. “You can’t report on Ukraine in a contextual vacuum,” he comments. “It is a far larger story and one that international audiences need to know about. A continental shift is taking place right now. This could be like the 1930s in Europe, and could build up into an open confrontation between a NATO member country and Russia.”

Mr. Peterson does not rule out returning to the frontlines for a second spell embedded with the Ukrainian army. If he does choose to head back to the front, it will mean crossing the almost surreal boundary between the devastated Donbas warzone and the rest of Ukraine.

Speaking to Business Ukraine magazine in the comfort of a Kyiv cafe, Mr. Peterson cannot help but marvel at the relative lack of evidence in the Ukrainian capital that the nation is actually at war. This is totally at odds with his own combat memories of Iraq and Afghanistan, where the theoretical battleground encompassed the entire country. For him, this makes the realities of the ongoing conflict on Europe’s eastern fringes all the more shocking. “Out there in east Ukraine, there is a weird boundary between war and peace. That’s what makes it so different to Afghanistan and Iraq. It’s a frontal war, with a contact line between two armies. One of the consequences is that when you are not physically close to the fighting, you don’t necessarily feel the presence of war. This makes the psychological transition from war to peace particularly difficult, because it happens so quickly.”