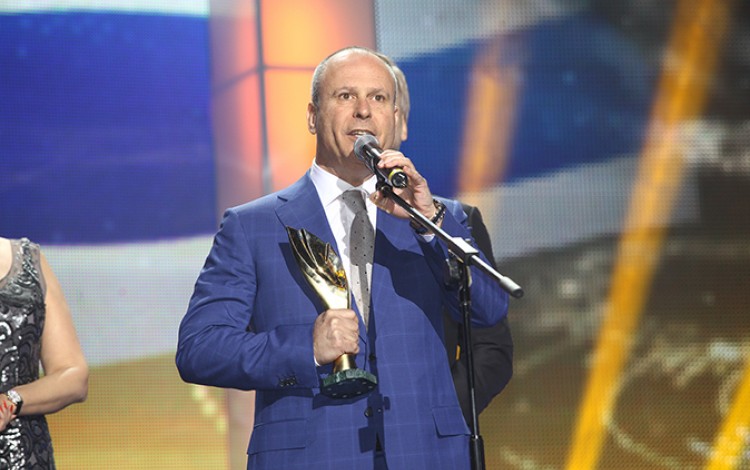 Ukraine’s Honorary Consul to Jerusalem Ofer Kerzner is known as an innovative businessman with a long history of investing in Ukraine. His efforts to support Kyiv creativity where recognized at the recent ‘Person of the Year’ awards in the Ukrainian capital. Kerzner was honored in the special nomination ‘Creative Investor in a Crisis Climate’ for the creative cluster project ‘Art-Zavod Platforma’ in Kyiv.

The ‘Art-Zavod Platforma’ initiative is a creative cluster in Kyiv designed to foster the development of the Ukrainian IT industry, education, music, design, fashion and the arts. It is a ‘city within a city’ with a specific focus on creativity. Ofer Kerzner is the man behind this creative cluster. He is the owner of the property development company City Capital Group and has been doing business in Ukraine for over 18 years.

In addition to ‘Art-Zavod Platforma’, his projects in Ukraine include Business Park on Kyiv’s Left Bank, Darynok Market Mall, exclusive villa complexes on the banks of the Dnipro River, the Park Avenue residential complex near Holosiyivskiy Park, a logistics park close to Boryspil Airport, an office centre in Podil, and much more.

Alongside these extensive business interests in Ukraine, Kerzner says he also devotes considerable attention to social and diplomatic activities. He is a member of the International Real Estate Federation, and has initiated and organized numerous visits for Israeli and Ukrainian businessmen and politicians with the aim of developing bilateral trade, boosting commercial ties, and fostering friendly relations between Israel and Ukraine. In recognition of these efforts to improve bilateral ties, in 2013 he was appointed Honorary Consul of Ukraine in Jerusalem.

Kerzner has established a reputation for applying an international, multicultural approach to key tasks, often employing cultural and social ideas designed to resonate among the emerging generation. He explains that this helps him to overcome cultural divides and build bridges between communities. This approach is prominent in the story behind the ‘Art-Zavod Platforma’ project. The first creative cluster in Kyiv, ‘Art-Zavod Platforma’ was founded in 2014 with the goal of serving as a focus for Kyiv’s creative economy. The objective was to establish a place where fresh, daring and extraordinary ideas could come to life. It was conceived as a place that would allow creative Kyivites to realize their dreams without having to leave the country.

Within the space of just one year, ‘Art-Zavod Platforma’ had established itself as a cult venue in the life of the Ukrainian capital. Today, it plays host to festivals, workshops, concerts and more. It has also fulfilled its initial aim of becoming a ‘city within a city’, housing offices, outlets, art galleries, showrooms for emerging Ukrainian designers, restaurants, concert stages and a recreation area.

“I am deeply convinced that Ukraine has huge potential and a great future,” Kerzner comments. “That is why I have continued to develop my businesses in Ukraine for many years despite numerous crises. Our projects in Ukraine are quite successful, which makes me - and investors like me - feel confident about tomorrow. I want the people of this country, especially the young people who will have to build a new Ukraine, to know that there are many businessmen all over the world who are ready to invest in Ukraine. It is a great honor for me and my team to receive this ‘Person of the Year’ award. It represents genuine recognition of our achievements and is proof of the fact that we’re moving in the right direction.”

EDITOR’S NOTE: Ukraine’s ‘Person of the Year’ national awards take place annually and date back to 1995. The awards recognize achievement in a range of Ukrainian fields including business, society, philanthropy and the arts.

Investing in Ukraine Ukrainian IT industry