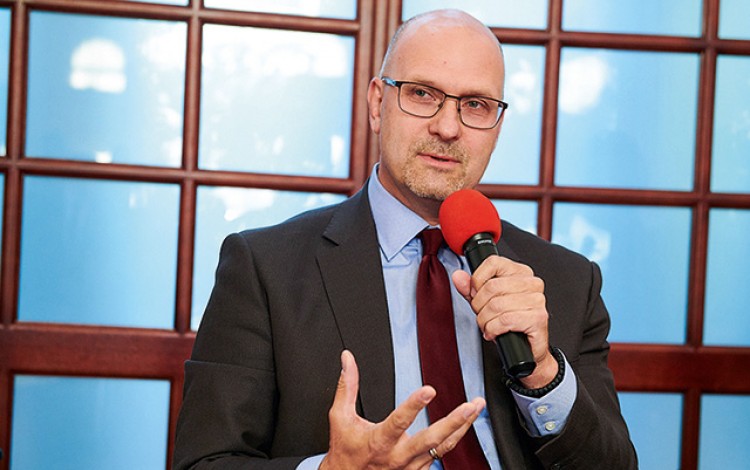 About the interviewee: Daniel Bilak served as Director of UkraineInvest then Chairman of the UkraineInvest Supervisory Board from 2016 until 2019
Business Ukraine magazine

For the past three years, Daniel Bilak’s role at the helm of the Ukrainian government’s investment promotion office, UkraineInvest, has placed him at the forefront of the country’s efforts to attract international investors. Since UkraineInvest’s establishment in October 2016, Bilak has overseen its evolution from a consultative body to the prime minister to today’s status as a full-fledged state institution.

He says this process mirrors the Ukrainian government’s increasingly strategic approach to when it comes to engaging with foreign investors. As he prepared to step down as chairman of the agency’s supervisory board in New Year 2020, Bilak spoke to Business Ukraine magazine about the challenges involved in changing attitudes towards Ukraine, and the importance of finding a point of relevancy with investors who often have little prior knowledge of what the country can offer.

Canadian-Ukrainian Bilak joined UkraineInvest in autumn 2016 direct from a senior executive position in the private sector in Ukraine. An intended one-year secondment turned into a three year engagement. During this time, he has regularly featured at investment events across the globe and in Ukraine, while working with successive governments and local authorities to achieve three key objectives: to help unblock impediments to further investment by existing investors in order to attract new FDI, to facilitate the improvement of the investment environment, and to institutionalize the functions of UkraineInvest as a permanent responsibility of the government toward the investment community. “

Based on feedback from the business community, I am satisfied with the results,” commented Bilak. “Through our joint efforts with the Prime Minister, the Government Investment Commissioner Oksana Markarova [now Minister of Finance], and other stakeholders such as the Business Ombudsman’s Council, we helped unlock about USD 3 billion dollars in investments from existing and new investors, and addressed systemic problems through changes to laws and regulations, such as reducing port fees and limiting the scope for law enforcement interference in legitimate business.”

Arguably UkraineInvest’s most significant achievement has been to challenge many of the negative narratives surrounding Ukraine’s investment climate. Bilak remembers at the outset being confronted by the country’s significant image problems. “There was a perception that Ukraine was backsliding away from the ideals of the Revolution of Dignity and towards old corrupt practices,” he says. While not all of the criticism was accurate, changing this narrative required a fundamental rethink of the way Ukraine interacts with the investment community. “From the very beginning, it was clear that we were not going to succeed unless all levels of government began treating investors like guests in their own home.”

Bilak and his team drove this message home with government agencies in Kyiv, as well as with regional administrations throughout the country. He has also communicated these messages internationally, with UkraineInvest being a major participant at Ukraine House Davos in 2019, before taking on the leading role in Ukraine House Toronto. The impact of the Canadian event can be gauged by the 1.5 million views it generated on social media. Bilak emphasizes Ukraine House Davos as a watershed moment for UkraineInvest. “When EBRD President Suma Chakrabarti declared at Davos that Ukraine was open for business thanks to the success of the government’s reform agenda, and when we got feedback from major investors that they perceived that Ukraine was a stable and predictable emerging market with measurable risks, we knew that our messages and efforts  were starting to pay off.”

Upbeat talk of this kind is relatively unusual, but Bilak stresses that in contrast to the typically gloomy coverage of Ukraine in the international media, this optimistic tone is more than justified. He points to the shift towards more positive attitudes over the past twelve months, reflected in surveys conducted by the American Chamber of Commerce and the European Business Association in Ukraine. This improving mood owes much to the gradual impact of reforms, most of which were rooted in the EU-Ukraine Association Agreement. “We are now seeing the results of the post-Revolution of Dignity reforms in areas such as public procurement, automatic VAT refunds, open data digitalization, and the gas sector, to name but a few. It is common to hear complaints that nobody has gone to jail for corruption, but these are all long-term institutional anti-corruption measures that have shone a light into the darker corners of the economy and created transparency. There was significant surprise when the Ukrainian economy reached two successive quarters of 4% GDP growth in 2019, but this strong performance actually reflects the impact of reforms that are already taking root.”

The Ukrainian economy’s increasingly robust performance has certainly made selling the country on the international stage less daunting. With everyone from the IMF and the World Bank to Fitch and Moody’s upgrading Ukraine in recent months, investors have also taken note. This has allowed the team at UkraineInvest to move beyond defending the country’s reform record to focusing instead on highlighting the more dynamic side of the Ukraine investment story.

“It is crucial to brand the country in a way that’s relevant to investors. We have to find common ground and make Ukraine real for them,” says Bilak. “Often the core of the problem is not Ukraine’s bad reputation, it’s the absence of any reputation at all. Most investors simply don’t know much about Ukraine. This is why sectors like IT and high-tech are particularly good topics for discussion. We want Ukraine to be seen as a global center of innovative technologies. When we discuss the number of leading global tech firms with R&D offices in Kyiv and other Ukrainian cities, or the emergence of a European automotive parts supply chain cluster in western Ukraine, this resonates with potential foreign investors. It is something they can easily get their heads around.”

Looking back at his three years with UkraineInvest, Bilak sees the October 2019 international investment forum in Mariupol as a particularly important landmark. UkraineInvest worked closely with the new Zelenskyy administration to stage the flagship event, which attracted hundreds of international participants to the eastern Ukrainian port city and demonstrated that the country was committed to moving forward with an ambitious economic growth strategy that envisages attracting USD 40 billion in investments over the next five years. “Mariupol was UkraineInvest’s big debut with the incoming government and helped cement our relationship,” he says. “It demonstrated that the UkraineInvest team was ready for primetime. We had passed the startup phase and were now entering the institutional phase. The role of UkraineInvest has evolved and will continue to develop as Ukraine itself grows. What will not change is our commitment to providing high quality services to the foreign investment community.”