LENNA KOSZARNY: We are witnessing the dawn of a free trade golden age between Canada and Ukraine 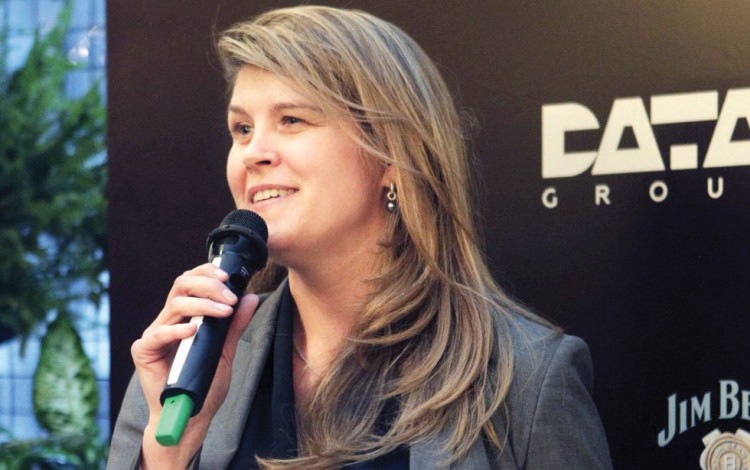 Ukrainian-Canadian executive Lenna Koszarny is one of the most high-profile figures in Ukraine’s international investment community. Based in Ukraine since the early 1990s, she has seen her ancestral homeland evolve through decades of geopolitical and economic turbulence and has been a key figure in many of the most significant international investment deals in Ukraine’s recent history. She spoke to Business Ukraine magazine about her personal bond with Ukraine and explained why she believes the Canada-Ukraine Free Trade Agreement marks the dawn of a new “golden age” between the two countries.

Where did you grow up in Canada and how conscious were you as a child of your family's Ukrainian roots?

I was born in London, Ontario. My parents thought they were having one child and were surprised when my identical twin sister and I were born within two minutes of each other! All of my ancestors are from Ukraine. My father’s family comes from Donbas region and the family of my mother are from Kropyvnytskyi. My grandparents were all “Ostarbeiters”, forced laborers brought to Germany and Austria from their hometowns in Ukraine during WWII. After the war, they spent time in a deportation camp before being accepted by Belgium (my father’s family) and Venezuela (my mother’s family), eventually making their way to Canada in search of a better life. Even though I was born and grew up in Canada, we were a proud Ukrainian-Canadian family. Our grandparents and parents instilled in us a love for Ukraine together with a belief that the country would be free of the Soviet yoke one day and that we have an obligation to preserve the Ukrainian language, culture and traditions. I vividly remember my grandfather’s Soviet dissident literature and reading “Black Deeds of the Kremlin” with him when I was nine years old. I spent my childhood in various towns and cities in Ontario as my father’s job meant we moved around a great deal, which is probably why my family is still extremely close to this day.

How long have you been active in Ukraine?

Last year was a pivotal moment in my life, marking the year that I have now spent more of my life in Ukraine than in Canada. This December, I will celebrate 25 years in Ukraine!

What are your current roles?

I am Founding Partner and Chief Executive Officer at Horizon Capital, the leading private equity firm in Ukraine with over USD 750 million in assets under management and backed by over 40 U.S. and European institutional investors. Beyond my role as CEO of Horizon Capital, I am also committed to improving Ukraine’s investment and business climate by serving on the boards of the American Chamber of Commerce and the Ukrainian Venture Capital and Private Equity Association. I also serve as Executive Vice-President of Western NIS Enterprize Fund. Additionally, I believe the Ukrainian diaspora has an enormous role to play in furthering Ukraine’s economic development and am proud to serve as a board member of the Ukrainian World Congress, uniting 20 million Ukrainians worldwide. I lead the UWC’s Economic Leadership Committee supporting Ukraine’s economic development.

What motivates you to build your career in Ukraine?

Prior to first arriving in Ukraine in August 1993 with my grandmother, I had never really considered coming to Ukraine. At that time, I had graduated from the University of Western Ontario (Richard Ivey Business School), obtained my CPA and had a successful career at Coopers & Lybrand (now PricewaterhouseCoopers). During those initial three weeks in Ukraine, I fell in love with this beautiful country and its generous, talented, wonderful people. I therefore decided to join a technology fund and move to Kyiv. Many of my colleagues from 1993 are still in Ukraine today, including Daniel Bilak and Christia Maciw.

I was always committed to Ukraine and its success throughout my career here. It is in my current role as an investor backing visionary entrepreneurs that I believe I can make the most positive impact in the country. I am proud that through the four funds managed by Horizon Capital, we have invested and catalyzed a total of USD 1.8 billion in financing for companies in Ukraine and the region, employing over 46,000 people. In addition to celebrating the success of the companies that we invest in, I am proud that we make an enormous contribution to the development of Ukraine, including attracting new institutional and foreign investors to the country, creating jobs, and expanding trade opportunities for Ukrainian companies globally, which leads to increasing the prosperity of Ukrainian citizens. All of this motivates me to work long hours, travel frequently, and to love what I do!

Since 2014, you have played a key role in many of Ukraine’s most prominent investment initiatives. What do you regard as the country’s most attractive investment attributes?

First and foremost, it’s the people – the new generation of young visionary entrepreneurs leading their companies in sectors with sustainable competitive advantages. Currently, Ukraine is attracting investor attention among those who are willing to look beyond the headlines and see opportunities with strong fundamentals such as companies led by entrepreneurs with a global reach and cost-competitive platforms powered by talented Ukrainian professionals. Today’s Ukraine is truly a nation of “brains, hands and grains”. We believe that IT, light manufacturing and food & agriculture will continue to drive Ukraine’s expanding economic prosperity.

The process has started already with the signing of the Canada-Ukraine Free Trade Agreement in July 2016, coming into force in August 2017. As a Canadian of Ukrainian descent, it was truly an honor for me to participate as a member of the 12-person delegation accompanying Prime Minister Justin Trudeau during his three-day visit to Ukraine in 2016. This is the beginning of what we foresee as a “golden age” for economic ties between both countries.

Business is driven by people and it all starts with relationships, networks and mutually-beneficial opportunities. After investing in Ukraine in the 1990s, members of Canada’s Ukrainian diaspora are once again considering business opportunities in the country, both in startups and mature companies. What attracts them is the “generational shift” in today’s Ukraine, with the emergence of a new generation of progressive young company founders and entrepreneurs they are comfortable developing partnerships with.

The diaspora has always backed Ukraine but this requires trust, transparency and sharing in the profits of the business they build together. The more success stories that come out of this reset in economic ties, the more new opportunities will arise. I always urge all of my Canadian and Ukrainian business colleagues to bear in mind that they are ambassadors of their respective countries and to make sure that they hold themselves to the highest standards. Otherwise, they may be the reason for halting the reset in economic relations that has begun. At the same time, it is important to stress that it is not just the diaspora viewing Ukraine as a land of opportunity. Canadian companies beyond the diaspora are also drawn to the “brains, hands and grains” that Ukraine and its people offer.

You have been intimately involved in efforts to raise Ukraine’s international profile and improve outside perceptions of the country. Based on your personal experience, what do you regard as the key current strengths and weaknesses of Brand Ukraine?

People are what stands behind the national brand and much of the strength in Brand Ukraine depends on the new generation of Ukrainians. This means startups, fashion, culture and more. I am proud that Brand Ukraine is currently coming into its own. It is significant that according to Brand Finance, in the space of just one year from 2015 to 2016, the country moved from the bottom five worst performing brands in the world to the top five best performing. This remarkable turnaround is entirely due to the efforts of the people of Ukraine and the business, government and civic society ambassadors who are traveling the globe to spread the message about the transformation in progress in Ukraine. I have travelled to more than 25 countries myself and reached out to over 300 investors to communicate my belief that Ukraine offers a ground-floor opportunity for international investment. I urge investors to come to Ukraine and see for themselves.

This week alone, I will be presenting to investors in Europe, speaking at the Copenhagen Reform Conference, and presenting Ukraine in a seven-minute speech at SuperReturn in Amsterdam, a conference for private equity investors. I will then be flying to Lviv to speak at IT Jazz and Canada House before participating in a ceremony to mark the launch of Lviv’s IT Park. I was proud to be a member of the Ukraine House Organizing Committee in Davos in January this year and for Horizon Capital to sponsor a panel during this historic event. The mission behind Ukraine House was to amplify Ukraine’s voice on the global stage. In particular, this means the voice of the new generation that is powering Ukrainian startups and IT companies. I am hopeful that our joint efforts to shine a spotlight on the creativity, innovative spirit and opportunities that Ukraine offers will result in a paradigm shift in investor perceptions of our wonderful country and its talented people.

Your professional life brings you into contact with people from across the globe who are considering investment opportunities in Ukraine. What are your top tips for Ukrainian companies and individuals looking to attract international investment?

I have only one tip. Trust and reputation take years to build and can be destroyed in five seconds. At the end of the day, reputation is all that we have. Make sure you treasure it and value it. If you do so, you will attract investors who will back you.