MH17 sleuth Eliot Higgins: ‘I would be embarrassed if I had to lie like Putin does about Russia’s involvement in Ukraine’ 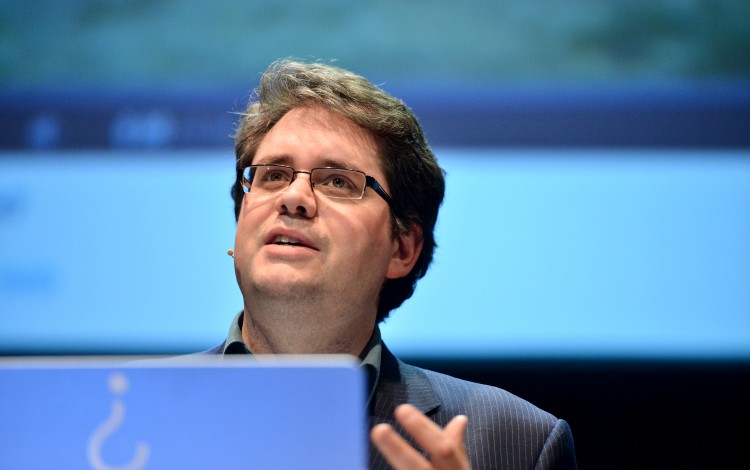 Vladimir Putin’s hybrid war in Ukraine is widely acknowledged as the first conflict of the Information Age. The Kremlin has successfully deployed an innovative array of traditional and new media tools in its hybrid attack on Ukraine, providing a model for a new form of warfare where propaganda is no longer of secondary importance but is instead capable of manufacturing and fuelling entire armed conflicts. The Kremlin’s sophisticated use of the internet has been particularly striking, but enhanced access to online information has also proved the Achilles Heel of Moscow’s information offensive.

Social media has provided a treasure trove of information debunking many of Russia’s key narratives. Hard-hitting investigations like VICE News correspondent Simon Ostrovsky’s award-winning ‘Selfie Soldiers’ report have been based almost entirely on social media posts by Russian soldiers. The most prominent open source evidence exposing Russian disinformation has come from UK-based citizen investigative journalist group Bellingcat, which has been behind a series of reports exposing everything from the presence of Russian troops in east Ukraine to the role of the regular Russian army in the shooting down of civilian flight MH17 in July 2014. Business Ukraine magazine spoke to Bellingcat founder Eliot Higgins about the changing face of information warfare and asked him how analysis of open source online data will shape future 21st century conflicts.

Your group has recently named 20 Russian soldiers implicated in the downing of flight MH17. Do you believe these individuals will ever face justice?

This has been widely misreported. To be clear, those 20 individuals are people we believe are most likely to know the identities of the people who shot down flight MH17, and the orders received in relation to why the BUK (anti-aircraft missile system) was in Ukraine in the first place, with a possibility some were directly involved with the launch of the missile. There are also dozens more individuals we have identified who are likely to know something, but we believe these 20 individuals are the most useful to the investigation. I think there are many paths to justice and I am sure Russia will try its hardest to avoid going down any of them

As commander-in-chief of the Russian Armed Forces, Vladimir Putin bears ultimate responsibility for the deployment of Russian forces in Ukraine. Do you think there is currently enough evidence to place Putin himself on trial?

Without knowing what the joint investigation team has, it is difficult to make that judgment. Either way, it would be a miracle if Putin ended up in the dock.

Your work exposing Russian involvement in the MH17 attack and the Ukraine conflict has made you a target of online abuse and the subject of conspiracy theories. Has the tone of the response surprised you, and how have you coped with the personal nature of these attacks?

I used to write on Syria a lot, and the tone of Assad defenders is no different to that of Putin defenders, so it was not surprising. What did surprise me was how aggressive Russia Today was. I expect a certain pretense of professionalism and neutrality from them, but even by their own low standards, their attacks on Bellingcat and myself were quite surprising to the point of unintentional self-parody.

The Russian disinformation campaign surrounding MH17 has served as a wake-up call for many people who might otherwise have remained ignorant of Kremlin disinformation techniques. In this sense, Russian efforts to deflect blame for MH17 could be seen as counter-productive. Why do you think the Kremlin has been so relentless in its efforts to muddy the waters of the MH17 investigation, even if this has proven detrimental to the country's broader international credibility?

Because that is how they have always worked, and it is what had worked for them in the past. The problem is now they have less control of the message and can be more easily exposed as liars. The only counter is to start telling the truth, which seems to be an alien concept to the Russian government. Even if they did, who would trust their word alone at this point?

The MH17 investigation has become a battleground for all manner of conspiracy theorists. Many continue to trumpet long since discredited theories regarding the presence of Ukrainian jet fighters, altered flight paths, mysterious Spanish air traffic controllers and so forth. What has your experience of the conspiracies surrounding the MH17 probe taught you about the conspiracy culture of today's internet-driven information environment?

Basically what they are saying is "I'm smart and you're dumb", so anything that challenges this is dismissed as being part of the conspiracy, otherwise they'd have to admit they were dumb all along. The only people who take them seriously either have an agenda, want to make money off them, or are other conspiracy theorists. The best they can hope for is recognition on Russia Today or Sputnik (Kremlin-funded media outlets – Ed.).

During his December 2015 annual press conference, Vladimir Putin stated: 'We have never denied that there are (Russian) people in east Ukraine undertaking tasks, including of a military nature.' Many chose to interpret this as a change in policy away from previous Kremlin denials regarding a Russian military presence in east Ukraine. You have focused much of your efforts on exposing this military presence. Based on your knowledge of the evidence, do you think the Russian policy of blanket denials is tenable in the long term? Do you expect Putin to move gradually from denials to public recognition of the Russian military role, as he did over Crimea?

I think more and more people and resources are being focused on open source investigation, so, broadly speaking, these kinds of denials will be more rapidly questioned and debunked. As for Ukraine, in face of all the clear evidence, I would be embarrassed if I had to lie like Putin does about Russia's involvement in Ukraine.

It used to be assumed that access to greater amounts of information was empowering and would protect people from propaganda. The Ukraine crisis has shown that these assumptions were overly optimistic, with new media resources playing a key role in promoting deliberate distortions and false narratives. What does Russia's 'weaponization of information' mean for the future of the 'Information Age'?

I think we are now only really starting to see a push back against the sort of information warfare waged by Russia. Currently the biggest limitation is funding. There is plenty of material out there in need of analysis but more resources are required to work with it.

Critics of Bellingcat have sought to question the group's qualifications to handle complex data analysis. How would you characterize the response you have had from the international intelligence community to your work?

I've been told anecdotally by people with these sorts of connections that it's been very well received. We certainly have a lot of interest in the work Bellingcat does from a wide variety of organisations outside of the intelligence community.

Bellingcat has made headlines by investigating and analyzing open source materials that are publicly available on the internet. What security lessons should military professionals learn from your ability to make significant breakthroughs using open source information?

Either stop lying or become better liars. Also, learn how to do this yourself, as it does not look like soldiers will stop posting selfies anytime soon.