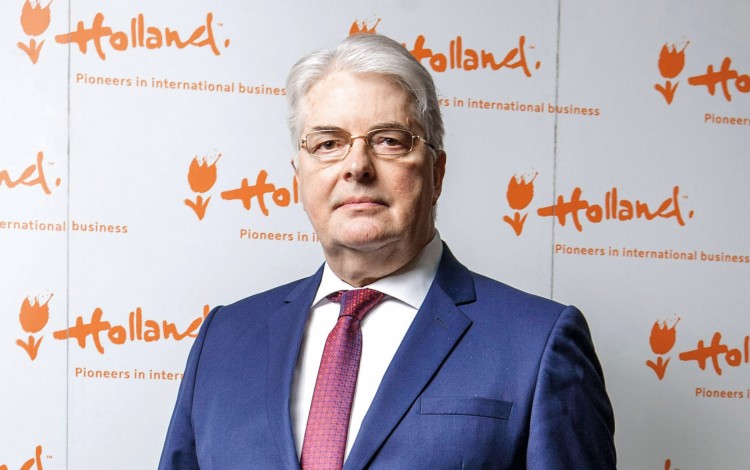 About the interviewee: Kees Klompenhouwer is the Netherlands Ambassador to Ukraine
Business Ukraine magazine

Spring 2016 is poised to be a particularly dynamic period in bilateral relations between the Netherlands and Ukraine. Mid-March will see a high-level business delegation arrive in Kyiv led by Netherlands Minister for Foreign Trade and Development Cooperation Lilianne Ploumen. This will be followed by a major Netherlands-Ukraine Business Forum in The Hague at the end of March. These events come on the eve of a Dutch referendum on the Association Agreement between the European Union and Ukraine which is scheduled to take place on 6 April.

The EU-Ukraine Association Agreement is the first issue to be put to national referendum in the Netherlands since the passing of the Advisory Referendum Act, which came into force in 2015. Many analysts regard the coming Dutch referendum as primarily an opportunity for anti-EU forces in the country to voice their opposition to the European Union in general, and to potential future EU enlargement in particular. Dutch critics of the EU-Ukraine Association Agreement have sought to portray it as a de facto stepping stone towards future Ukrainian membership of the European Union, despite the absence of any mention of a membership perspective in the agreement itself.

Dutch Prime Minister Mark Rutte has defended the Association Agreement as a step that opens up new markets for Netherlands businesses. “We are a trading nation. We live by free trade agreements and Ukraine is another example of this,” he commented in January. He has also been critical of the anti-EU expansion sentiment being promoted by ‘no’ campaign, arguing that the Association Agreement ‘has nothing to do with accession’.

With the ‘no’ camp facing accusations of seeking to play on Dutch voter concerns over further EU expansion, the trade delegation visit to Kyiv and Netherlands-Ukraine Business Forum in March will provide important and timely opportunities to highlight the potential commercial advantages of the Association Agreement. Business Ukraine magazine spoke to Netherlands Ambassador to Ukraine Kees Klompenhouwer about these key coming events and asked him what role he sees the Netherlands playing in Ukraine’s efforts to reform its economy and integrate into European markets.

What do you regard as the most attractive opportunities for Dutch businesses resulting from the free trade provisions of the EU-Ukraine Association Agreement?

Greater economic cooperation between the EU and Ukraine will offer both sides new benefits, including structural growth and job creation. These benefits derive from the progressive removal of customs tariffs and quotas, which will open up new markets. However, the biggest benefit will be Ukraine’s adoption of EU economic legislation. This will align key sectors of the Ukrainian economy to EU standards, which will further open up our respective markets.

Ukraine wants to harmonise its procedures with those of the EU. But implementation is a challenge. This will create ample opportunities to expand Dutch exports, not only of agricultural and industrial goods, but also of expertise and knowledge.

In the past year, Ukraine has made significant progress in reforming its procurement processes. It has implemented an improved system that ensures greater transparency across the board. This will allow Dutch service providers to bid for contracts on an equal footing. These are the steps that the Ukrainian government has already taken to improve the country’s business climate. Yet there is still much more to be done for Ukraine to harness its full potential. We’re not the only ones who want to see results. The Ukrainian people do too. Further steps will stabilise the economy and sustain the recovery that has already begun.

If ratified, the Association Agreement will serve as a compass to guide Ukraine in implementing its reform process. All this will create opportunities for traditional Dutch exports like dairy, potatoes and a range of horticultural products.

Still, it’s important to remember that the Association Agreement hasn’t been ratified yet. The Netherlands will hold a referendum on this issue on 6 April. The Dutch government continues to support the agreement and is backing a ‘yes’ vote.

What steps is the Dutch government taking to help Dutch and Ukrainian companies make the most of the opportunities offered by enhanced free trade?

The Dutch government is in favour of the effective implementation of Association Agreement and the trade benefits it brings. That is why we want to see a ‘yes’ vote on 6 April. However, at the same time, it is up to the Ukrainian government to implement its own reform agenda.

The Dutch government can share knowledge and expertise to support Ukrainian companies in entrepreneurship and trade. We can provide Dutch companies with all the information they need to help them do business in Ukraine.

In the Netherlands, the Ministry of Foreign Affairs, together with export support agencies, can provide information on markets. In Ukraine, the Netherlands Embassy in Kyiv can help companies with questions that are specific to the Ukrainian market. We also organise seminars and events for businesses to help them find suitable contacts and establish strong networks. In recent months, we have hosted a Holland Pavilion at an agriculture show in Kyiv and organised a trade mission to Dnipropetrovsk. We have also explored opportunities in the logistics sector in Ukraine. In addition, we support the Ukrainian government with our commercial knowledge. We have developed a training programme for advisors from the Ukrainian Chamber of Commerce, so that they can become export experts. We have also discussed challenges and opportunities for the Ukrainian clothing sector in the EU market.

The trade mission to Ukraine, led by Dutch Minister for Foreign Trade and Development Cooperation Lilianne Ploumen, and the Business Forum scheduled to take place in the Netherlands in late March, will be key opportunities to help Dutch and Ukrainian firms do business in each other’s countries.

Where do you see the greatest opportunities for Ukrainian companies seeking to develop partnerships in the Netherlands?

There are many ways for Ukrainian companies to forge partnerships and explore business opportunities in the Netherlands. For instance, last year a Joint Business Council was set up by the Confederation of Netherlands Industry and Employers (VNO-NCW) and the Ukrainian Chamber of Commerce. This could serve as a starting point for Ukrainian businesses looking to form partnerships in the Netherlands. Ukraine is committed to dramatically reforming its economy and industry. There are many ways that Dutch companies could help the country’s transition towards a modern economy. This includes investing in agricultural companies with know-how, in high-quality agricultural supplies or in equipment for agriculture and food processing. It could also include help with urban planning and the development of renewable energy resources. These are just a few examples. I would urge the Ukrainian private sector to reach out to Dutch companies to see what they can learn from each other. This way, both sides can benefit from building sustainable and profitable businesses.

Many international investors have adopted a ‘wait and see’ approach towards post-Maidan Ukraine in general and towards the country’s ambitious reform agenda in particular. Which aspects of the reform agenda are the top priorities for Dutch businesses as they assess the attractiveness of potentially entering the Ukrainian market?

Ukraine needs to keep improving its business climate. The Association Agreement provides the framework for the necessary changes. Fighting corruption is an important part of this. The main priority is harmonising laws, norms and regulations with EU standards in trade-related sectors such as agri-food.

Based on your experience of trade ties between the Netherlands and other EU neighbours with emerging economies, which countries could offer useful models for Ukraine when it comes to developing EU trade?

Other Central and Eastern European countries have gone through similar processes of EU integration and I would encourage Ukraine to learn from their experiences. The Dutch government supports the idea of the Visegrad Group (the Czech Republic, Hungary, Poland and Slovakia) teaming up to share their experience with Georgia, Moldova and Ukraine. These countries went through the same process, albeit in different stages. So it makes sense for them to work together.

In your view, what kind of impact might the EU-Ukraine DCFTA have on the overall EU economy in the medium to long term?

Creating structural, innovative growth and jobs is one of the priorities of the Netherlands Presidency of the Council of the EU. We believe that this can be achieved through sustainable trade and balanced trade agreements with third countries. Increasing trade opportunities with Ukraine will help strengthen the EU economy as a whole. Ukraine’s share in EU trade may not be so big now, but it is a market with over 40 million consumers. If Ukraine succeeds in reforming its economy, it has huge potential. And in the long run, this will create a stable and wealthy country.