OPINION: The future of European democracy “will be decided in Ukraine” 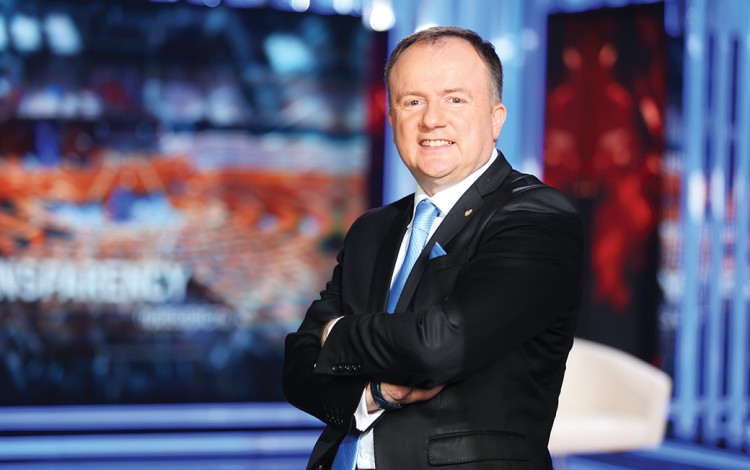 About the interviewee: Olivier Vedrine is a political scientist and TV host
Business Ukraine magazine

As the Western world struggles to come to terms with a hostile Russia, many in Ukraine fear that their country’s own Euro-Atlantic ambitions could yet be sacrificed to appease Moscow. Indeed, some believe a geopolitical perfect storm is currently heading straight towards Kyiv. Recent comments by European Commission President Jean-Claude Juncker calling for an end to “Russia-bashing”, coupled with German support for Moscow’s Nord Stream II pipeline project and French President Emmanuel Macron’s charm offensive in St. Petersburg, have led many Ukrainians to conclude that Europe is losing its appetite for confrontation with the Kremlin. Meanwhile, mounting frustration with Ukraine’s own meandering post-Maidan transformation is making it harder and harder for the country’s international backers to justify further costly support. Kyiv-based Frenchman Olivier Vedrine argues that in light of this increasingly unfavorable climate, it is now more important than ever to underline exactly what is at stake in the struggle between Putin’s Russia and the Western world. Vedrine remains convinced Ukraine will be the decisive battleground in this showdown. He is on a mission to bring this message to European audiences.

“Ukraine is the key,” says Vedrine as he sits down with Business Ukraine magazine for lunch in one of Kyiv’s many elegant French restaurants. “Europe simply cannot afford to let Ukraine fail, and Russia cannot be a truly global power without Ukraine. So all roads lead to Kyiv.” The Frenchman is a political scientist and TV host who has been based in Ukraine since 2012. He arrived in the Ukrainian capital following a career in academia and a long-standing role as a spokesperson for the European Commission. Vedrine is currently best known as the presenter of weekly English-language TV show “The Western Voice”, which airs in the original English and in Ukrainian translation on Obozrevatel media holding’s TV channel OBOZ.TV. Launched in December 2017, the show is Vedrine’s latest English-language venture as he strives to raise Ukraine’s international profile and provide foreign audiences with access to credible information about a country that he sees as still struggling to emerge from many decades of deliberate disinformation. “Even today, perceptions of Ukraine are still not very clearly defined in the Western world. These perceptions have long been distorted by Russian propaganda campaigns and russocentric narratives stretching all the way back to Soviet and even Tsarist times,” he says.

To counter the many misconceptions surrounding Ukraine, Vedrine seeks to offer alternative insights via his weekly TV show and through frequent media appearances, both in the former Soviet region and in his native France. He is also preparing for a series of university conference appearances in autumn 2018 which will allow the Frenchman to engage academic audiences within the EU. He hopes these conferences will encourage EU undergraduates to view Ukraine and the current confrontation with Russia in the broadest of geopolitical contexts. “We Europeans presently find ourselves at the biggest historical crossroads since the 1930s. The entire democratic system that emerged from the wreckage of WWII is facing unprecedented challenges. Ukraine is central to this struggle.”

To emphasize his point, Vedrine paints a markedly pessimistic picture of the Europe we can expect to encounter if Ukraine’s post-2014 transition fails and the country finds itself forced to return to the Kremlin orbit. “There would be a huge surge in support for Putin and his policies within the EU,” predicts Vedrine. “This would translate into greater electoral credibility for populist parties all over Europe and beyond. At the same time, the moral authority of the Western world would suffer a devastating blow. It would be a huge gift to Putin that would set the political tone internationally for many years to come.”

Even unapologetic advocates of greater Ukraine engagement like Vedrine recognize that in the current climate, any attempts to engage outside audiences on Ukrainian themes must contend with a mood of Ukraine fatigue that is becoming increasingly evident on both sides of the Atlantic. He says the best way to counter audience apathy and skepticism is by focusing on the localized success stories of individual Ukrainians who are changing their country at the grassroots level. “Whenever we speak about the new Ukraine, we need to make sure we are speaking about the people themselves. It is vital to move beyond abstract talk of democracy and introduce international audiences to the individual innovators, activists and volunteers who are building this new Ukraine. That is what international audiences currently lack. They have no chance to engage with this inspirational new generation of Ukrainians. Instead, all they see are endless reports about corruption and war.”

Introducing international audiences to the new Ukraine is only part of the challenge, Vedrine says. With populism and anti-establishment sentiment on the rise throughout the developed world, he believes it is also crucial to remind the West of its own comparative virtues. “We don’t need to indulge in Russian-style propaganda in order to win the argument because the fundamentals are all in our favor,” he reasons. “The West certainly has its problems, but it remains by far the most attractive system in the world today. Everyone knows that any Russian or Ukrainian who acquires even a modicum of wealth prefers to live in the Western world. They typically bring their money and their families with them. That speaks for itself.”