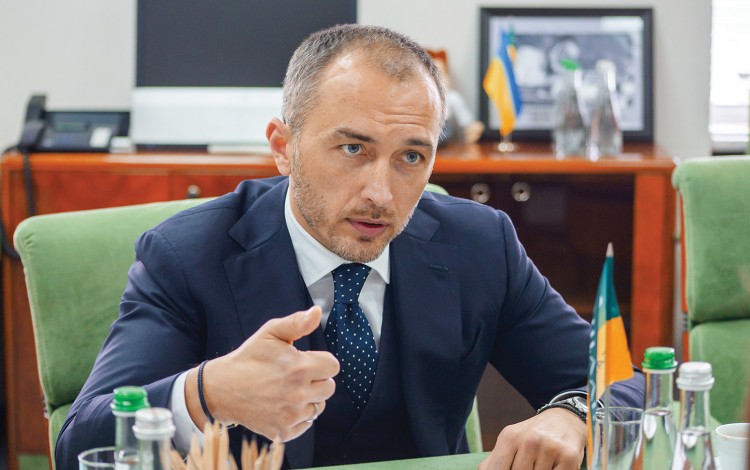 About the interviewee: Andriy Pyshnyy is Chairman of the Management Board of Oschadbank
Business Ukraine magazine

When Ukraine’s banking executives gathered recently in downtown Kyiv for the 2018 edition of the sector’s annual TOP 50 awards ceremony, pride of place went to state-owned Oschadbank, which took the number one position in the most prestigious industry ranking for the third year in a row. Given the bank’s former reputation as a symbol of Soviet-style stagnation, this achievement would be noteworthy in any circumstances. It is all the more remarkable in light of the dynamic changes currently taking place in the Ukrainian banking industry.

No other single sector of the Ukrainian economy has experienced greater upheavals than banking since Ukraine’s 2014 Revolution of Dignity. Amid this fundamental shift in the country’s banking culture, Oschadbank has defied expectations that it would be left behind. On the contrary, the bank has transformed itself in ways that few would have thought possible just five years ago. The unlikely story of Oschadbank’s reinvention offers valuable lessons for the wider Ukrainian reform process, while also serving to counter doubts over the feasibility of overhauling Ukraine’s vast array of inefficient state-owned enterprises.

“When I first announced the goal of becoming Ukraine’s number one bank back in 2014, I am sure that many of my colleagues regarded me as a madman,” says Oschadbank’s Management Board Chairman Andriy Pyshnyy. “At the time, the country was in danger of being consumed by chaos, but I set out this goal in all seriousness. Within eighteen months we had indeed become number one. We have now completed a hat trick of first place finishes, which shows how well our team rose to the challenge.”

According to Mr. Pyshnyy, teamwork was the key reason for the success of the radical changes taking place at Oschadbank since 2014. Appointed to lead the bank in the fateful days of spring 2014 as post-revolutionary Ukraine reeled from the impact of Russian military intervention in Crimea and the east of the country, Pyshnyy’s team immediately recognized the opportunities presented by these historical challenges. “The country as a whole was experiencing cardinal changes and a window of opportunity for transformation and modernization was opening. It was clear that the crisis would push our competitors in the banking sector to modernize and become more efficient. I saw it as our task to take on a leadership role in the process.”

Unlike many state-owned enterprises in the former Soviet sphere, Oschadbank’s progress has not relied on the largesse and relatively bottomless budgetary possibilities provided by state contracts. Mr. Pyshnyy takes particular pride in pointing out that the bank’s most striking post-2014 growth has actually come in the commercial banking sector via what he refers to as internal startups. This startup culture is perhaps best reflected in the bank’s embrace of digital innovation. Prior to 2014, Oschadbank was still very much stuck in the paper and ink era of late twentieth century banking, with just 13,000 online banking clients and a rudimentary range of available internet services. Today, this figure has risen to 2.8 million users, while Oschadbank is recognized as the country’s number two online banking institution. Eye-catching Oschadbank-led innovations include a cashless payment system introduced on the Kyiv metro transport system that was recently recognized as a global leader at the 2018 Google Developers Conference in California. A similar bank card payment scheme is now being rolled out for Lviv trams.

The bank’s new focus on services for small and medium-sized businesses (SMEs) has brought similarly striking results. Launched in 2017, Oschadbank’s SME support program involves cooperation with 52 Ukrainian regional and municipal authorities alongside international partners including the Frankfurt School of Finance and Management and the European Bank of Reconstruction and Development (EBRD). These SME efforts go beyond the provision of banking services to include an element of entrepreneurial evangelism that aims to foster the growth of the country’s middle classes via training and educational initiatives. Oschadbank’s approach seems to be working – the bank entered the top ten for the first time in this year’s national ranking for services to SME clients, immediately occupying the number two position.

Few elements of the Oschadbank overhaul have been as seemingly incongruous as the bank’s entry into the elite world of premium banking. Transforming a brand best known for pension payments into a slick provider of wealth management services was no easy task, but the end product is hard to argue with. The bank entered the premium services sector in spring 2017 and already has over 40 premium banking branches nationwide including Ukraine’s largest dedicated premium banking center in Kyiv’s Vozdvizhenska district. This flagship branch is a million miles away from the bank’s old associations with inertia. It boasts an ultra-contemporary interior design complete with modern art exhibits and its own secure underground parking. The bank’s premium rebranding has proved effective in attracting an impressive number of well-heeled clients. Mr. Pyshnyy quips that if Oschadbank’s flagship premium branch alone was to register itself as a separate bank, it would immediately qualify on the basis of its deposit portfolio as one the top twenty banks in Ukraine.

Earlier this year, Oschadbank finalized the details of a development plan for the coming five years. Approved by the Ukrainian government, Mr. Pyshnyy says this development plan will allow the bank to transition from the modernization phase towards consolidation of its leadership positions across the Ukrainian banking industry. “Our modernization efforts over the past three years have demonstrated the bank’s ability to develop in new directions and to deliver on our growth targets. The goal now is to become number one in all areas. This may not sound like a very modest objective, but recent experience suggests it is entirely realistic.” Plans include doubling the bank’s SME loans portfolio to UAH 5 billion, expanding into new service sectors, and significantly increasing the Oschadbank share in retail banking segments like mortgages and the car loans market.

The key strategic goal on the horizon is the planned sale of a 20% stake in the bank to an international financial institution by 2020, which is a key element of the November 2016 memorandum establishing a framework for Oschadbank’s current strategic cooperation with the EBRD. “As we approach this target, the bank’s financial results coupled with the prospects of the market and the broader Ukrainian economy will all be taken into account to help determine the details of the deal,” says Mr. Pyshnyy. “The end of 2020 is already quite close so we should not lose any time in moving forward with preparations.”

Mr. Pyshnyy anticipates that the proposed partial privatization would mean significant further changes to the corporate culture within the bank, including everything from business practices to credit policy. However, he is unfazed by this process and points to the successful existing cooperation with the EBRD as an indication of the adaptability his bank can call upon. Nor does he share the unease of many analysts over the Ukrainian state’s unusually large stake in the country’s banking sector, which currently stands at over 55% of total banking assets. “I agree that it might appear to be a cause for concern, but I think it is also important to take a closer look at the specifics of the banks involved. There are four state-owned banks that are currently engaged in some form of partnership with international financial institutions. This sets certain standards and creates a basis for greater competitiveness and commercialization. State preferences have also been limited or cancelled, so everyone is now able to compete. Thanks to a combination of international partners, the efforts of the industry regulator, and the internal procedures of the banks themselves, I don’t see any risk of the state directly controlling the banking system. Everyone understands that when it comes to banks like PrivatBank, privatization should be the ultimate objective once the economic environment is suitable, but I don’t regard the current situation as posing any immediate threat to market competition.”

The move towards partial privatization will represent another stage in Oschadbank’s evolving corporate identity, but it is in many ways a relatively minor departure compared to the huge leaps of the post-2014 period. The new team’s experience over the past four years offers important insights into the process of transforming a classically unwieldy and cumbersome state-owned colossus where habits and mentalities dating back to the Soviet era had often become deeply engrained. “Attitudes did not change overnight,” Mr. Pyshnyy reflects. “Communicating the new philosophy of the bank was probably one of the hardest tasks we faced. Many of our employees had been with the bank for twenty years or longer. They had developed a passive approach to their professional lives and had grown used to the idea that nothing much would happen for the foreseeable future. We had to put across the message that things had changed in fundamental ways.”

Mr. Pyshnyy thinks that regional visits were particularly effective communications tools allowing the new team to engage directly with local representatives of the bank. In his first two years as Chairman of the Management Board, he visited three-quarters of regional branches, including some that had not seen a CEO of the bank since the latter years of the Stalin era. These meetings allowed a direct dialogue to take place and gave regional teams a feeling for the new institutional direction the bank was taking. “Sometimes we would talk for one and a half hours or longer as I explained our vision for the bank, then we would discuss everything from strategy to implementation in detail,” he recalls.

What advice would Mr. Pyshnyy offer to any colleagues who find themselves tasked with transforming one of Ukraine’s many inefficient state-owned enterprises? “It is not something that is easily summed up in a few sentences, but there are a few key lessons I would share. One of the most important things to realize is that you will have to deal with the existing workforce. You cannot replace everybody at once, so you must make maximum use of the available staff. For us at Oschadbank, this led to the somewhat paradoxical situation where the hardest stages in the modernization process in 2014 and 2015 were actually carried out by people who had no experience of such things and in most cases probably did not even believe that change was possible. This requires communicating your objectives in a clear and concise manner while making sure to involve people as much as possible. It also means winning the trust of your employees. This leads me to one more obvious but important piece of advice – make sure you avoid stealing.”

Another key point might be to avoid burnout. Four years after setting out on their Oschadbank odyssey, the new Oschadbank team remains highly energized by the challenges they face and are showing no signs of slowing down just yet. “We set ourselves the task of becoming the evidence that Ukraine is changing. That was the kind of time it was in 2014, and that remains the goal,” Mr. Pyshnyy offers. “Who wants to become trapped in a mundane working routine? It is far more interesting participate in a bigger story. We want to be able to look back and feel that this was our story too."