The threat of a Kremlin revival hung over Ukraine’s 2019 election cycle but ultimately failed to materialize. After five years of Putin’s war, has Russia disenfranchised itself from Ukrainian democracy? 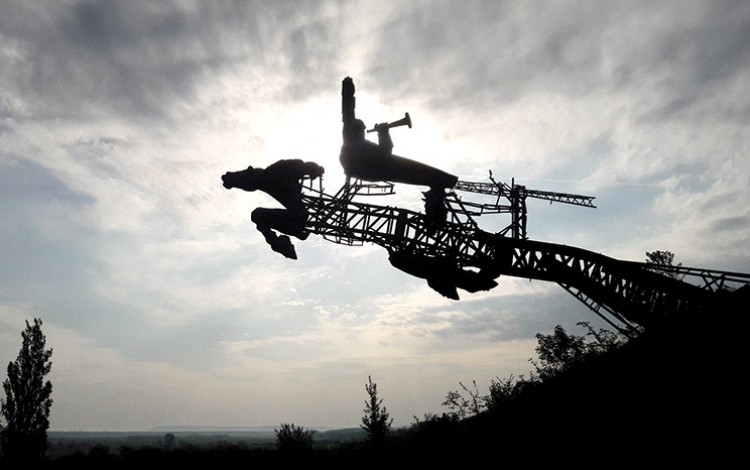 A semi-dismantled Soviet-era monument to Red Army cavalry in western Ukraine. Many Ukrainians believe a revival in Russian imperial influence is still possible despite the ongoing undeclared war between the two countries
Business Ukraine magazine

The specter of Russian revenge was in the air throughout Ukraine’s 2019 presidential and parliamentary election campaigns. For the first six months of the year, presidential candidates, political parties and analysts all repeatedly raised the alarm over the allegedly looming threat posed by Moscow.

According to these doom-laden forecasts, Ukraine was about to be reconquered by the Kremlin via the ballot box, with a combination of war-weariness and disillusionment undoing the historic progress achieved during five years of blood, sweat, toil and tears.

These predictions of a decisive electoral swing in favor of Moscow ultimately proved well wide of the mark. Instead, Ukrainian voters handed political newcomer Volodymyr Zelenskyy and his Servant of the People party an unprecedented mandate for change. Zelenskyy’s commitment to continuing Euro-Atlantic integration did not prevent him from taking first place throughout much of Russia’s former electoral heartlands in southern and eastern Ukraine.

Meanwhile, Ukraine’s remaining pro-Kremlin parties never looked like competing at the national level as they once did. Despite the promise of peace in the east and cheap gas for all, Moscow-aligned parties and presidential candidates struggled to reach double figures. In both elections, they ended up with results that were little better than the outcomes of Ukraine’s previous presidential and parliamentary polls, which took place at the height of the war in 2014.

Does this mean Russia is finished as an electoral force in Ukrainian politics? Business Ukraine magazine spoke to University of Calfornia Professor Paul D’Anieri about the results of the recent election cycle and asked him whether the idea of a future Russian revival in Ukraine is still plausible.

Openly pro-Russian candidates and parties collectively garnered just 15-20% of votes in this year’s Ukrainian presidential and parliamentary elections. This is well short of the national majorities pro-Russian political forces were able to secure in Ukraine as recently as 2010 and 2012, but still indicates significant levels of support among Ukrainian voters. From the Kremlin’s point of view, is the cup half-full or half-empty at this point?

For the Kremlin, these elections confirm the bad news from 2014: namely that there is no longer the electoral basis for a pro-Russian candidate to win the Ukrainian presidency or for a pro-Russian party to control the Ukrainian parliament. Many of the voters who voted for pro-Russian parties and candidates prior to 2014 were located in Crimea and parts of the Donbas that are now under occupation, and those people could not vote in the recent election cycle. This year’s twin votes have underlined how the ongoing occupation of Crimea and the Donbas has dramatically undermined the electoral position of pro-Russian forces in Ukraine. To cite just one figure, there was no voting in, and will be no representatives from, 26 districts in occupied Donbas and Crimea. That alone represents about six percent of the overall Ukrainian parliament. Almost all of those seats would have gone to pro-Russian candidates. Instead, the pro-Kremlin Opposition Platform-For Life (OP-FL) won only six single mandate seats, as opposed to the 113 won by the Party of Regions in 2012. This means that the cup is at least half-empty for Russia.

The consolation prize is that because Zelenskyy was so dominant and other parties also collapsed, OP-FL claimed second place overall in the July parliamentary vote. This is perhaps a moral victory. Substantively, being the main opposition party will entitle this group to some leadership positions and additional authority in parliament. And the fact that this group is now run by Viktor Medvedchuk, who is not only close to Putin but one of Ukraine’s enduring political forces, is an additional source of consolation. The key question is whether Medvedchuk and others will be able to use various methods (bribery being the most obvious) to peel votes away from the majority.

For Putin personally, this year’s elections represent a particular risk. Whatever else Zelenskyy turns out to be, his youth, energy, anti-corruption stance and wide popularity provide Russian voters with an example of the kind of leader that can emerge in free elections. This must be a cause for concern for Putin, who is always worried that Ukraine will provide a bad example for Russians.

Volodymyr Zelenskyy’s geopolitical stance differs little in substance from that of his predecessor, Petro Poroshenko. Like Poroshenko, he advocates continued Euro-Atlantic integration while unambiguously identifying Russia as an aggressor. Nevertheless, Zelenskyy has achieved an historic breakthrough among traditionally pro-Russian voters in southern and eastern Ukraine. What does Zelenskyy’s success tell us about the mood in these regions?

Voting behavior in southern and eastern Ukraine is shifting, and we do not fully understand yet where it is heading. While regional differences remain visible in voting patterns, Zelenskyy has bridged them better than any previous candidate in Ukrainian history. Whether that turns out to be an anomaly or a trend remains to be seen. Clearly, voters in southern and eastern Ukraine share the same broad desire for change and hunger for new faces as demonstrated by voters elsewhere in the country. Similarly, Zelenskyy’s skill as a campaigner has been as effective there as it was elsewhere.

It is also clear that Russia’s war in the east has undermined the position of overtly pro-Russian parties. The permissive condition for Zelenskyy’s success in the east and south is the collapse of the Party of Regions, which once had a tight grip on voting in these regions. An important question for the future is whether some party or oligarchic group can forge the kind of dominant political machine in the east that the Party of Regions once represented. For now, it does not look likely.

Polling data suggests that the pro-Kremlin Opposition Platform-For Life party is heavily dependent on pension-age voters. While it is common to associate the decline in support for Ukraine’s pro-Russian parties with the ongoing undeclared war between the two countries, is the Kremlin’s Ukrainian electorate also in danger of losing further ground due to natural generational shifts in voter sympathies?

The short answer is yes. The average age of the new members of parliament is 41. Such an individual would have been born in 1978 and thus have been 13 when the Soviet Union collapsed. For an increasing share of Ukrainians, the time when Ukraine and Russia were part of the same state is history, and not necessarily good history. People who identify with the Soviet Union rather than with Russia or Ukraine are naturally going to decrease in numbers. Unless something dramatic changes, the constituency for closer ties with Russia will naturally shrink, and the war in the east is probably accelerating that process.

As you have already noted, the occupation of Crimea and parts of the Donbas region has de facto disenfranchised millions of traditionally pro-Kremlin Ukrainian voters. While the return of Crimea to Ukrainian control does not appear likely in the short- to medium-term, the reintegration of Donetsk and Luhansk looks far more realistic. What could the return of this Donbas electorate mean for the Kremlin’s ability to influence Ukrainian politics?

Paradoxically, the price Russia paid for occupying Crimea and Donbas has been to shrink the number of pro-Russian voters in Ukraine dramatically. In terms of pro-Russian votes, the loss of the Donbas from the Ukrainian electoral map has had a much bigger impact than Crimea, simply because of its much larger population. Over 2.5 million votes were cast in 2010 in parts of the Donbas that are now occupied, compared to less than a million in Crimea. Therefore, one might estimate that reintegrating the occupied Donbas (without Crimea) would add roughly 10-12 percent to the vote for pro-Russian forces. In such a scenario, pro-Russian parties could again be key to forming a coalition in parliament, and a pro-Russian candidate might still be able to challenge for the presidency.

The 2019 election campaigns of Ukraine’s pro-Kremlin parties focused on pragmatic issues such as promises of peace and cheaper gas, while at the same time steering clear of loftier appeals to Slavonic brotherhood. Is the old talk of Ukraine and Russia as “fraternal nations” gone for good?

We still hear a great deal of talk about Russo-Ukrainian fraternity from prominent Russians. I believe that this talk was toned down during Ukraine’s recent election campaigns because it was not seen as an effective vote-winner. While the rhetoric of fraternity is divisive even in eastern and southern Ukraine, populist promises tend to go down well with most voters. Polling showed that corruption, economics, and the war were voters’ biggest concerns, so that is what the pro-Russian parties focused on.

What do the diminishing electoral prospects of pro-Russian Ukrainian political parties mean for the Kremlin’s geopolitical ambitions in Ukraine?

The good news for Ukraine is that Russia will have less and less direct influence on the country through votes and elections. The bad news is that they will seek to exert their influence through other methods. The current Russian strategy seems to be to give Ukraine a choice between re-integrating the occupied territories on terms that favor Russian influence or enduring a long-term conflict that drains Ukrainian resources. Either way, Ukraine loses. If Russia has further territorial ambitions in Ukraine, meddling in Ukrainian politics is no longer a viable strategy. Instead, outright invasion now seems to be the only viable option. That is either good news or very bad news.

About the interviewee: Paul D’Anieri is Professor of Political Science and Public Policy at the University of California, Riverside. His book “Ukraine and Russia: From Civilized Divorce to Uncivil War, analyzing the long-term sources of the Russian war in Ukraine” will be published by Cambridge in early 2020