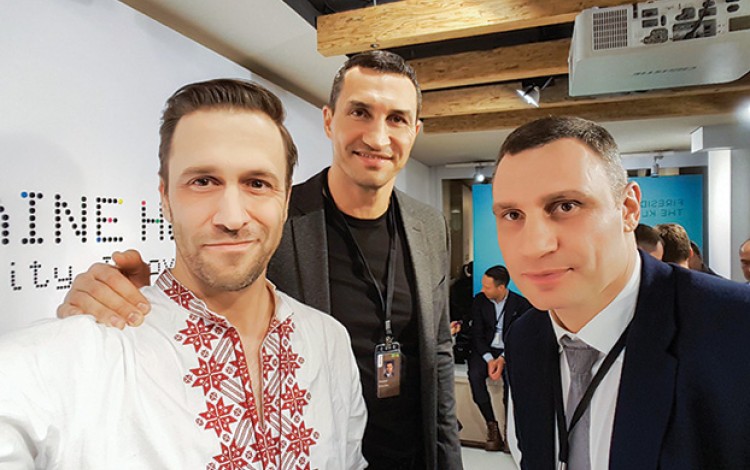 In good company: Luc Chenier pictured at the 2018 World Economic Forum in Davos where he joined the Klitschko brothers at Ukraine House to launch the CR8UA Creative Video Project to help promote Ukrainian creativity to global audiences
Business Ukraine magazine

You could say that Luc Chenier is a minority within a minority. Unlike most of his fellow Canadians in Ukraine, Chenier does not hail from the country’s 1.3 million-strong Ukrainian diaspora. In fact, he is a French-Canadian who had no prior connection to Ukraine when he first arrived in the country as an advertising industry executive in the summer of 2000. This lack of any ancestral ties has not prevented Chenier from falling in love with Ukraine – or from making a major contribution to the rebranding of the country on the international stage.

As he sits down with Business Ukraine magazine on a sunny June afternoon at one of central Kyiv’s heaving summer terraces, the always dapper Canadian communications expert is grumbling about the bureaucratic challenges and other random absurdities of working with Ukrainian government ministries. However, it soon becomes clear that he would not have it any other way. “I feel so lucky to live in Kyiv,” he reflects. “If you have the balls, the strength, and the smarts, you can be anything you want to be in this city. I am very much aware of the fact that I would not necessarily have so much freedom elsewhere to do what I want to do. This market will support you if you are tough and credible.”

Right now, this means developing his own boutique communications consultancy named “Plan C”. With typical pop culture panache, Chenier likens his role to that of the iconic Mr. Wolf character played by Harvey Keitel in Quentin Tarantino’s 1990s cult classic “Pulp Fiction”. “I’m the person you call when you need to bring your communications strategy up to an international level in a hurry. Why wait for plan A and plan B to fail when you can go straight to Plan C?” he quips. Chenier’s client list already includes the Canadian and Ukrainian governments along with private sector big hitters like Horizon Capital, Western NIS Enterprise Fund and a number of VIP personal accounts both in Ukraine and the United States that he remains tight-lipped over.

Much of Chenier’s most prominent work has focused on international campaigns designed to raise Ukraine’s profile and rebrand the country in the wake of the 2014 Revolution of Dignity. Ever since gaining independence in 1991, Ukraine has suffered from a lack of international brand recognition made worse by negative associations with specific disasters like Chornobyl and lingering misconceptions of the country as a component part of Russia. Until 2014, successive Ukrainian governments largely ignored these branding problems. However, as Russian hybrid forces fanned out across Crimea and eastern Ukraine accompanied by a barrage of disinformation, it became painfully obvious that international ignorance about the realities of modern Ukraine had made the country uniquely vulnerable to Russian information warfare.

The Ukrainian government has responded to this rude awakening by embarking on the country’s first credible brand-building efforts since the fall of the Soviet Union, and Chenier has been involved in the process from the very beginning. He is currently working with the Ministry of Agriculture on a campaign to promote Ukraine’s potentially world-beating organic foodstuffs. Prior to this, he was the driving force behind a series of promotional videos collectively entitled “Ukraine – Open for U” which aimed to highlight Ukraine’s ample charms in areas as diverse as the tourism, infrastructure and agriculture sectors. Such efforts are relatively standard fare in the world of international country brand promotion, but the initiative represented a quantum leap for post-Soviet Ukraine.

The response to the “Ukraine – Open for U” campaign was overwhelmingly positive. International audiences welcomed new perspectives on the country that went beyond the usual media stereotypes, while many in Ukraine itself cheered depictions of the country that felt far closer to their own experience than the war-torn and dysfunctional scarecrow more commonly seen in the international headlines. “A lot of people have been surprised to learn that so much of Ukraine’s key messaging was actually done by a foreigner like me,” says Chenier. “It means a lot to me personally when I hear people say, “He really gets us. He understands our mentality.” At the end of the day, if these campaigns have enjoyed any success at all, I think it is down to the fact that I tried to blend my Western skillset and understanding of international expectations with my instinctive sense of Ukraine’s core values. That’s only really possible if you immerse yourself in a culture for an extended period as I have done in Ukraine.”

Chenier’s Ukrainian Odyssey is now in its eighteenth year, albeit with stints in Moscow and back in Canada sandwiched somewhere in the middle. Having first arrived in the country to take up a role as creative director at what was then one of Ukraine’s top advertising agencies, he has since enjoyed a range of career developments. The French Canadian’s most public role was as CEO of the English-language newspaper The Kyiv Post, a position he held for just over a year and a half starting in summer 2016. His position at the helm of Ukraine’s venerable English-language newspaper of record allowed Chenier to boost his profile further while pioneering a number of initiatives including video content and event hosting. His videos during the 2017 Eurovision Song Contest in Kyiv proved particularly popular and helped encourage him to take up vlogging (“video blogging”) more seriously as an additional dimension to his communications work, with Leopolis Jazz Festival among his first clients. However, despite enjoying success in the advertising and publishing worlds, Chenier has concluded that he is most comfortable acting as his own boss in an entrepreneurial role. “When all is said and done, I’m here to build my own dream. While I am very grateful for the opportunity I had with the Kyiv Post, I currently feel like I am going back to my roots and doing what suits me best.”

Chenier says he is now looking forward to supporting Ukraine’s further efforts to develop a more coherent and attractive international brand. As far as the Canadian is concerned, this is anything but an afterthought in Ukraine’s post-Maidan journey. On the contrary, he believes a lack of communication skills remains one of the major barriers preventing the country from achieving its goals of Euro-Atlantic integration and greater economic prosperity. “Ukraine has incredible amounts of potential but there is a world of difference between potential and the kind of concrete benefits you can expect to come from greater clarity. Once Ukraine learns how to communicate effectively with the outside world, the difference will be stunning.” He hopes to witness this process from the inside and plans to continue working in Kyiv for many years to come. Chenier says the lifestyle on offer in the Ukrainian capital can compete with the best the Western world has to offer, but also emphasizes his emotional engagement to a country that has given him some life-changing opportunities. “I’ve been able to do things in Ukraine that are beyond my wildest dreams. It really is a blessing. How can I not continue to invest in Ukraine when Ukraine has invested so much in me?”