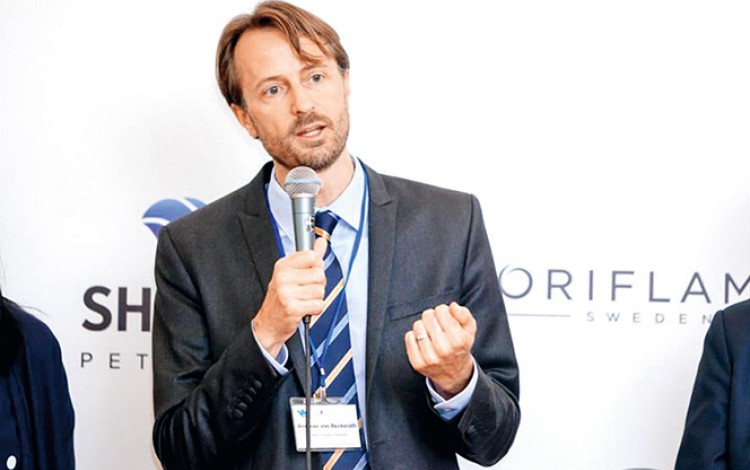 Sweden has a large business presence in Ukraine. In light of the current challenges in Ukraine, what has been the embassy’s message to Swedish companies active in Ukraine and to those looking to enter the Ukrainian market?

I am generally a great optimist when it comes to Ukraine’s future, and I try to share this optimism with Swedish companies. One of the reasons for this optimism is what I regard as Ukraine’s positive fundamentals. Ukraine is rich in natural resources and has a very well educated workforce with a wide range of professional skills – particularly among the younger generation. Ukraine is a market where you can recruit staff for competitive salaries. The geographical location of Ukraine is another advantage. I sometimes have to remind Swedes who haven’t been here that it is only a two-hour flight from Stockholm to Kyiv, which is actually less than the distance to Brussels. Ukraine offers proximity to EU markets including Sweden.

Beyond these fundamentals, there are a number of present factors in Ukraine’s favour, despite the ongoing Russian aggression. I think the signing of the EU-Ukraine Association Agreement will be incredibly important for the development of the Ukrainian economy. Ukraine also currently enjoys strong political and economic support from the EU, from the world community, and from Sweden. I would argue that Ukraine today has the most reform-oriented government it has ever had, which is working in combination with a world-class civil society to actively push the reform agenda.

I try to be honest and frank with Swedish companies when it comes to the huge challenges Ukraine is facing, not least in terms of the rule of law and the fight against corruption, but I also aim to present an optimist perspective of the country’s potential. Many Swedish investors are actually already well aware of Ukraine’s potential. The key question they have now is how quickly the reform process will be able to unlock this potential.

What contributions is Sweden making towards Ukraine’s EU integration process?

Next to strengthening bilateral relations between Sweden and Ukraine, my single most important task is to help Ukraine integrate into the EU. It is up to the Ukrainian people to decide how close to the EU they want to be; what we try to do is enable Ukraine to follow its chosen path. The speed of this EU integration process depends on the progress of the reform agenda. Every year, we invest an average of EUR 25 million in projects designed to enable Ukraine to reform itself and move closer to the European Union. These projects include technical support, grants and credits, investments into Ukraine’s dynamic civil society, and support for energy efficiency. This highlights the fact that we are not only ready to provide political support, but also practical help to speed up Ukraine’s EU integration. On top of this, I’m very proud of the fact that Sweden is one of the staunchest supporters of Ukraine’s EU integration within the European Union itself. We constantly argue that the EU should have an ambitious and generous policy when it comes to strengthening ties with Ukraine.

How do you expect full implementation of the EU-Ukraine association agreement to impact on bilateral ties and trade relations between Sweden and Ukraine?

I am optimistic that the Association Agreement will serve as both an anchor for reforms and a roadmap for the reform process. Ukrainian companies will also benefit from access to the EU market, which is the biggest consumer market in the world. For Swedish companies, the signing of the Association Agreement is an important signal as it demonstrates that Ukraine is open for business.

Which sectors of the Ukrainian economy do you regard as the most attractive for Swedish investors?

There are many interesting sectors but I would highlight three: IT, agriculture and ‘clean-tech’. Big Swedish companies like Ericsson and Sigma Software already have a major presence in the Ukrainian IT sector, and alongside them are smaller, startup companies like Beetroot, which was established in 2012 by two young Swedish entrepreneurs and now employs about 60 Ukrainians. My dream as ambassador is to see more of these small and medium-sized Swedish companies exploring Ukraine’s potential. I think SMEs could serve as an engine for Ukraine’s economic growth, which is exactly what we have seen in Sweden.

Everyone is also talking about Ukraine’s agriculture sector, which stands to be one of the chief beneficiaries of the free trade component within the Association Agreement. The third sector of particular interest for Swedish companies is ‘clean-tech’, which covers energy efficiency, waste management, renewable energy and other green technologies. Ukraine has enormous needs in this area, while Sweden is a recognized world leader.

As the ambassador of a major investor country, which aspects of the Ukrainian reform process do you regard as most crucial in order to attract greater international investment?

If I had to single out one sector, it would be strengthening the rule of law and the battle against corruption. I believe that the government has done more in terms of reform than it usually gets credit for, but nevertheless it has not done enough, and the process has not been fast enough. Another important challenge for the government is to communicate what they have already achieved in terms of reforms. Many important reforms will not have an immediate impact on the living standards of ordinary Ukrainians, which also makes the task of the government harder. It may take a few years before the general population becomes aware of the positive results of many reforms, which is why reforms in high visibility areas like the fight against corruption are particularly important.

You were one of the most prominent international representatives at the recent Kyiv Pride parade in support of sexual minorities. How important is social reform in the context of Ukraine’s broader European integration efforts?

For Sweden, respect for human rights is always a key principle, and we believe the rights of sexual minorities are an inseparable part of this human rights agenda. We are convinced that it is impossible to commit to human rights in an ‘a la carte’ manner. Human rights have to apply to everyone, including sexual minorities. I personally believe that having the right and the freedom to love is one of the most fundamental human rights, which is why my wife and I decided to join this year’s parade.

In my experience, Ukraine is a very tolerant country. If you look at Sweden in particular and Western Europe as a whole, there has been huge progress with regard to the rights of sexual minorities over the past 40 years. I think this process will also take place in Ukraine.

Swedish Vikings are seen as the founders of the Kyiv Rus state. How conscious of this historic contribution are modern Swedes?

Swedes in general are aware of the common history we share with countries like Ukraine, but the contemporary focus is much more on building a common future together. When Swedes follow Ukraine in the news today, it is generally in the context of Russian aggression. For Swedish people, the right of every country to determine its own future is a core notion.

Representatives of Sweden in Ukraine must often find themselves reminded of the Battle of Poltava. How would you characterize contemporary Ukrainian attitudes towards this prominent Swedish role in Ukrainian history?

For many Europeans, Ukraine remains a relatively unknown country. How has awareness of Ukraine evolved among your Swedish colleagues since your arrival in the country two years ago?

The events of the past eighteen months have received extensive coverage in the Swedish media, while there is considerable Swedish solidarity with Ukraine and support for the country’s right to determine its future path. I was recently in Sweden for a major annual conference and it was striking to note how much interest there currently is in Ukraine. In order to improve awareness of Ukraine I try to bring as many of my Swedish compatriots as possible to Kyiv, including both business people and politicians. Without exception, these first-time visitors from Sweden are always extremely impressed by what they encounter, and leave the country feeling much more optimistic about Ukraine’s future.