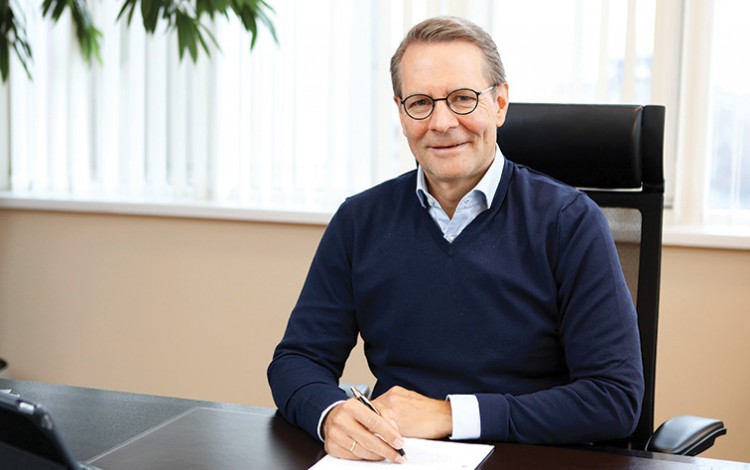 About the interviewee: Ansgar Bornemann is Nestlé managing director for Ukraine and Moldova
Business Ukraine magazine

Swiss consumer goods giant Nestlé has been present in Ukraine since the early 1990s and has expanded over the past two decades to become one of the largest multinationals operating in the country. After initially focusing on imports, the company soon branched out into local production and currently has three major production facilities in Ukraine (Lviv confectionary factory Svitoch, Torchyn ketchup, sauces and mayonnaise production plant, and Kharkiv-based noodles producer Mivina). Ukraine is also home to the largest Nestlé Service Center in the world which is located in Lviv and employs over 1200 staff – around one-fifth of the total number of Nestle employees in Ukraine.

As well as producing for the Ukrainian domestic market, Nestlé also exports a significant portion of its Ukrainian production to EU and global markets. Meanwhile, the company sources the bulk of ingredients locally, enabling Ukrainian partners to gain official supplier status and tap into the Swiss multinational’s extensive global production networks. Recent figures reflect Nestlé’s significant Ukrainian footprint. Over the past ten years, the company’s Ukraine investments have totaled around CHF 300 million, while annual revenues in 2017 were approximately UAH 7 billion.

This expanding investment profile has helped to make Nestlé a positive example of foreign direct investment (FDI) in Ukraine and proof that it is entirely possible to prosper in the contemporary Ukrainian business environment. “In my opinion, Nestlé in Ukraine is a tremendous investment success story,” says Nestlé managing director for Ukraine and Moldova Ansgar Bornemann, who has been with the company for fifteen years and took up his current Kyiv position in 2015.

Despite this upbeat overall appraisal of Nestlé’s Ukraine experience, Bornemann is frank about what he sees as the need for further reform of the Ukrainian business sector. The German executive acknowledges the unprecedented reform progress made by the Ukrainian authorities since the 2014 Revolution of Dignity, but also expresses undisguised disappointment over the slow pace of anti-corruption efforts and notes the damage this does to outside perceptions of the country’s investment attractiveness.

Bornemann says he fell in love with Kyiv as soon as he arrived in the city, and he speaks on Ukrainian issues with obvious engagement. Nevertheless, he readily admits that the concern he expresses for Ukraine’s post-Maidan transformation is far from purely altruistic. “Colleagues sometimes ask me why I speak out on the need to combat corruption and promote the rule of law. As a food producer, they wonder what is in it for me,” he says. “The simple fact is that Ukraine needs to attract much more FDI. This is the only way to generate the kind of GDP growth that would lead to real prosperity for ordinary Ukrainians. Unless we see genuine progress in combating corruption, FDI will remain significantly lower than it should be or could be. This keeps GDP growth down and reduces purchasing power, which makes it harder for Nestlé to expand in Ukraine. So we actually have a very direct interest in the future of the reform process.”

While Nestlé has much to gain from the growing prosperity of Ukrainian domestic audiences, the company’s focuses in Ukraine include the production of food products for export. Between 20% and 30% of all Nestlé production in Ukraine is bound for export to international markets, with most items ending up in the EU due to the logistical convenience of Ukraine’s nearby location. The scale of Nestlé’s export activities in Ukraine is testament to the high quality standards the company has been able to achieve at its Ukrainian production facilities. The company has even won the right to produce premium Nestlé items for EU markets that are not yet on sale in Ukraine, underlining the progress made in establishing a strong reputation for the highest international standards.

Quality is only one of the many competitive advantages Ukraine currently enjoys as a production base for export to EU markets. Bornemann emphasizes the appeal of Ukraine’s landmark EU Association Agreement with its free trade component, citing favorable tax and customs conditions in particular. He also points to the combination of highly qualified and cost-competitive personnel as one of the key factors that makes Ukraine attractive as a production base. “Once we had introduced our global Nestlé corporate standards at the Ukrainian facilities we acquired, we found that quality levels and production costs made them highly competitive. This opened up major opportunities for us to export to other European markets and beyond.”

Then there is the entire issue of ingredients. Given Ukraine’s reputation as the breadbasket of Europe, it comes as no surprise to learn that Nestlé currently sources around 70% of all the ingredients used in Ukraine locally. This is well above the global average for the company. An unusually high proportion of local supply means a considerable additional boost for the Ukrainian economy. It also provides attractive opportunities for individual local partners, who not only benefit from Nestlé’s custom but also earn the right to a place on the company’s global list of approved suppliers, thus creating the possibility of supplying Nestlé producers around the world.

Making the cut is no simple task. Before they receive the seal of approval, all potential suppliers must go through an audit in order to demonstrate that they meet Nestlé’s corporate expectations, which are globally standardized and often more stringent than locally applicable legislation. In addition to quality controls on the ingredients themselves, suppliers must also meet ethical standards on issues such as the use of child labor and care for the environment. Regular subsequent audit checks guarantee that companies maintain these standards, making it a significant ongoing commitment for interested parties.

Nestlé’s local sourcing and Ukrainian production are part of the company’s long-term strategy and Creating Shared Value approach in Ukraine, and Bornemann says he sees reason to be optimistic about the direction the country is moving in. He points to the growing economy and highlights currently modest Ukrainian per capita consumption levels that are still significantly lower than in other countries located in Ukraine’s neighborhood. “Given Ukraine’s size and population, the growth potential of the domestic market for food manufacturers is clear,” he states. “As we see further development and more wealth creation, standards of living will rise and consumer habits will move in broadly the same direction as what we have already seen in Central Europe.”

Talk of rising living standards inevitably brings us back to the subject of improving the Ukrainian investment climate. As well as addressing corruption and rule of law issues at home, Bornemann would like to see Ukrainians doing more to promote the country on the international stage. He argues that potential investors receive an often one-sided and negative impression of the country due to international media coverage that tends to focus exclusively on major news stories dealing with conflict and corruption. The German executive regards himself as an unofficial ambassador for Ukraine and says he would like to see others within the Ukrainian business community adopting similar attitudes. Ultimately, he says, the Ukrainian authorities need to acknowledge that they must compete for the attention of investors against a host of rival nations throughout the Central and Eastern Europe region who are equally eager to attract investment and often enjoy significant head starts in terms of business-friendly reforms. Nestlé’s experience shows that Ukraine can be competitive, but the country needs to be much more proactive in promoting itself. “It is time to recognize that international investors have choices,” he observes.

While keeping an eye on the progress of Ukraine’s post-Maidan reforms and watching out for any improvements in the investment climate, Bornemann is also keenly observing the changes taking place in Ukrainian society as a whole. He identifies the rise of the millennial generation as particularly encouraging and sees their markedly more globalized tastes for products such as breakfast cereals as a promising sign for food producers like Nestlé. “We are currently witnessing a generational shift in Ukraine,” he says. “This is why I firmly believe that visa-free travel is so fantastic for Ukrainians. As they travel more and experience different cultures, their tastes will evolve to include things like new Italian spaghetti dishes and other delicacies they encounter elsewhere. Local favorites will remain part of the menu, just as they do all over the world. I am sure Ukrainians will be enjoying borsch and shashlyk for many decades to come, but other foods will also appear. This gives companies like Nestlé a wonderful opportunity to be part of this process.”

The scale of Nestlé’s investments in Ukraine is perhaps the strongest possible testament to the company’s faith in the future of the country. Recent investment into the development of production facilities in Kharkiv speaks volumes for the long-term commitment the Swiss multinational has made to the Ukrainian market. The expectation is that Ukraine will remain a highly competitive production base for international export while also boasting an increasingly attractive domestic market.