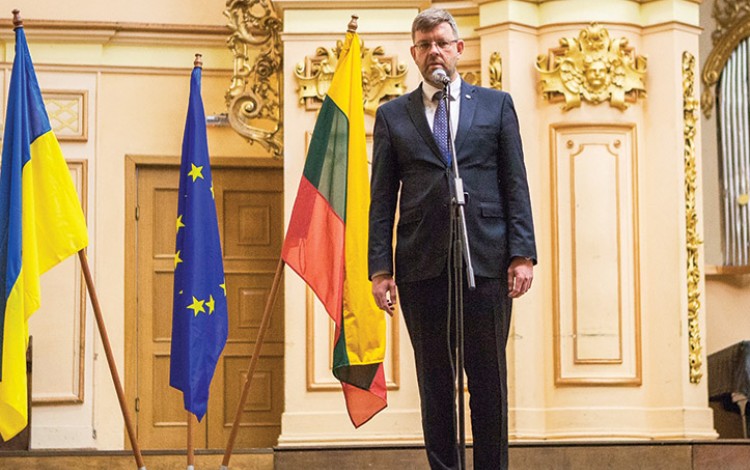 About the interviewee: Marius Janukonis is the Lithuanian Ambassador to Ukraine
Business Ukraine magazine

Lithuania recently celebrated fifteen years as an EU member state. What can Ukraine learn from Lithuania’s EU integration experience, both prior to ascension in 2004 and since?

The past fifteen years of EU membership have significantly changed Lithuania. Along with economic stability, growing foreign and domestic investment, and the development of Lithuania’s national infrastructure, EU membership has also strengthened the self-confidence of Lithuanians. I think we can be quite sure in saying that it has led to the irreversible embrace of European values and embedded Lithuania within a wider integrated Europe. Today, Lithuanians rank among the biggest euro-optimists within the European Union. Overall support for EU membership in Lithuania is currently at 68 percent, while 88 percent of the Lithuanian population believes EU membership has been beneficial for the country.

There are several lessons from Lithuania’s experience that could potentially be useful for Ukraine. Perhaps the most important factor underpinning Lithuania’s integration was the stable and unanimous political consensus since the 1990s regarding future EU membership among all of the country’s major parliamentary political parties. Lithuania’s experience may also provide Ukraine with a clearer understanding that EU standards, legislation and reforms are beneficial for the development of the country itself, rather than merely being something required by Brussels. Another important lesson we learned both before and after EU accession is that negotiating with EU institutions on almost every issue is possible in order to defend national interests. I would advise our Ukrainian partners to be as active as possible in the corridors of Brussels in order to better understand how the EU works, while also networking and negotiating to find out what solutions might suit Ukraine best.

Since 2014, Lithuania has been one of the most vocal supporters of Ukraine in its struggle against Russian aggression. How challenging is it to maintain EU unity on this issue among fellow EU member states that are not on the frontlines and have no historical experience of Russian imperialism?

Ukraine is an extremely important country for the European Union. It is the EU’s eastern neighbor, and at the same time, it is geographically and historically a long-term partner of Lithuania. The uniqueness of this partnership lies in the fact that we share a common history stretching back to the fourteenth century, and yet have never had any bilateral issues that could overshadow our relations. There is a deep understanding in my country that the security and stability of Ukraine is vital for Lithuania and for Europe as a whole. Based on this understanding, Lithuania has been among the most vocal supporters of Ukrainian sovereignty and territorial integrity since the start of Russian aggression in 2014. Alongside political support, there is also a strong sense of solidarity towards Ukraine throughout Lithuanian society.

The EU is a unique bloc of 28 countries with a range of different interests and different views on international issues. Finding consensus on these issues can sometimes be a challenge. However, over the years, the EU has elaborated a decision-making mechanism on foreign policy issues that takes into account all positions, especially when it comes to fundamental values and human rights. Russia’s brutal violation of international law and use of military force to illegally annex Crimea and start the ongoing conflict in eastern Ukraine have produced a united response, with all EU countries condemning these unlawful acts and introducing sanctions against Russia, which are prolonged every 6 months.

We should acknowledge that some of the member states and their representatives express various points of view regarding the future of these sanctions, but the EU as a whole has been able to maintain its firm position so far. This stance demonstrates the strength of the European Union and its commitment to the fundamental values and principles of international law.

Both geographically and culturally, Lithuania is in many ways the closest EU member state to Ukraine. What business opportunities does this create for Ukrainian companies and investors?

Lithuanian businesses have always shown considerable interest in the potential of the Ukrainian market, including both trade and investment opportunities. The last decade has also seen growing interest from Ukrainian companies looking to enter the Lithuanian market. More and more Ukrainians are discovering Lithuania as a stable country with a business-friendly environment and well-developed infrastructure that is an integral part of the 500 million EU market. This increasingly attracts Ukrainians who looking to export to the EU or to set up production facilities within the EU. Current and planned investments from Ukraine include food processing, chemical and pharmaceutical production facilities in various regions of Lithuania. A number of Ukrainian companies are also interested in Lithuania’s Free Economic Zones. Those in Kaunas and Klaipeda has recently seen an inflow of foreign green field investment from German and US companies. It is worth noting that Lithuania is among the fast-growing regional leaders for international startups and fintech companies. We are extremely happy to see an increase in the number of Ukrainian startups among them. I believe this is the future of our business relationship.

Along with Ukraine and many other countries in the region, Lithuania currently faces demographic challenges due to high levels of labor migration. How is Lithuania approaching this issue?

Thanks to membership of the EU, Lithuanian citizens enjoy free movement including freedom of employment within the European Union on equal terms with other EU citizens. Due to this single market, and for a range of economic factors, a significant number of Lithuanian citizens have opted to study and work in other EU member countries. We estimate that there are more than 200,000 Lithuanians currently living elsewhere in the EU. After more than a decade of net outflows, this year saw a positive migration balance for the first time since Lithuania joined the EU in 2004. Sustainable economic growth since 2010 and new job creation are now attracting an increasing number of our citizens back home, while also stimulating labour immigration, mostly from neighboring countries such as Ukraine and Belarus. Ukrainians are currently the largest group of foreign nationals temporarily working in Lithuania, accounting for over 60 percent of foreigners in the Lithuanian labour market. Their skills and contribution to the Lithuanian economy are positively valued.

Since 1991, national identity issues and the politics of memory have often been sources of contention and conflict within Ukrainian society. What is the Lithuanian approach to the country’s Soviet inheritance, and what role does this play in shaping contemporary Lithuanian national identity?

After regaining independence in 1990, Lithuania has devoted significant efforts to revealing the historical truth of the country’s past and objectively evaluating historic events. During the 20th century, Europe, including Lithuania, survived two totalitarian regimes, the Nazis and Soviet Communism. Evaluating their crimes and establishing objective facts about the legacy of these totalitarian regimes became one of the priorities of Lithuanian national historical memory. To this end, we established an international commission and invited renowned scholars from the US, the UK, Israel, and Russia to join their Lithuanian colleagues and begin the process of evaluating the crimes of the past at the international level. Lithuania suffered enormous losses during the Soviet occupation. Almost 200,000 Lithuanians were deported to Siberia, Kazakhstan and other parts of the then-USSR. Thousands of resistance fighters, who remained active after 1945, suffered torture and death. We cannot ignore this important part of our modern history, and our efforts to address the past enjoy the support of an overwhelming majority of Lithuanian society. The Soviet occupation period has become an integral part of our education system and the subject of a nationwide public discussion, with the participation of national and international experts. In my opinion, there remains room for such a discussion in Ukraine. Dealing with the past requires courage from politicians to accept the truth, regardless how unpleasant it might be. This is a long but essential learning process, which Lithuania was able to start from the very beginning.