The Habsburg Empire experience of western Ukraine during the eighteenth, nineteenth and early twentieth centuries helped foster a sense of Ukrainian identity and rooted the country firmly in the European cultural universe while planting the seeds for eventual Ukrainian independence in 1991 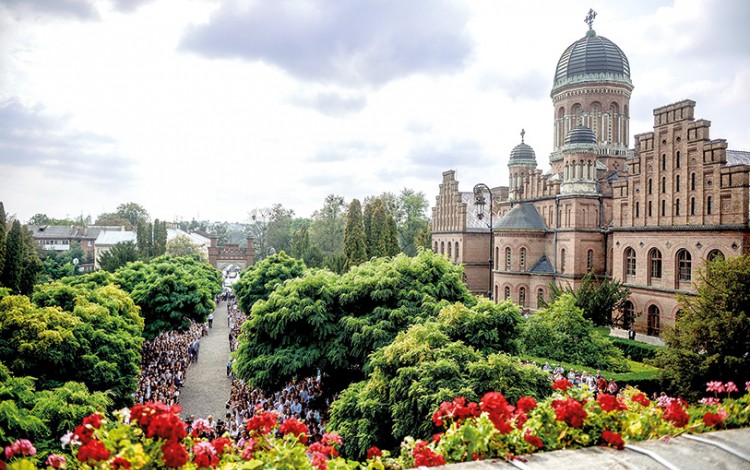 Monument to Habsburg Diversity: Today's Chernivtsi University Complex was formerly the Palace of the Bukovinian and Dalmatian Metropolitans of the Eastern Orthodox Church. It was built at a time when the Catholic Habsburgs ruled the cosmopolitan region
Business Ukraine magazine

Twenty-six years since it first gained independence, people still routinely refer to today’s Ukraine as a post-Soviet country. The Soviet experience, together with the Russian imperial epoch that came before it, are widely accepted as the definitive historical foundations underpinning the modern Ukrainian state. This highly Kremlin-centric perspective on Ukrainian history completely ignores the major roles played by numerous other powers in the formation of the Ukrainian nation, such as the Polish-Lithuanian Commonwealth and the Ottoman Empire.

Of all the empires to leave their mark on Ukraine, the legacy of the Habsburg Empire is one of the most important and enduring. From the palaces of Vienna, the Habsburg monarchy oversaw a sprawling multiethnic empire that encompassed much of Central Europe and lasted until the end of World War I. For over a century, this empire included large swathes of today’s western and southern Ukraine.

The Habsburg Empire’s Ukrainian subjects prospered under relatively tolerant Viennese rule. While their fellow Ukrainians across the border in the Tsar’s domains suffered from successive language bans and policies of relentless Russification, the Habsburg Ukrainians enjoyed significant degrees of local self-government and were able to develop Ukrainian-language media and literature alongside the emergence of a Ukrainian political culture.

This period of growing Ukrainian national consciousness under the Habsburgs helped fuel the failed statehood bids of 1917-21. Throughout the Soviet era, it transformed Habsburg Ukraine into an incubator of the Ukrainian national idea. Since 1991, this idea has slowly but steadily taken root across the whole country, remaining an important factor in Ukrainian identity politics to this day.

With his splendid beard and cultured air, Mr. Zhaloba would not look out of place in a nineteenth century sepia portrait of Habsburg grandees. He is widely acknowledged as Ukraine’s leading authority on Habsburg issues and speaks with the enthusiasm of somebody who has the pleasure of indulging their academic curiosity on a daily basis.

Over the past quarter of a century, he has spent years trawling through the imperial archives in Vienna and in his native Bukovina, piecing together the day-to-day realities of life in Habsburg Ukraine. The picture that has emerged is one of social tolerance and casual multiculturalism long before the term became politically fashionable in the Western world.

This is not the conclusion Mr. Zhaloba was expected to reach when he first began researching Ukraine’s Habsburg past as a Soviet undergraduate student in the early 1980s. At the time, the study of Ukrainian history suffered from the joint ideological constraints of Marxist-Leninist dogma and Great Russian chauvinism. Professors expected their students to denounce Habsburg rule in Ukraine as a classic example of oppressive colonialism. “We were supposed to acknowledge that the Habsburg Empire was actually far worse than the Tsarist Empire, where Ukrainians at least had the distinction of being oppressed by their fellow Slavs,” he quips. “The Habsburgs were not just imperialists. They were also foreigners!”

Despite the limitations of the period, Mr. Zhaloba was able to find evidence in the Soviet archives that contradicted the official party line. His source was impeccable: the writings of Vladimir Lenin. “I found a quote by Lenin in his book about the Balkan Wars where he says of the Habsburg Empire: “Even in this most backward of European countries, the people are guaranteed much more freedom than in Russia.” It was the first time any of my professors had come across this line of argument. They were not thrilled. It contradicted the official Soviet narrative in which everything was utterly miserable until West Ukraine joined the USSR in the 1940s. Everyone agreed on the wickedness of the Habsburg era, but nobody could satisfactorily explain where all the wonderful buildings came from.”

Ukraine Emerges as a Political Nation

The collapse of the USSR in 1991 freed Mr. Zhaloba from the absurdities of ideologically driven Soviet history and allowed him to split his research time between Vienna, Kyiv and his hometown of Chernivtsi, where the Habsburg legacy is writ large in the city’s stunningly eclectic architectural ensemble.

He identifies Chernivtsi’s National University Complex as being of particular interest. In recent years, this imposing collection of buildings has earned the nickname “Ukrainian Hogwarts” for its resemblance to Harry Potter’s fictional wizard school. However, to Mr. Zhaloba, the complex’s real importance lies in its symbolism. Dating back to in the second half of the nineteenth century, it originally served as the Residence of the Bukovinian and Dalmatian Metropolitans of the Eastern Orthodox Church. “It is amazing that the Catholic Habsburgs allowed this impressive Orthodox palace to be built at all. This makes it a monument to the values of religious tolerance they promoted. I’ve read German-language accounts of Habsburg Chernivtsi that suggest this was something people understood at the time as well.”

As a monument to multicultural tolerance, the Chernivtsi National University Complex is indeed hard to beat. As well as celebrating what was in imperial terms a minority religious denomination, it also features Star of David decorations on a clock tower cupola - a tribute to the local Jewish community’s contributions to the construction of the complex.

Mr. Zhaloba believes this climate of tolerance is one of the major legacies of the Habsburg era in Ukraine. In terms of historical importance, he places it alongside the idea of an independent Ukrainian state that first took root during the period of Viennese rule. “What we see today is the beautiful architecture they left behind, but these buildings are far from the only things the Habsburgs gave to Ukraine. They introduced Ukrainians to the politics of consensus and European parliamentary traditions. Habsburg rule gave Ukrainians the chance to develop as a political nation, gaining experience in regional administrations and in Vienna itself. Many of these Ukrainian politicians would go on to participate in attempts to create an independent Ukrainian state during the Russian Revolution. There were also pro-Ukrainian dissident movements in central and eastern Ukraine throughout the Tsarist period, but they tended to be more isolated and subject to physical destruction. Unlike under the Tsars, the Ukrainian political traditions that first flowered in Habsburg Ukraine were able to enter the social mainstream and proved resilient enough to outlive the entire Soviet era. In fact, it would be fair to say the Ukrainian state that emerged in 1991 was built on foundations dating back to the Habsburg Empire.”

To prove his point, Mr. Zhaloba refers to the spreading support for pro-Ukrainian candidates in successive Ukrainian presidential elections since the fall of Soviet Communism. When Ukrainians voted for their first independent head of state in 1991, the only regions to back the Ukrainian dissident candidate Vyacheslav Chornovil were three of the country’s former Habsburg regions in West Ukraine.

By the time of the 2004 Orange Revolution, pro-Ukrainian Viktor Yushchenko was able to claim majority support throughout Central Ukraine. In the 2014 presidential vote, pro-Ukrainian candidate Petro Poroshenko topped the polls throughout the entire country.

“These presidential elections demonstrate the step-by-step expansion of the Ukrainian vote as support for Ukrainian national identity and sovereignty has moved eastwards. This is also a vote for Ukraine’s European identity. Thanks to Habsburg Ukraine, the central parts of the country have remembered their own European roots that date back even further to the epoch of the Polish-Lithuanian Commonwealth. The whole country has now embraced this idea to a degree that would have seemed fanciful in the early 1990s.”

Critics of Ukraine’s post-Soviet identity politics have often accused West Ukraine of exerting a disproportionate influence on the national agenda since 1991 at the expense of the country’s Russophile contingent. Mr. Zhaloba prefers to see the ascendency of Ukraine’s European identity as a natural and inevitable process reflecting the preferences of a generation brought up in a world where the soft power of the European Union has replaced the harsh realities of the Iron Curtain. “Just look at how Ukrainians love to visit Lviv and Chernivtsi,” he says. “They enjoy these colorful and diverse former Habsburg cities. It is only natural that they would then want to implement the same European qualities in their own hometowns.”

The picture painted by Mr. Zhaloba of a tolerant and diverse Ukraine embracing European values and consensus politics is a PR man’s dream and a Kremlin apparatchik’s worst nightmare. Many would question whether modern Ukraine is actually capable of living up to this idealized image, but few would argue that it closely matches sentiments first introduced into Ukrainian society during the era of the patchwork Habsburg Empire.

As today’s Ukraine grapples with the identity issues raised by the Kremlin’s hybrid warfare and Putin’s “Russian World” propaganda, Mr. Zhaloba believes the country’s Habsburg inheritance has never been more relevant. “Notions of Ukraine’s European identity that first gained currency in Habsburg Ukraine are now found all over the country,” he says. “In the final analysis, the greatest legacy of Habsburg Ukraine may be independent Ukraine itself.”

About the interviewee: Ihor Zhaloba is Head of the Institute of International Relations and International Law at Grinchenko University and Co-Chair of the Austrian-Ukrainian Historical Commission