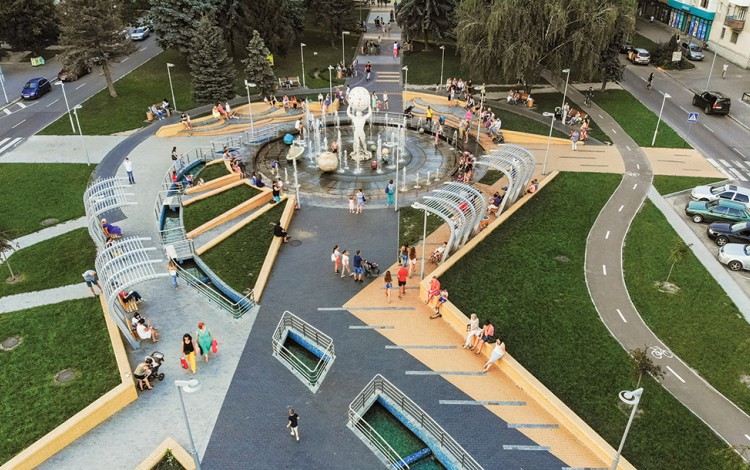 Model of municipal management: Vinnytsia has invested significant resources into the renovation of the city's public spaces
Business Ukraine magazine

September saw construction work get underway in Vinnytsia on a major new manufacturing plant for Austrian sporting goods giant HEAD. UkraineInvest Chairman Daniel Bilak says the project is a symbol of Vinnytsia’s investor-friendly attitude and sees it as the kind of flagship undertaking that could help to draw additional international brand names to the city. “The HEAD plant is an example of exactly the kind of investment Ukraine is looking to attract, offering export-driven high added value manufacturing while creating well-paid workplaces for skilled employees,” he comments.

This success was hard-won. Working on a referral from the National Investment Council under the President’s Administration, the government’s investment promotion agency, UkraineInvest, first had to convince HEAD executives that Ukraine was the right choice for a new production base that would be replacing three existing plants in the Czech Republic. They then worked with the Austrian sports manufacturer to identify the ideal location inside Ukraine. Vinnytsia came out on top, both due to objective factors such as pricing and location, and thanks to the can-do attitude of the regional authorities. “In terms of understanding how to interact with potential investors, Vinnytsia is one of the places in Ukraine that really gets it,” says Bilak. “The local authorities have a philosophy of treating investors like guests in their own home. I believe HEAD officials were attracted by that, and by the fact that the city obviously welcomed them.”

The arrival of HEAD is the latest step forward for Vinnytsia and reflects an outsized investor appeal that has also attracted the likes of Poland’s largest floorboard manufacturer Barlinek and US agribusiness giant Bunge. Today’s Vinnytsia is home to a major manufacturing facility of Ukrainian home appliances company UBC Group, while KNESS Group began work earlier this year on what will become the largest solar panel production plant in the country. Bilak argues that this diverse selection of investment success stories bodes well for Vinnytsia’s future development. “The one thing you can be sure of when it comes to potential investors is that they will talk to existing investors,” he says. “After all, you are judged by the company you keep. In the case of HEAD, they certainly seemed impressed by the neighborhood.”

Beyond purely economic factors, Vinnytsia also has much to recommend itself as a place to live and work. The city regularly tops international surveys of Ukraine’s regional centers and typically receives exceptionally high marks in opinion polls of local residents. It has managed to cultivate a reputation as a reliable partner for international financial institutions as well as the country’s strategic partners such as Switzerland and the European Union.

Bilak believes this positive image is primarily the result of smart city management and the effective use of limited resources, which have combined to create a standard of living that few other regional capitals in the country can match. For example, Vinnytsia has leveraged international partnerships to create one of Ukraine’s most efficient and convenient public transport systems, with busy fleets of trams and practical cycling lanes lending the city a quintessentially European air. “It’s a very people-oriented city. If I had to move away from Kyiv, I would choose to live in Vinnytsia,” says Bilak matter-of-factly. “Even in the suburbs, when you go for a stroll in the early evening you feel as if you could be anywhere in Europe.”

In addition to manufacturing, Bilak sees huge potential synergies between Vinnytsia’s tech and agribusiness sectors. The Vinnytsia region is among Ukraine’s leading agricultural producers, while the city has Ukraine’s sixth largest IT sector and is home to 11 of the country’s top 50 IT companies. This makes it a logical candidate to lead the kind of ag-tech boom that could help Ukraine move away from raw materials exports and begin to make progress up the production food chain. “Ukraine’s two great advantages are brains and grains,” says Bilak. “This translates into huge ag-tech potential in everything from drones and aps to new types of crops and seeds. Vinnytsia is ideally positioned to serve as a hub in this process.”

There is certainly unlikely to be a shortage of brains any time soon. Long a regional academic center, Vinnytsia’s higher education sector received a further boost in 2014 when Donetsk State University chose to relocate to the city after being forced to flee the conflict in the Donbas. Vinnytsia officials did all they could to make the new arrivals from Donetsk feel welcome, and the university was able to reestablish itself in central Ukraine within a matter of months. This unexpected arrival has had the effect of reinvigorating the local higher education industry by injecting a competitive edge that has helped raise the bar for the city’s entire student population. “The relocation of Donetsk State University was probably one of the best things that ever happened to Vinnytsia,” says Bilak. “With Donetsk University working hard to demonstrate that it was still a top drawer institution, this put enormous pressure on the city’s other universities, leading to a brain boom across Vinnytsia. The challenge now is to harness this potential.”

About the interviewee: Daniel Bilak is the Chairman of UkraineInvest