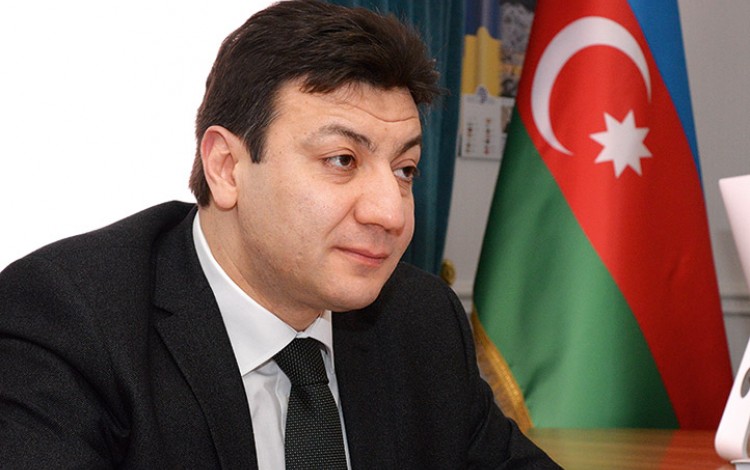 About the interviewee: Azer Khudiyev is the Ambassador of Azerbaijan to Ukraine
Business Ukraine magazine

If embassy buildings are statements of intent, then the Azerbaijan Embassy in Kyiv is making a very bold statement indeed. Situated on a sprawling multi-hectare plot of land in the Lukyanivska district of the Ukrainian capital, the Azerbaijan Embassy complex is one of the largest and most impressive in the country. Over the years, it has drawn admiring glances from many in the Kyiv diplomatic community including the Americans, who reportedly once sought to acquire the plot for their own diplomatic mission.

The complex is so spacious that residential quarters are currently under construction to house embassy staff on site. A landscaped park named after modern Azerbaijan’s founding father Heydar Aliyev borders the embassy complex and adds to the overall impression. Designed in the distinctive Azerbaijani style, the park features a luxuriant waterfall fountain and regularly appears in media rankings of Kyiv’s best park areas.

This imposing Azerbaijani presence is testament to the importance placed by Baku on bilateral ties. Ukraine and Azerbaijan are celebrating twenty-five years of diplomatic relations this year, and cooperation between the two former Soviet republics has never been more strategically important. The two nations are seeking closer ties with the Euro-Atlantic community while navigating a post-Soviet neighborhood dominated by a resurgent Russia. Both countries have important roles to play in the New Silk Road project and other key geopolitical infrastructure initiatives designed to connect Asia and Europe.

The man charged with overseeing the development of Baku’s bilateral relationship with Kyiv is Azerbaijan Ambassador to Ukraine Azer Khudiyev. Ambassador Khudiyev arrived in Kyiv in 2016 to begin what is his second diplomatic posting in Ukraine, having previously served at the Azerbaijan Embassy in 2003-2005. As the Caucasus nation’s top diplomat in Ukraine, he finds himself working to foster closer ties in what is an exceptionally transitional environment that combines great potential with considerable challenges. “Azerbaijani companies are very interested in Ukraine. There is widespread recognition of the opportunities that are on offer here, but for many potential Azerbaijani investors, the risks are still too high,” he says, citing raider attacks and other fundamental law and order issues as key obstacles to greater Azerbaijani investment in Ukraine.

There is certainly room for considerable growth in bilateral trade. Turnover in 2016 amounted to USD 334 million, 2.6 times lower than the figure for 2013. Efforts are underway to boost this total by bringing together the two business communities. Spring 2017 saw a major Ukraine-Azerbaijan economic forum take place in Kyiv, attracting the participation of more than 40 Azerbaijani companies and holdings. It is hoped that similar events will help to strengthen economic ties while expanding cooperation beyond traditional spheres such as the energy sector.

Ambassador Khudiyev identifies the aerospace industry as one of the most attractive options for deepening bilateral cooperation. “Ukraine has great expertise and strong traditions in this sector, while aerospace has been identified as a priority for Azerbaijan,” the Ambassador comments. The groundwork for this process is already in place. In recent years, Baku has increased cooperation with Ukraine’s flagship Antonov aircraft manufacturing company and has placed orders for a number of planes, potentially paving the way for further future aerospace collaboration.

Energy cooperation has long been one of the cornerstones of bilateral economic ties between Azerbaijan and Ukraine, and this remains the case today. Azerbaijan’s state-owned oil company SOCAR has a strong presence in Ukraine with filling stations and refineries across the country and an overall investment in the Ukrainian economy of more than USD 200 million. Ukraine’s desire to achieve energy independence opens up considerable opportunities for greater cooperation with energy-rich Azerbaijan. “In light of Ukraine’s energy sector reforms and the search for new partners, Azerbaijan could expand its presence on the Ukrainian domestic gas market,” says Ambassador Khudiyev, before stressing the need for Ukraine to create the right legislative conditions for long-term supply contracts.

By far the most eye-catching aspect of Azerbaijan-Ukraine ties at present is the role both countries can potentially play in the ambitious Beijing-led plans to create a new transport corridor linking the Asia-Pacific region to European markets. Dubbed “The New Silk Road”, this vast infrastructure undertaking envisages a route bypassing the Russian Federation and travelling through Kazakhstan, Azerbaijan, Georgia and Ukraine via the Caspian and Black Seas. With Azerbaijan looking to diversity its economy away from the energy sector, transport is one of the key directions as Baku seeks to take advantage of the country’s strategic location. Cooperation with Ukraine in this direction offers a number of obvious synergies. In November 2016, Ukraine and Azerbaijan’s railway operators signed a Memorandum of Understanding committing them to develop rail freight cooperation. This is a step in the right direction, but Ambassador Khudiyev believes it is just the beginning. “If we analyze the geography and transport potential of both countries, it is obvious that the existing potential has not yet been realized,” he comments.

While both Azerbaijan and Ukraine are members of the European Union’s Eastern Partnership, Baku does not envisage following in Kyiv’s footsteps and securing an EU Association Agreement for the Caucasus nation similar to the agreement signed by between Kyiv and Brussels. Instead, Ambassador Khudiyev says Azerbaijan seeks a strategic partnership with the EU that will reflect the specifics of the Baku-Brussels relationship. Nevertheless, Ukraine’s ongoing integration process can provide Azerbaijan with valuable insights. “The Ukrainian experience is very interesting for Azerbaijan,’ explains Ambassador Khudiyev. “There is a long list of integration themes where we can benefit from direct reference to the successes of shortcomings of Ukraine’s own experience.”

Ukraine’s EU integration process is taking place against a backdrop of armed conflict in the east of the country, inevitably restricting the country’s ability to progress on a wide range of issues. There are echoes of Ukraine’s current situation in Azerbaijan’s own post-Soviet experience. “Azerbaijan was one of the first countries in the region to suffer from the problem of separatism. Starting from the late 1980s, our nation has faced an unprecedented threat to its territorial integrity. As a result of this aggression, nearly one million Azerbaijanis have become refugees or IDPs,” says the Ambassador. He comments that the conflict in the east of Ukraine, as well as all the frozen conflicts in the post-Soviet world, are impediments to regional development as a whole, but stresses Azerbaijan’s commitment to support Ukraine during this challenging period. This solidarity is in part a reflection of Azerbaijani recognition for the role played by Ukraine during the conflict in Azerbaijan back in the 1990s, when Ukraine helped to provide vital training and military hardware at a time when few others were willing to stand with Baku. “We will never forget this,” says Ambassador Khudiyev. “Our goal is to honor these ties and build on this positive relationship”.