“A bigger role for smaller farmers” 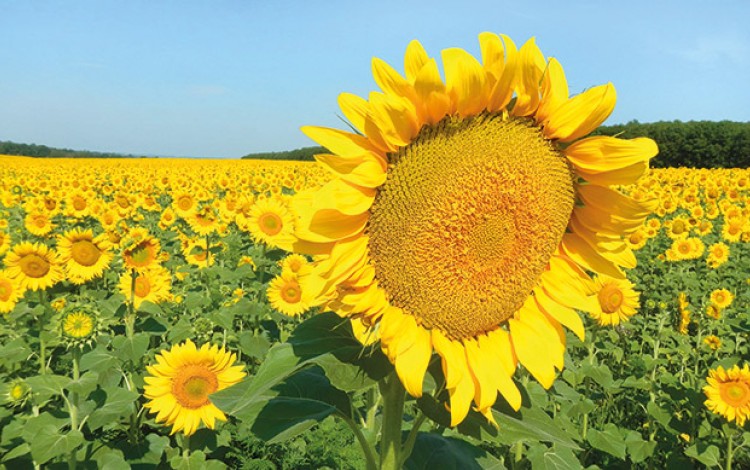 Europe's breadbasket: Ukraine is a potential global agricultural superpower but inefficient Soviet-era methods and bureaucracy must be replaced if the country is to reach its potential and feed the world
Business Ukraine magazine

Despite frustration over the slow pace of reforms, European attitudes are slowly but surely seeping into everyday Ukrainian life. This process is even beginning to make itself felt in the way the government interacts with the public. Not so very long ago, the interiors of Ukraine’s government ministries were every bit as intimidating as the Stalinist facades of the buildings they inhabited. An attitude of splendidly isolated authority pervaded these vast halls and corridors of power, leaving visitors feeling distinctly unwelcome and making communication with ministry personnel a relatively thankless task. These days, the mood upon entering the Ministry of Agrarian Policy and Food is markedly different. The ministry is still located in an imposing Stalin-era building located on Kyiv’s downtown Khreschatyk Street, but upon arrival, it is immediately obvious significant efforts have been made to transform the aesthetic and move away from the post-Soviet ambience. Instead of being accosted by humorless security sentinels demanding ‘dokumenti’ and asking what business you have encroaching on their hallowed turf, visitors to the ministry are now greeted by bright young Ukrainian reception staff and a public information center designed as the first port of call for Ukrainian farmers looking to reach out to EU partners.

These cosmetic changes are not all the work of new Agrarian Policy Minister Taras Kutovyi. After all, he has only been on the job for around a month as one of the many ministers to take office in April alongside new Prime Minister Volodymyr Groysman. Nevertheless, they reflect Kutovyi’s stated vision of a more businesslike and communicative Ministry better designed to meet the needs of one of Ukraine’s most globally competitive industries.

Minister Kutovyi arrives somewhat late for his interview with Business Ukraine magazine and is full of courteous apologies. His excuse is a good one - the delay was due to a meeting with his German ministerial counterpart and an accompanying high-level delegation from the Bundestag, who came to Kyiv looking for ways to enhance bilateral cooperation in the agricultural sector. The information center located downstairs in the ministry entrance hall is among the early fruit of this enhanced German-Ukrainian agricultural cooperation. It is also an indication of the ministry’s focus on helping smaller Ukrainian agricultural enterprises make the most of the opportunities presented by EU integration. “If I could sum up my priorities in a single sentence, I would say there must be a bigger role for smaller farmers,” the minister states. “We must concentrate on small and medium-sized enterprises with less than 500 hectares of land and provide them with the support they need to become sustainable and competitive in global niche markets.”

Given his extensive private sector background, this business-like approach is exactly what you would expect from Kutovyi. Prior to entering parliament for the first time in 2012, he held a number of senior executive positions in the real estate and agricultural sectors. Thanks to this pre-parliamentary career, Kutovyi was able to gain first-hand experience of the challenges faced by Ukrainian companies looking to attract international investment and develop global reach, including involvement in Ukraine’s first IPO on the London Stock Exchange.

After becoming an MP, Kutovyi served as Deputy Chair and then as Chair of Ukraine’s Parliamentary Agricultural Committee, paving the way for his recent elevation to ministerial status. In this sense, the forty-year-old Kutovyi is a hybrid of the rival careerist politicians and technocrats currently vying for the right to dictate the direction of the new Ukraine. Like many of the 2014 governmental intake, he is part of a new English-speaking generation with a significant record of private sector success. However, he also brings credible prior government experience to the table – something many of the political novices in the previous government lacked.

Kutovyi’s strategic emphasis on agricultural SMEs aims to help Ukraine take advantage of its natural agrarian riches and capitalize on enhanced access to EU markets by producing more of the value added products European customers are seeking. He has taken his lead from some of the European Union’s most successful agricultural models, citing Denmark’s comparatively small but impressively productive agrarian sector as a particular inspiration. The overall objective, explains Kutovyi, is to move the Ukrainian agricultural industry to the next level. “It’s all about efficiency,” he says. “By focusing on products with added value rather than relying totally on commodities, the contribution of the agriculture sector to Ukraine’s GDP will rise. It’s time to step up.”

Initial optimism over the free trade component of Ukraine’s Association Agreement with the European Union has since given way to concerns over continuing EU quotas on a range of Ukrainian agricultural exports. However, Kutovyi believes a greater focus on value-added products and niche markets will help counter Ukraine’s quota blues, offering opportunities to export produce not subject to restrictive limitations. He acknowledges the current quotas represent a major barrier for many of Ukraine’s giant agricultural concerns, but points to the huge opportunities for SMEs if they are able to tailor their output more specifically to the needs of nearby European markets. By way of example, the minister points to free range eggs – a product not subject to EU quotas under the terms of the Association Agreement, but one very few Ukrainian farmers are currently able to offer.

Another potentially bountiful sector for Ukrainian farmers is the organic foodstuffs market. Kutovyi believes Ukraine is particularly well placed to meet growing global demand for organic produce and says Germany and Japan are among the countries to have already expressed an interest in organic imports from Ukraine. At present, the organic share of the Ukrainian market is less than 1%, but Kutovyi says this could eventually rise to as high as 5%.

Encouraging Ukrainian farmers to become more market-orientated in their choice of crops is one thing, but securing EU certification is quite another. Meeting EU requirements is a complex and costly repositioning process that cannot happen overnight. Kutovyi recognizes SMEs will need government assistance if they are to meet the necessary EU standards and make inroads into EU markets. “The Association Agreement creates huge export opportunities for SMEs but they require our support to complete the EU certification process and in order to find European partners. We will help them to grow market share. We also expect the dialogue with our European colleagues to deepen in parallel with the growing exchange of experience,” he says.

EU markets are far from the only focus for the Ukrainian agricultural sector. With the once dominant Russian domestic market now largely off-limits to Ukrainian agricultural exporters, a process of global expansion is well underway with farmers seeking new market access, primarily in Africa and Asia. Kutovyi names Iran as particularly appealing. He sees the lifting of sanctions over Tehran’s nuclear programme as a huge opportunity for Ukrainian exporters, especially in light of the traditionally strong position enjoyed by Ukrainian agricultural produce on the Iranian domestic market. Export volumes to countries including China, Egypt and Israel have already experienced significant growth in the past two years – a process that looks set to continue in the second half of 2016. Meanwhile, the entire Middle East, with its limited agricultural capacity, growing population and close geographical proximity, offers Ukrainian farmers a vast potential marketplace for the country’s core agricultural commodities. Unsurprisingly, this has led some analysts to speak of an over-emphasis on EU trade at a time when Ukrainian agriculture is making major inroads in some of the world’s most attractive marketplaces.

On the agenda: deregulation and land reform

Kutovyi’s predecessor as Ukrainian Agrarian Policy Minister Oleksiy Pavlenko won plaudits during his brief period in office for overseeing the removal of a wide range of suffocating regulatory practices. This process is set to continue under Kutovyi, who also played a key role in the deregulation process via his position as Chair of the Ukrainian parliament’s agricultural committee. However, he points out that even in a highly bureaucratic post-Soviet environment, deregulation has its limits. “In some cases we may even have gone too far,” he concedes.

The centerpiece of the current reform agenda will undoubtedly be the law on land circulation, which Kutovyi hopes will pass its second reading in parliament by the end of 2016. This proposed reform aims to introduce the right to sell and pledge agricultural land lease holds. The minister argues it has the potential to make Ukrainian land a far more marketable commodity while increasing transparency and helping to generate huge amounts of working capital.

He is confident the law in its current form will not provoke populist opposition, despite the long history of political posturing over the extremely sensitive issue of agricultural land sale. “It is fair. There is no counter-argument,” he states matter-of-factly. Nevertheless, Kutovyi accepts the success or failure of this land reform effort will go a long way to determining the broader investment climate in the Ukrainian agricultural sector, adding, “If the situation regarding the land itself is not good, nothing else will work.”

About the interviewee: Taras Kutovyi is Ukraine’s Agrarian Policy Minister