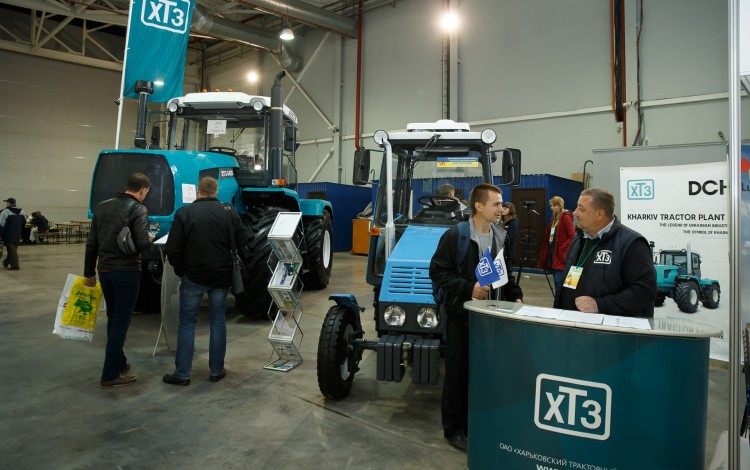 The fourth annual AGROPORT international agribusiness forum opened in early October at Kharkiv International Airport as the eastern Ukrainian region looks to strengthen the position of the local farming industry on international markets. The event is hosted in the cargo terminal of the airport complex, built by DCH President Oleksandr Yaroslavsky as part of Kharkiv’s preparations for Euro 2012. AGROPORT 2017 attracted participation from almost 200 agrarian producers and 30 representatives of international financial organizations.

As the head of the Kharkiv Regional State Administration Yulia Svetlichna noted during her keynote address, one of the main goals of AGROPORT is to present Kharkiv region to potential partners. "We aim to present the Kharkiv region as a consolidated and powerful hub for agricultural production, storage and transportation. Kharkiv also offers a skilled workforce, scientific knowhow, and a long tradition of agricultural machinery production. We are eager to demonstrate the openness of the authorities to the further development of the agro-industrial sphere of Ukraine,” said Governor Svetlichna.

Meanwhile, DCH Group Vice-President Elena Derevyanko greeted forum guests on behalf of Mr. Yaroslavsky and stressed, "AGROPORT was and still is DCH's favorite child. Kharkiv International Airport serves as the "assembly point" of a high-potential logistics and business hub. We see great potential in the airport as a focus to promote international investment activities, including in the agricultural sector. The DCH-owned Kharkiv Tractor Factory, which plays a special role in the Ukrainian agro-industrial complex as a whole, is also important to this strategy.” Ms. Derevyanko pointed to the participation of Kharkiv Tractor Factory as a general sponsor of the traditional Field Day within the framework of the AGROPORT forum. Officials from the factory also participated in ceremonials awarding the most successful agrarian brands at the forum.

Ms. Derevyanko explained that the key themes of AGROPORT each year are in line with global trends, including the most pressing issues identified by the United Nations. The coordinator of development programs from the UN’s Food and Agriculture Organization (FAO), Mikhail Malkov, noted numerous cooperation initiatives with the forum and announced the launch of a new FAO project that is set for implementation in Kharkiv region.

The key focus of the forum this year was new partnerships. During the first day of AGROPORT 2017, two memorandums on cooperation in the agrarian sphere were signed, one at the inter-regional level between the Kharkiv, Lviv and Kherson regions. The second focused on scientific and technical cooperation between Khartsyzsk Tractor Works and Kharkiv National Agricultural University. The forum also brought together farmers from across Ukraine, as it has done since 2016, as part of the ‘West-East” initiative. The agenda of the forum included a 5 October business forum focusing on the foreign and domestic food markets in Ukraine. The 6 October agenda features a scientific conference on the adaptation of agriculture to the challenges of climate change, while on 7 October participants will spend a Field Day at the demonstration fields of the Kharkiv National Agricultural University.