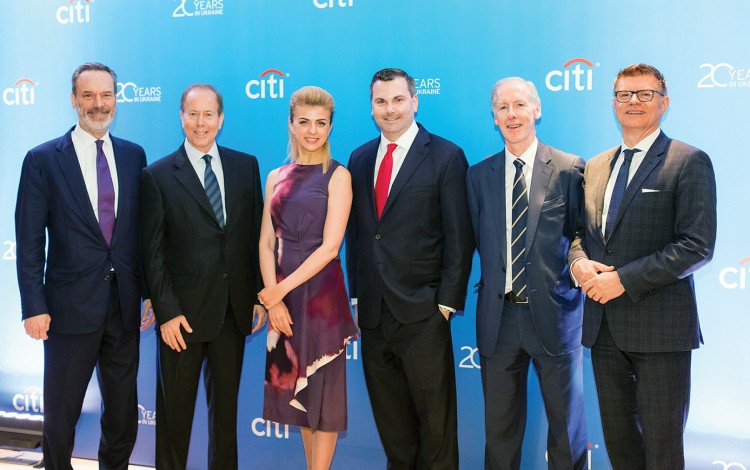 The only US bank in the country, Citi established its representative office in Ukraine in 1997, which was incorporated as a wholly-owned subsidiary in 1998, making it the one hundredth country in Citi’s global network. The bank’s focus continues to be on global corporations and large Ukrainian companies representing virtually all sectors of the Ukrainian economy. Through its network covering over 160 countries across the globe, the bank facilitates unprecedented access to international markets as well offering a wide range of cash management products, foreign exchange services, and financing instruments to its customers.

As Ukraine has undergone fundamental economic, societal and political changes, Citi has remained an active participant of the corporate agenda in the country, dedicated to supporting the growth of the local economy. Citi was among the first banks in Ukraine to execute complex financial transactions with FMO, Kievstar, Galnaftogas, Astarta and Kernel in the 2000s. Citi played a leading role in the benchmark USD 1 billion framework agreement for GE Ukraine – this transaction marked a major milestone in the country’s efforts to modernize its transportation infrastructure and strengthen its position as a key European rail hub and trade corridor. In 2017, Citi held a first of its kind forum on shared service centers in Ukraine and brought together international businesses, consulting agencies, and regulators to discuss the opportunities presented by Ukraine as a market for shared service centers.

Committed to its clients in Ukraine, Citi has spearheaded a number of transformative projects supporting the development of the local financial market and bringing best global practices to the country. In 2005, the bank facilitated a reform to change FX market rules and empower its clients with hedging instruments. A couple of years later, Citi partnered with a group of other Ukrainian banks to launch the Kiev Prime index (interbank rate benchmark).

Innovations are core to Citi’s value proposition. Most of the bank’s products and services are accessible to clients via its award-winning online banking platform CitiDirect that connects the bank and its clients throughout Ukraine and around the globe. In addition to the desktop CitiDirect online banking version, Citi pioneered the tablet and mobile banking experience for local corporates by introducing CitiDirect for Mobile and Tablet. In 2016, the bank launched commercial cards in Ukraine – a solution based on Citi’s globally-integrated and technologically advanced proprietary platform.

People are the most valuable asset of the bank. Citi started with five employees back in 1997, and the staff has grown to a team of over 150 highly qualified professionals dedicated to serving their clients. The bank also continuously builds and develops relationships with the leading universities based in Kyiv as it welcomes the best students at its Ukrainian headquarters at Dilova Street. Citi also launched Citi Career Center which is a charge-free educational project aimed at helping students and graduates to understand the banking sector.