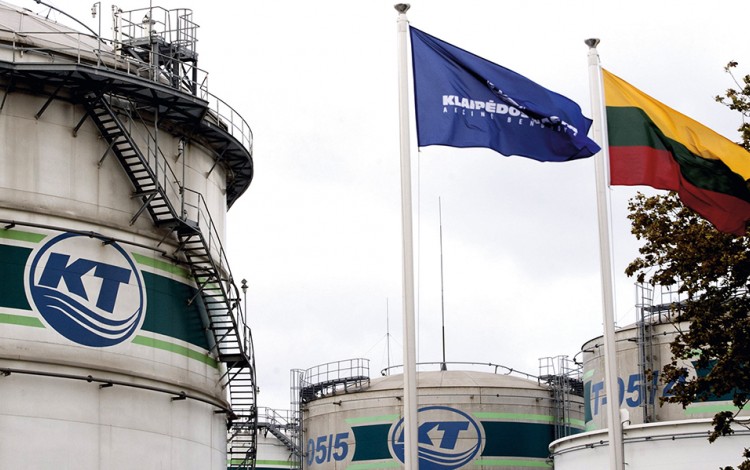 As the country enters its second post-revolutionary winter heating season, Ukraine continues to be unable to develop a competitive and cost effective energy mix for domestic consumption. In recent weeks, Naftogoz CEO Andriy Kolobev has stated that he believes Ukraine can leave Russian gas out of its energy supply considerations and only purchase from Europe by 2016. The country’s political leaders have also voiced similar plans to end reliance on Russian supplies. This is a very ambitious goal in the absence of a more established and diversified supply source.

In early October, the International Republican Institute (IRI) with the support of the United States Agency for International Development (USAID) brought a delegation of Ukrainian municipal leaders from the cities of Mykolaiv and Kherson in southern Ukraine to the coastal city of Klaipeda on the Baltic Sea. The objective of the trip was to visit examples of Lithuania’s thrust for energy independence and see the role played in the process by foreign investment.

One of Ukraine’s biggest neighborhood cheerleaders, Lithuania continues to punch above its weight in the region. The Lithuanian government has managed to demonstrate through both rhetoric and results how to make the transformation from dependency on Russian energy supplies. Lithuania has been able to retake the initiative to create an energy policy that benefits not only domestic consumption but also boosts the country’s export economy as well. In addition to national policy and large-scale government initiatives at the local level, Lithuanian cities are also taking the initiative to attract foreign investors into the energy sector - from converting municipal waste in Vilnius and Klaipeda into heat and electricity, to a floating LNG terminal on the Baltic Sea delivering globally purchased gas to Lithuania’s domestic grid.

Ukraine has long struggled to get its act together with its own LNG plans. The most recent setback came in 2013 under the Yanukovych administration, following a public signature ceremony between the Government of Ukraine and an alleged representative of the Spanish natural gas utility company, Gas Natural Fenosa. This fiasco ended when Gas Natural Fenosa officials announced that their ‘representative’ was actually a ski instructor from Barcelona whom the company claimed did not represent them. Gas Natural Fenosa said that they had not committed to the investment in Odesa and, in effect, the deal was dead. Inevitably, rumours swirled of Russia’s Gazprom swooping in to kill the deal under the table. Whatever the reason behind the U-turn, after this public embarrassment, no new serious attempt to attract LNG investment has been mounted. This lack of LNG activity comes despite Prime Minister Yatsenyuk stating that energy independence would be a key policy reform for the new government in 2014.

From energy dependency to energy exporter

Back in Lithuania, the march towards energy independence is taking place at a different pace. At the municipal level in the coastal city of Klaipeda, Finnish investment and technology in the city is improving ecology, providing financial incentives for private tenders on municipal waste collection, and generating clean energy for homes and businesses. The entire supply chain for this operation involves Lithuanian, Finnish and Norwegian partners.

Just off the coast of Klaipeda, the appropriately named Independence, a hulking 290-meter ship, rides at anchor in the Curonian Lagoon. It stores liquefied natural gas (LNG) and is also designed for the regasification of LNG for commercial use and export. The Independence is a game changer not only for Lithuania – it changes the energy situation for the entire region.

When the terminal became operational on 3 December, 2014, Lithuania became only the fifth country in the world to be using such technology. Lithuania’s ability to purchase liquefied gas globally, regassify it itself, and then pump this gas into its national grid circumvents its previous reliance on the fixed infrastructure of pipelines and monopolistic purchase/pricing agreements. Reselling gas onwards to inland customers or serving as a transit terminal for other regional buyers are strong economic advantages for Lithuania.

Time for a Ukrainian LNG terminal

In light of these regional examples of energy innovation and foreign investment, there should be much thought and discussion on not only exploring how to initiate such projects in Ukraine, but also of how to put together a clean local business environment with professional managers and visionaries who are not only serving their own personal short-term financial interests.

This requires strong national leadership, setting a clear energy diversification strategy that puts the national interest above individual interests, and an established and enforced rule of law that protects both foreign investors and innovative local leaders and municipalities.

About the author: Michael R. Druckman is the Ukraine Country Director for the International Republican Institute (IRI). You can follow him on Twitter at @MikeDruck