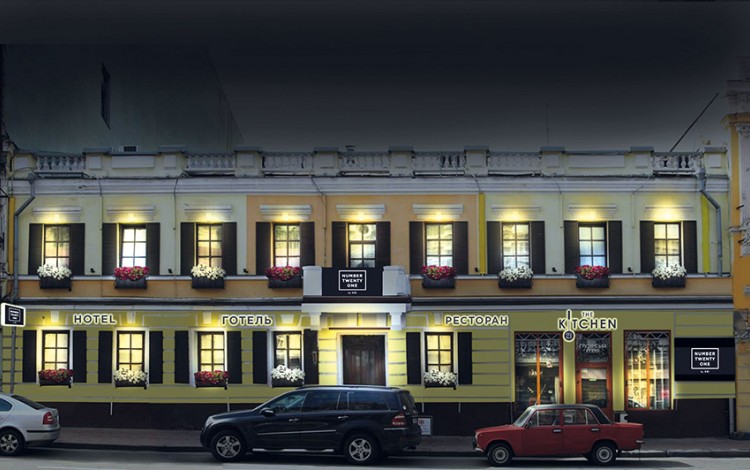 September sees Swiss-based hotel management group DBI add a second hotel to its collection in Ukraine, with the rebranded and refurbished “Number Twenty One by DBI” hotel in Kyiv’s historic riverside Podil district officially joining the group. The hotel, formerly known as the Impressa, has undergone a complete renovation with the new-look venue now under DBI management. It joins the Ramada Encore Kiev in the DBI’s expanding Ukrainian portfolio.

DBI Chief Operating Officer Irantha Duwage sees Number Twenty One by DBI as a lifestyle hotel in the spirit of London’s Haymarket Hotel. Located on Sahaidachnoho Street in central Podil, the hotel is an intimate affair with its own restaurant “The Kitchen 21”. Mr. Duwage regards the Podil venue as next step in the hotel group’s regional expansion agenda that focuses on both managing existing hotels in partnership with owners and establishing new hotels in a range of different client categories.

Construction work is already underway on a seventy-five to eighty room venue close to Kyiv City Airport that will operate under DBI’s “Moi” brand. Mr. Duwage describes the project as a “luxury hostel concept” and says the aim is to occupy a vacant niche in the Ukrainian hospitality market for high quality and economically competitive accommodation aimed at frequent travelers. “We want to provide the same kind of experience that guests in this category have come to expect in places like London or Copenhagen. In today’s Kyiv, there is a lack of quality in this segment of the market but huge potential.”

Further DBI projects penciled in for 2018 include two venues in Kyiv’s Obolon district, one of which is set to operate under the “Sync” brand, which is designed to cater specifically for millennials and features a high level of app-based automated services. There are also plans for venues in regional capitals such as Odesa and Dnipro. “Today’s young generation are very mobile. They are comfortable traveling from one city to another and tend to have high demands when it comes to issues of value and service standards,” says Mr. Duwage. “Their priorities are convenience and reliability. Anyone who can provide this will be successful.”

The DBI vision for Ukraine anticipates rising domestic demand for quality hotel options as well as the further development of the country’s hospitality and tourism sector as a whole. Mr. Duwage sees signs of progress within the hotel industry, with occupancy rates continuing to climb from record lows during the height of the geopolitical crisis in 2014. However, he argues that excessive and outdated regulations continue to act as barriers to greater international investment. “Finding the investors and carrying out construction works in Ukraine are actually the easy parts,” he says. “The real problems are caused by rules and regulations that are often out of date compared to contemporary European market norms. This often leads to rising costs that can add anything from ten percent to thirty percent onto the cost of a project, which often represents the investor’s profit margin. If the regulatory aspect of the industry could be updated and streamlined, the Ukrainian market would rapidly become much more attractive to international investors.”

Time for Kyiv to Shine

With over five years of experience in the Ukrainian hotel industry as General Manager of the Ramada Encore Kiev hotel, Mr. Duwage is confident that broad market trends in the international hospitality sector are slowly aligning in Ukraine’s favor. Like many of his colleagues in the Kyiv expat community, he is particularly enthusiastic about Kyiv’s tourism potential. Unsurprisingly, he would like to see much greater efforts undertaken to promote the city among international audiences. “I have always believed that Kyiv has the potential to become the new Prague. It has literally everything in order to make itself attractive to today’s traveler. There are parks, beaches and all manner of beautiful history on show, but Kyiv has not yet worked out how to take advantage of this appeal,” he says. “It would be great to see a genuine tourism bureau headed by experienced professionals who understand how the industry works and appreciate the crucial role tourism can play in the wider Ukrainian economy. Ultimately, now might be the right time to consider establishing a Ministry of Tourism at the national level.”

Such sentiments are commonplace among hospitality industry professionals in the Ukrainian capital and elsewhere in the country. There is a sense within the industry that things are moving to the next stage, but many believe much more would be achievable with greater state support. Mr. Duwage points to the many seasoned expatriate professionals managing hotels in Kyiv as a resource that could add real value to Ukraine’s emerging tourism strategy. “There are numerous very experienced figures currently occupying senior positions in the Kyiv hotel industry, many of whom have worked in leading hotels all over the world. This experience would be invaluable for Ukraine as the country looks to raise its profile establish itself as an attractive destination.”

Mr. Duwage argues that Ukraine would benefit from identifying the specific segments of the tourism industry it is most interested in focusing on. He points to business tourism as an obvious growth sector, with Ukraine’s large domestic market and convenient geographical location making it a potentially competitive venue for conferences, forums and industry events. “This is a country with a population of more than forty million. All of the big multinational companies already have well-established presences here,” he explains. “Kyiv is a two-hour flight from a whole host of European and Middle Eastern destinations. The city is also in a good position to host visitors from Asian markets, being significantly closer than other regional destinations in Central Europe.”

With many Ukrainian tourism industry observers still in the habit of looking towards Europe as the most obvious source of future tourists, this observation about Ukraine’s convenience for Asian travelers is both timely and pertinent. Recently introduced changes to Ukraine’s visa policies towards India have already borne fruit according to Mr. Duwage. This trend highlights the growing importance of Asian markets within the international tourism industry and the opportunities for Ukraine. “The number of Indian visitors staying with us has increased dramatically within the past two months since the simplification of the visa regime,” he says. “This is the way forward. No country can afford to close its doors to the outside world anymore. India has the fast-growing middle class in the world and there is huge appetite for travel. Ukraine is in a good position to gain from this.”

Part of the challenge is raising awareness of Ukraine as a potential destination among outside audiences. Mr. Duwage would like to see the state take an active role in this process and thinks it would make sense to tailor promotional campaigns to specific country audiences by employing positive trip appraisals from fellow nationals. “I have considerable experience over the years of international friends visiting and being overwhelmingly impressed. No matter where they live, they are always ready to come back to Kyiv. In fact, it would be difficult to find anyone who has spent time in the Ukrainian capital and has anything bad to say about it,” he reflects. “Using these positive testimonials would be a great way to appeal to specific audiences. It would require some investment on the Ukrainian side, but the returns would be outstanding.”

About the interviewee: Irantha Duwage is the Chief Operating Officer of Swiss-based hotel management group DBI