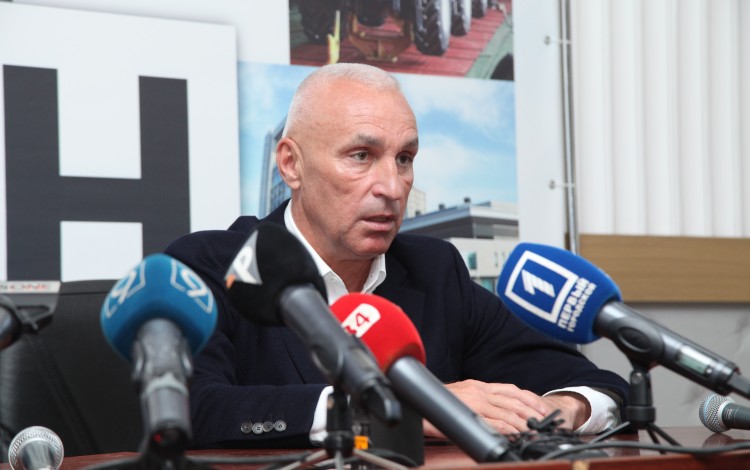 Representatives of Oleksandr Yaroslavsky’s DCH Group have officially taken over the management of iron ore production facility Sukha Balka following the Group’s 25 May purchase of the industrial object from EVRAZ Group in a deal worth USD 100 million.

Speaking during the handover in the Ukrainian industrial hub Kriviy Rih, Mr. Yaroslavsky said he was particularly pleased to be returning to a region where he had previously done considerable amounts of business. “I first came to this part of Ukraine 22 years ago and have worked with many regional enterprises, so this is something of a homecoming for me. It’s great to be back in Kriviy Rih.”

The Kharkiv-based business leader promised to develop the industrial concern without introducing major changes to the existing operations or workforce. “There will be no rapid changes. We will maintain all the best traditions of Sukha Balka while incorporating industrial innovations from DCH.”

Responding to the question of why he chose to purchase the enterprise, Mr. Yaroslavsky commented, “It is boring in life to just hang onto your money. You need to do something with it. We are Ukrainians, so it is only natural that we choose to invest where we live.”

EVRAS Group Vice-President Denys Novozhenkov confirmed that they had been in contact with numerous potential buyers regarding Sukha Balka, but said the decision to conclude the sale with DCH Group reflected the Group’s reputation as one of the most responsible industrial investors in Ukraine.

Senior DCH asset manager Vitaliy Basha has been appointed as Director General at Sukha Balka. He confirmed that the DCH team plan to spend the next few months assessing the situation at the industrial enterprise in order to draw up a development strategy.

DCH Group is one Ukraine’s largest industrial groups with a diverse portfolio of previous investment involvement across a range of industries. High-profile investments have included UkrSibbank, Azot in Cherkassy, and Kyivstar. The Group played a key role in Kharkiv infrastructure projects ahead of the Euro 2012 football championships, when Kharkiv was one of four Ukrainian host cities.

Recent acquisitions include the iconic Kharkiv Tractor Factory. Mr. Yaroslavsky’s Group renewed production at the factory in early 2017 following a ten-month pause. The Group is also currently in the process of purchasing Kyiv-based insurance company INGO Ukraine. Formal procedures over the purchase of a 25% stake are reportedly nearing completion, while DCH officials have confirmed their intention to increase their interest in the insurance company to 100%.