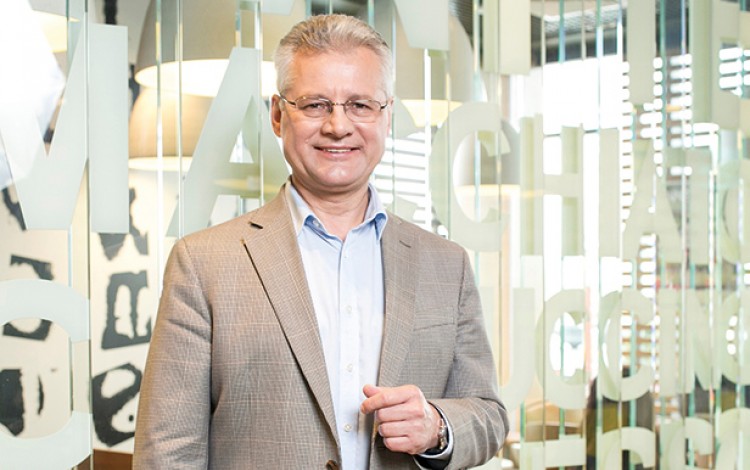 About the interviewee: Grzegorz Chmielarski is Managing Director of McDonald’s Ukraine and ACC Board of Directors Chairman
Business Ukraine magazine

What motivates the mega-busy country manager of a global brand to dedicate precious spare time to a demanding voluntary role at the helm of Ukraine’s most high-profile business association? For ACC Ukraine Board Chairman Grzegorz Chmielarski, it is all about making a meaningful contribution towards Ukraine’s post-Soviet transition while also interacting with some of the country’s top business brains.

Mr. Chmielarski took over as ACC Ukraine Board Chairman at the American Chamber of Commerce in Ukraine (ACC) in early 2017 following three years as a member of the board. He has been involved with the work of the Chamber ever since arriving in Ukraine in December 2013 as Managing Director of McDonald’s Ukraine. Despite facing the huge challenges of overseeing a nationwide network of restaurants during a time of unprecedented national crisis and turbulence, he has remained engaged with the ACC throughout.

He tells Business Ukraine magazine that part of the appeal lies in the opportunity to engage with fellow senior international executives. “Personally, I find serving on the Board of the Chamber to be a unique professional experience. It is a rare thing in the business world to have the opportunity to co-work with other corporate leaders. In our respective organizations, we are generally in the top position and communication tends to be along vertical lines. With the ACC, you have the chance to cooperate and interact directly with your peers. It is a valuable and productive process.”

Polish-born Mr. Chmielarski is no stranger to dramatic economic transformations. He joined McDonald’s in 1991 and was involved in the flagship US brand’s expansion during Poland’s emergence as the largest economy in the former Eastern Bloc of post-Communist nations. He believes today’s generation of post-Euromaidan Ukrainians can take inspiration from Poland’s progress, and sees a significant role for the ACC in the historic changes currently underway throughout Ukraine.

“It is absolutely crucial right now for the Ukrainian government to have a sounding board like the Chamber which can assist them in the implementation of different laws and regulations,” he says. “Ukraine has decided to take the first steps of what will be many more to come along the road towards integration with the European Union. In a wider context, the country is also now moving towards a more Western-style economy. We are logical partners in this process. The ACC membership is interested in Ukraine’s success because we depend on it for the success of our individual companies. The better Ukraine does as an economy, the better it will be for our members and for the Chamber as an organization. There is a clear common goal here. It is not a zero sum game. On the contrary, we can work together to move the country forward.”

Mr. Chmielarski sees the diversity of the American Chamber of Commerce in Ukraine as one of the organization’s greatest assets. While he readily acknowledges the importance of close ties to the US Embassy, the international AmCham network, and various government bodies in Washington DC itself, he says that the international mix within the Ukrainian branch of the Chamber helps provide a wealth of perspectives and brings the obvious advantages of pooled experience. “We are a very multinational organization representing companies from 50 different nations,” he says. “This is also something you will also see in the composition of the ACC Board of Directors, where I have served alongside colleagues from France, Turkey, Germany, Canada and numerous other countries. This diversity allows us to identify the global best practices in any given field. We are able to see what works best and then apply the lessons of other markets to Ukraine, while adjusting and adapting to local conditions as required.”

This diversity also extends to the individual CVs of ACC member company executives.  Mr. Chmielarski points out that many are veteran expatriate professionals with considerable experience in a range of emerging markets around the world. This adds value to the insights the ACC can provide as it seeks to support the government in efforts to build a better business environment.

Exports as an Economic Engine

Many analysts cite Poland as a model for Ukraine’s current economic reform agenda and point to the Polish success story of the past twenty-five years as an indication of what Ukraine can achieve given the right policy mix. As a participant in Poland’s post-Communist economic renaissance, Mr. Chmielarski argues that in some senses, Ukraine is actually in a better position today than Poland was in the early 1990s. “We had an economy in the grip of skyrocketing inflation,” he recalls. “There was no international investment and virtually no export market to speak of.” He sees increasing exports as one of the few short- to medium-term factors capable of driving Ukraine’s own economic miracle, given the relatively low purchasing power of domestic consumers and the attractive labor costs the country boasts. To help make this happen, he says the Chamber needs to focus on working with the government to create a more competitive domestic business climate capable of attracting international investors looking to use the country as a base for exports. “There is a lot to be optimistic about for Ukrainian businesses, especially with the easier access to EU markets that the country now enjoys,” he says. “Now is the right time to start exporting more. Ukraine currently exports very little compared to the size of the country. Exports are a way to restart the economic engine and fuel growth, just as they have traditionally been for countries like South Korea and China.”

In order to achieve this, Ukraine must do a better job of selling itself. The international struggle for limited amounts of available FDI is fiercer than ever, and Mr. Chmielarski believes Ukraine could be doing much more to attract investor attention. “Ukraine needs far more FDI than many of the nations it is competing against. It desperately needs to build up a competitive edge and must work much harder to attract international investment,” he says. “The Chamber can help Ukraine do a better job of this. At present, the country is losing out too often, despite enjoying a lot of theoretical advantages.”

Despite these shortcomings, Mr. Chmielarski remains bullish about the country’s economic development. Much of this confidence is rooted in the strong fundamentals in place, including close geographical location to EU markets, resource wealth, a large domestic market, and enviable human resources. “This country has so much to offer but in my opinion the single strongest asset is the people, who are inventive, creative, hardworking and professional,” he says. “Ever since my arrival at McDonald’s in Ukraine, I have been amazed by the quality of the personnel we have working at every level of the company. The biggest threat facing Ukraine today is the risk of losing these people by failing to meet their expectations for change and a better life. We must make sure this doesn’t happen.”