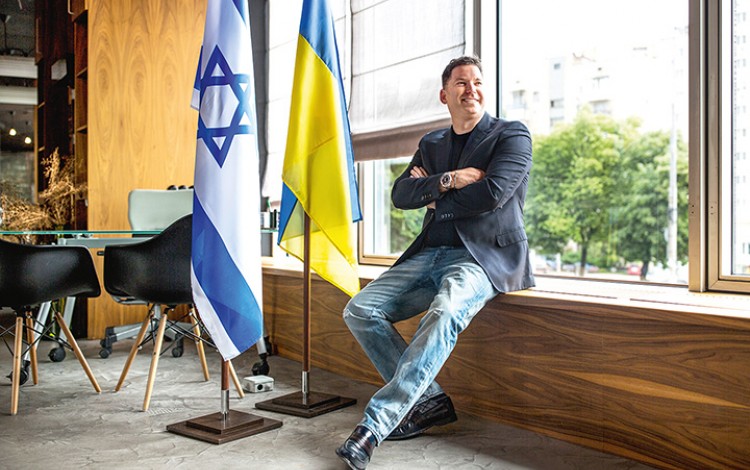 About the interviewee: Ari Schwartz believes the Ukrainian real estate sector is already firmly on the road to recovery and says he regularly encourages international colleagues to enter the market
Business Ukraine magazine

When Israeli real estate developer Seven Hills first entered the Ukrainian market in 2005, the company was one of many international developers attracted by the exciting prospect of post-Orange Revolution Ukraine. Eleven years later, Seven Hills is among the few remaining global companies still active on the Ukrainian real estate market. Ari Schwartz, the CEO of the Seven Hills Group of Companies in Ukraine, puts this longevity down to sound foundations and a long-term approach to doing business in Ukraine. “There was a tangible boom town spirit throughout Ukraine in 2005. Everyone was entering the market hoping to make quick profits, but thanks to our international experience we knew not to expect fast money,” he says. Instead, Seven Hills spent an initial two-year period analyzing the Ukrainian real estate market and producing forecasts aimed at anticipating the likely needs of the market over the coming decade. The result was the company’s flagship Park Avenue VIP residential complex in Kyiv, which is now nearing completion.

Construction at the Park Avenue site began in 2007 and has continued uninterrupted ever since, despite intervening global financial meltdowns, a Ukrainian revolution, and hybrid war with Russia. “We did not stop construction for a single day, even at the height of the political crisis in early 2014,” says Schwartz. “We place great value on keeping to our commitments. If we brought construction to a halt because of revolution or war, it would have meant sending over one thousand people home. As a company operating in Ukraine, we have obligations to our Ukrainian clients and employees.”

Having Israeli roots has certainly helped Seven Hills executives to understand the challenges of operating in today’s Ukrainian real estate market. Schwartz says there has been no discussion over the future of the company’s Ukrainian operations despite the instability of the past few years. On the contrary, the Israeli experience of prospering in difficult circumstances has helped to maintain a sense of optimism over the long-term future of the Ukrainian market. “As an Israeli company, we know what war is. We know how conflict can affect public morale and everyday life. We have lived in this context for decades. Nevertheless, today’s Israel is one of the top real estate destinations in the world with large inflows of international investment. We see Ukraine in the same context. If you look at the bigger picture, Ukraine remains one of the most attractive markets in Eastern Europe if not Europe as a whole.”

Construction work at the Park Avenue VIP residential complex is scheduled to finish in 2018. When complete, the complex will feature around 1350 individual apartments. Schwartz says sales have been steady over the past nine years and have remained strong during the turbulence of the post-Maidan environment. Over 95% of the complex’s 980 completed apartments have already been sold despite an unwillingness to engage in the kind of price dumping practices evident elsewhere on the Kyiv residential real estate market. These solid sales have given rise to an understandable sense of confidence regarding the future of residential real estate in Ukraine. Schwartz says he thinks the Ukrainian market actually bottomed out in early-to-mid 2014, and has been in slow but steady recovery mode ever since. He sees 2017 as a potential breakthrough year for the Ukrainian economy in general, and is already plotting his next foray into the residential market. “Things are still far from easy but there is more and more evidence that the market is on the up,” he reflects. “It takes time to get back on track after the kind of shocks Ukraine has experienced recently, but I expect we will see a lot more international investment coming into the country next year. I would encourage additional international real estate developers to consider entering the Ukrainian market and often speak with industry colleagues around the world about the opportunities Ukraine represents.”