MADE IN UKRAINE: Ukrainian IT company pioneers digital dining with smart tables 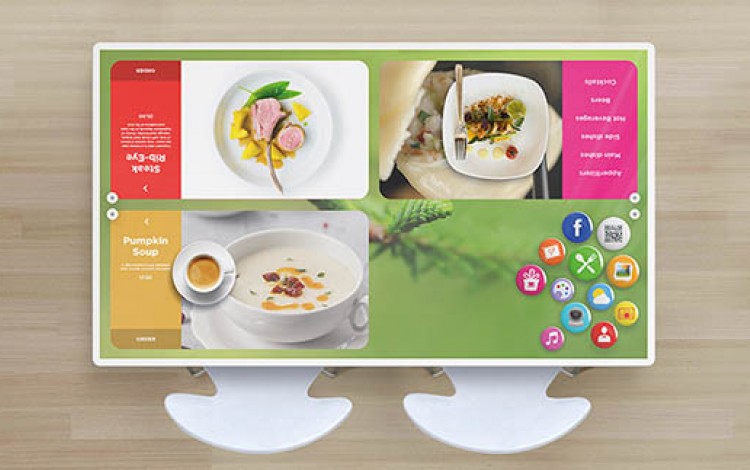 Dining in the digital age: smart tables designed in Ukraine by Kodisoft are attracting international attention and helping to put Ukrainian IT innovation on the global map
Business Ukraine magazine

A Ukrainian IT company has developed interactive restaurant tables that bring all the digital advantages of the smartphone era to the dining industry. Kodisoft’s Interactive Restaurant Technology is already proving popular in cutting-edge destinations such as Dubai and Abu Dhabi. These Ukrainian ‘smart tables’ are now set to expand into the wider international restaurant industry and could eventually serve as a flagship product for Ukraine’s IT industry.

Ukraine’s IT sector has emerged over the past two years as the great hope for the country’s post-Euromaidan economic recovery. The IT sector already accounts for around 3% of Ukrainian GDP, and this figure is widely expected to rise to at least 10% within the next five to ten years. This impressive growth is attracting attention throughout the international IT sector, but Ukraine has yet to produce a signature product capable of showcasing the country’s talents to global audiences in the way that Skype served to announce Estonia’s IT excellence to the outside world.

Ukrainian IT company Kodisoft hopes its Interactive Restaurant Technology tables can become exactly this kind of breakthrough product. The company’s smart tables certainly tick all the right boxes – they are aimed at mass market audiences and have the potential to become everyday items, but are also innovative and original enough to capture the imagination. The tables function like giant tablets with the ability to do everything from accessing social media and taking selfies to more directly relevant functions such as translating menu items, placing restaurant orders and checking out the nutritional value of the food and drinks on offer. Crucially, they are also designed to be tough enough to withstand occasional spills, splashes, and even exuberant table-dancing antics.

From Dubai to Toronto

These Ukraine-made smart tables are already in use in four restaurants internationally: Oshi Asian Restaurant in Cyprus, Ebony in Dubai, Neo in Russia, and the appropriated named iCafe in Abu Dhabi. Kodisoft executives say this is just the tip of the iceberg. The tables are certainly capable of turning heads – they were among the star turns at the recent Canada-Ukraine Business Forum in Toronto, where Canadian Prime Minister Justin Trudeau was among the attendees who enjoyed spending time playing with a display model.

Kodisoft founder and CEO Dmytro Kostyk spoke to Business Ukraine magazine about his company’s smart tables and explained the role his passion for the restaurant business played in the development of this potentially global product. “I was always interested in creating useful inventions,” he says. “I made my first million while still a university undergraduate, when I developed Intellect Device Bluetooth Marketing (IDBM), an instrument for Bluetooth marketing which allows users to share information for free to portable devices with Bluetooth modems. The success of IDBM opened up international markets for us. I then decided to combine my twin loves for technology and for the restaurant industry in a new product. I noticed that restaurants generally tend to use a lot of paper for menus, table coverings, bills, and so forth. The management of all these paper elements seemed to be quite random in many restaurants, with service staff misplacing things and menus becoming dirty and greasy. I wanted to streamline the industry by creating a ‘magic’ table. Once the idea has begun to take shape, my team then developed our Interactive Restaurant Technology. The idea is simple – to create an interactive restaurant experience where the menu is on the screen along with a range of games and other entertainment options. Our tables also allow guests to read the news, share photos, communicate with other tables, and pay for their meals online. You can even watch your order being prepared in the restaurant kitchen via special cameras installed in the venue.”

Kostyk is bullish about global demand for his tables – especially following the warm reception the product received at the June Canada-Ukraine Business Forum in Toronto. “PM Justin Trudeau loved our tables and spent quite a lot of time discovering how they work,” he says. “Every day while I was in Canada, I had five or six meetings with journalists, restaurant owners and politicians – all of them are very interested in our technology.”

Much more than an IT outsourcing outpost

With the overwhelming majority of international investment into the Ukrainian IT industry currently focused on outsourcing activities, initiatives like Kostyk’s smart tables serve as a useful reminder that Ukraine’s IT talent is capable of much more than offering cost-effective solutions to coding challenges for multinationals.

The recently released 2016 edition of the ‘Deal Book of Ukraine’ - produced by Ukraine Digital News and AVentures Capital - covers the venture and startup industries and offers cause for further optimism. This year’s survey highlighted impressive growth in the level of international investment into the Ukrainian tech sector. The report identified the acquisition of Ukrainian startups by a number of major global tech sector players as one of the most striking developments of the past 12 months. Headliner deals include Snapchat’s USD 150 million acquisition of Looksery, a Ukraine-originated startup that developed augmented reality filters for selfies. Other eye-catching international acquisitions in 2015 include those of Ericpol by Ericsson, Maxymiser by Oracle, and Jeapie by Canada’s Mobify.

“Amid the country’s current political and economic woes, the Ukrainian startup and venture scene is experiencing an astonishing revival,” notes Adrien Henni, chief editor at Ukrainian Digital News and co-author of the ‘Deal Book of Ukraine’. “We are witnessing the emergence of a new generation of globally-oriented startups, the entry of new classes of investors into the market, and the blossoming of community initiatives – from brand-new industry associations, to educational institutions and media platforms.”

The high media profile and prominent public positioning of products like Kodisoft’s interactive restaurant tables will help to generate further interest in Ukraine’s IT innovators. The biggest challenge may now be to persuade more and more of the country’s IT professionals to leave the comfort zone of lucrative outsourcing employment in order to gamble on the potentially far more profitable and exciting world of startup speculation. As Ukraine’s global IT reputation grows, there is unlikely to be any shortage of international attention.

knowledge economy Made in Ukraine Ukrainian innovation Ukrainian IT industry