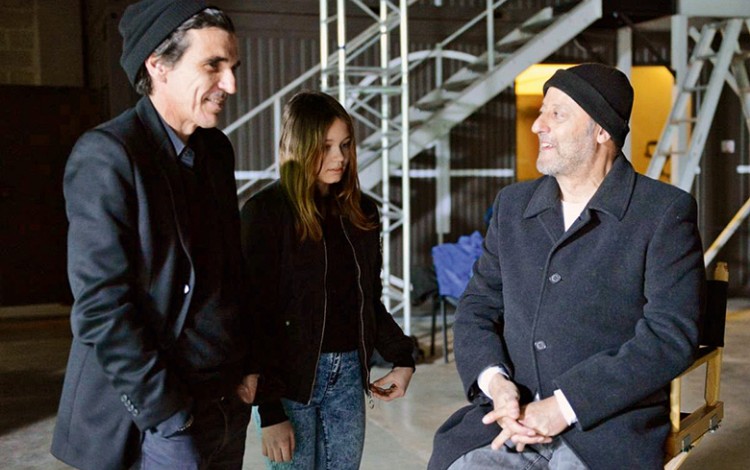 About the interviewee: Olias Barco is a film director and producer. He is pictured here in action alongside the stars of his film “Polina” Jean Reno and Ukraine’s Polina Pechenenko
Business Ukraine magazine

Ukraine has recently emerged as a popular destination for international music videos and adverts, prompting a flurry of debate over the country’s potential as a filming location. One Belgium-based filmmaker wants to go even further and has visions of transforming Ukraine into a regional movie industry powerhouse capable of attracting big budget Hollywood blockbusters.

Olias Barco has every reason to be optimistic about Ukraine’s Hollywood credentials. He has already completed shooting of “Polina”, a family fantasy film that is billed as Ukraine’s first international movie, and is one of the driving forces behind “The Last Step”, an action thriller starring Jean Reno of “Leon” fame that is set to begin filming in the Ukrainian Carpathians in the final weeks of 2017. This new Jean Reno vehicle is a potentially important stepping-stone for Ukraine’s fledgling international film industry. It is a co-production bringing together France’s Lagardere Studio and East West Productions, the production company established by Mr. Barco and his partner Oleg German in order to further the Belgian’s ambitious plans to establish Ukraine on the international filmmaking map. Chatting over coffee at the East West Productions offices in Kyiv’s elegant riverside Podil district, Mr. Barco shares his obvious excitement about the coming filming of “The Last Step”. “This is a first for Ukraine and it could really open the door,” he says. “A movie like this can lay the foundations for the future and help to attract the global film industry to Ukraine.”

From Odesa to Kyiv

His own first-hand experiences in Ukraine have convinced Mr. Barco that the country can make a name for itself in the movie business. Ukraine first appeared on the filmmaker’s radar in 2011 when his acclaimed black comedy “Kill Me Please” won the Best Director prize at the Odessa International Film Festival. The following year, he accepted an invitation to serve on the festival jury and returned to the Ukrainian Black Sea. Spending time in Odesa proved an engaging experience for Mr. Barco, and he subsequently began spending his summer holidays in the Carpathian Mountains with his new Ukrainian friends.

However, it was not until 2015 that the filmmaker hit on the idea of actually making movies in Ukraine. At the time, he had spent the previous three years fruitlessly searching for the right place to film a fantasy movie about a young girl transported though the silver screen into a world of adventure. Eventually, he decided to give Kyiv a try. This gamble resulted in “Polina”, a feature film currently in post-production that was shot entirely in the Ukrainian capital at the Film UA studios. The film features an international cast but the crew were all Ukrainian except for Director of Photography Thierry Arbogast, a veteran of numerous collaborations with Luc Besson. Mr. Barco raves about the quality of the Ukrainian team who worked with him on “Polina” in Kyiv. “As a filmmaker, you can do whatever you want here thanks to the professionalism of the crews. The result is Hollywood standards at budget prices.”

The Ukrainian authorities appear to share Mr. Barco’s vision for the country as a globally competitive movie location. This has helped him secure the support of the Ukrainian State Film Agency for both “Polina” and the upcoming “The Last Step”. He names Ukrainian State Film Agency head Philip Illienko as one of his key collaborators, and is generous in his praise for the Ministry of Culture, which he says has been extremely accommodating. Mr. Barco believes new Ukrainian legislation offering tax rebates for film production will help make Ukraine more attractive to international production companies once it comes into force in 2018, and says this move reflects the country’s general readiness to sell itself on the global marketplace. “The officials I meet have the energy to make it happen,” he says. “Everything is coming together to make the country genuinely competitive against the likes of Bulgaria and Romania.”

From Soviet Chic to Perfect Palaces

In addition to low costs, tax incentives and skilled film crews, Mr. Barco identifies the sheer range of locations on offer as one of Ukraine’s greatest advantages. “You can find everything here and unlike in many other European countries, it is usually possible to arrange a shoot without too much trouble. Ukraine has castles, palaces, iconic Soviet architecture, all manner of urban landscapes and stunning nature. You can film on the beach or up in the mountains.”

He will be spending plenty of time in Ukraine’s mountains over the coming months, working with Jean Reno as filming of “The Last Step” gets underway. Veteran British movie company Goldcrest Films has already concluded a deal to sell the worldwide rights to the action thriller, suggesting that Mr. Barco may well be onto something. However, his dream of bringing the international film industry to Ukraine will not come true overnight and will require the kind of faith in against-all-odds success stories more commonly found in the Hollywood blockbusters he hopes to entice.