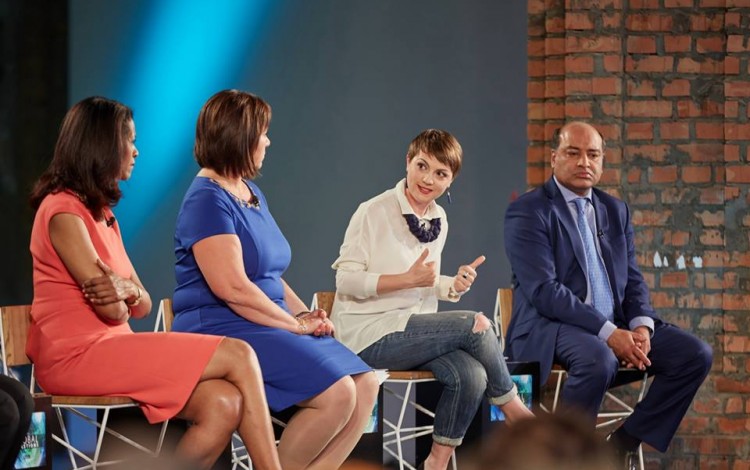 The concept of a free press has struggled to take root in the post-Soviet space, but ever since the 2004 Orange Revolution, Ukraine has emerged among its ex-Soviet peers as a regional leader in media pluralism. This trend has gained considerable pace over the past two years of revolution and conflict in Ukraine, with the rise of a new generation of Ukrainian media outlets promoting recognizably international standards of journalism. The flagship brand in this next generation of Ukrainian media start-ups is undoubtedly Hromadske.

Established in spring 2013, Hromadske began broadcasting in November 2013 and quickly gained an online audience via its coverage of the Euromaidan protests in Kyiv. A digital start-up channel with big ambitions, Hromadske currently produces a range of Ukrainian, Russian and English-language content. Business Ukraine magazine spoke to Nataliya Gumenyuk, the Head of Hromadske.tv and Hromadske International, about the multiple challenges posed by the Kremlin information war, continued Ukrainian oligarchic influence, and the emotional pressures of remaining objective in a time of national crisis.

Hromadske is widely seen as a symbol of the new media that has emerged in Ukraine since the beginning of the Euromaidan protests in 2013. How would you characterize the Hromadske philosophy?

The Hromadske mission is to create an information environment that can support the development of individuals and society as a whole. We aim to build a transparent and sustainable organization guided by the principles of trust, commitment, responsibility and professionalism.

How has the emergence of Hromadske impacted on the editorial content of Ukraine’s more well-established mainstream TV channels?

Hromadske has had a major influence, both in terms of popularizing the concept of live streaming (rarely seen on Ukrainian mainstream TV before 2014), and in promoting the highest editorial standards. The existence of Hromadske also demonstrated the importance of socially responsible media, which in turn helped drive the adoption of Ukraine’s new law on public broadcasting.

Is it accurate to talk about a new era in Ukrainian media since the advent of the Euromaidan Revolution?

I would not call it an entirely new era, as Ukraine had experienced years of ‘random freedom’ prior to the Euromaidan Revolution. Nevertheless, it is true that the media situation has improved significantly. However, Ukraine’s oligarch-owned commercial media outlets still refuse to use the opportunities of today’s greater press freedoms, and instead continue to serve their masters rather than their audience.

Since late 2013, the Ukrainian media has had to contend with a sophisticated and extensive Russian information war. What balance do you attempt to strike between developing your own narratives and countering Kremlin disinformation?

I do not think in terms creating our own narratives and countering disinformation. Our goal is to provide audiences with the best information we can, and to let them decide for themselves what is happening. The Kremlin information war seeks to demonstrate that objective information is a myth and all media outlets follow their own agenda. Confronted by this, the best thing serious journalists can do is to safeguard reality. Government bodies can do whatever they want, but it is especially important during wartime to have outlets that provide the population with objective information, allowing them to make their own judgments.

Many analysts argue that the conflict in eastern Ukraine is primarily an information war generated by the Kremlin media. Is it possible for the Ukrainian media to adhere to internationally accepted standards of objectivity in such an environment of weaponized journalism?

I am always a bit puzzled by the use of the rather general term ‘Ukrainian media’. My opinion is that there is quality media and there is bad journalism. In today’s Ukraine we have both, much as they do in the US, the UK and in Russia.

Unfortunately, not all Ukrainian journalists are doing a good job. Any country’s media sector is a reflection of society as a whole, and Ukrainian society is obviously suffering from significant trauma. It is true to say that it is much harder for Ukrainian journalists to maintain a sense of distance from the war than it would be for US journalists reporting on American troops in Afghanistan or Iraq, for example. Almost every Ukrainian is directly involved. They may have friends or relatives involved in the fighting. They might know people who have had to flee their homes or those living in Crimea or the Donbas. It can be hard to stay sane. Despite these challenges, I think it is important to note that big stories from the conflict are usually first reported by the local media. In this regard, both Ukrainian photographers and reporters are doing a great job – although it is also true that some do not see any problem with including pop-patriotism in their coverage.

What kind of reactions have you had from viewers in the Russian Federation?

Many Russians followed our coverage of the Euromaidan protests. We understood from the beginning that our Russian audience was open to alternative sources of information other than the Kremlin. We do not want to change the minds of those who are ready to believe anything the Kremlin says - we just want to explain what is happening here for people who genuinely want to know more.

Hromadske International is still very young – it will mark its first anniversary at the end of October. Every day we produce at least one report with English subtitles, while our extremely small English-language newsroom team manages to provide breaking news coverage via Facebook and Twitter. We currently have funding until the end of 2015, but we are sure we will not stop there.

About the interviewee: Nataliya Gumenyuk is the Head of Hromadske.tv and Hromadske International