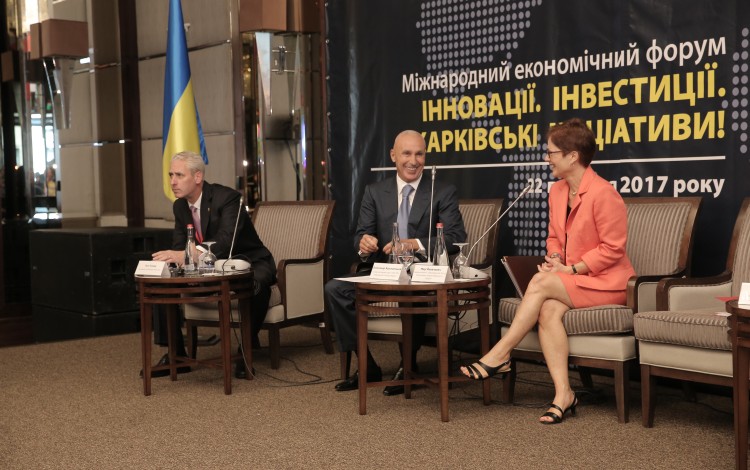 Mr. Yaroslavsky was on hand to greet guests to the forum and expressed his satisfaction at the record attendance from international participants. While welcoming the growing international investor interest in the Kharkiv region, he shared his believe that Kharkiv businesses must play a key role in stimulating international interest by setting a personal example via their own investments into the local economy. “When you invest yourself, it creates the best motivation for partners and colleagues to follow suit,” he commented. “My DCH Group has invested over USD one billion into the Kharkiv economy over the past five years. These projects have included an airport, a joint venture with the state, and a public-private partnership. The list also features the Premier Palace Hotel, the city’s main football stadium, sports facilities, shopping malls and the Kharkiv Tractor Factory. We intend to continue expanding our investments.” Mr. Yaroslavsky invited international partners to consider investing into the city’s production and manufacturing industry, including the Kharkiv Tractor Factory, while stressing that DCH Group has a number of additional investment proposals ready for consideration.

Kharkiv Regional Administration Head Yulia Svitlychna pointed out that this year’s forum attracted record international participation including 30 delegations and 15 ambassadors. In total, the event drew around 500 participants. “This is the most powerful economic forum in Eastern Ukraine and it is something we have been preparing for throughout the year,” she observed. “It is an opportunity for the international and Kharkiv business communities to come to together and shape the development of the regional and national economies by exploring the most promising directions for further growth and cooperation.” She said that agreements worth approximately USD 75 million were expected to be inked on the sidelines of the forum, along with at least seven cooperation memorandums.

Among the international officials in attendance was US Ambassador to Ukraine Marie Yovanovitch. Ambassador Yovanovitch stressed the appeal of the Kharkiv region and pointed to the high-level status of her delegation as evidence of the important attached to the strategically placed eastern Ukrainian city. “We hope for further fruitful cooperation with the Kharkiv region,” she commented. “I have come to this event together with members of the US House of Representatives as well as members of the US business community.”