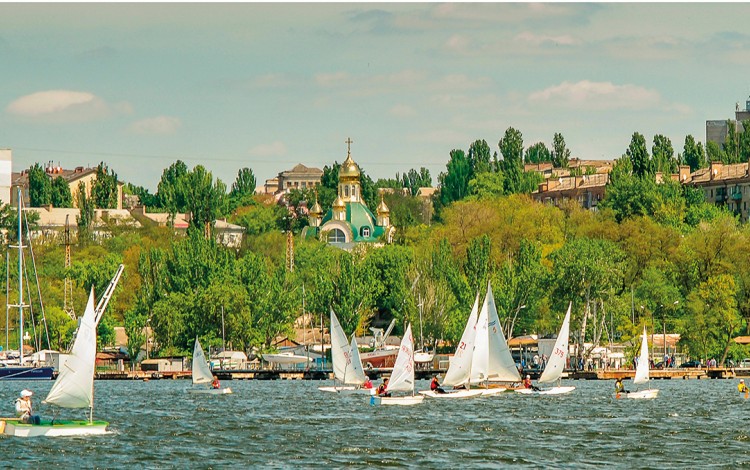 Despite being a major shipbuilding center and former headquarters of Imperial Russia’s Black Sea Fleet, Mykolaiv was a closed city until 1993 and remained largely off the international radar. Today it is the ninth biggest city in Ukraine with a population of approximately 500,000 and boasts a record as one of the most attractive destinations in the country for international investment.

Mykolaiv has a number of strategic advantages. Three major international transport corridors pass through the region, making Mykolaiv a key hub for commerce between Europe and Asia. The city has a powerful export-oriented industrial sector with particular potential for further growth in the agro-industrial and energy sectors. The Mykolaiv region is rich in natural resources such as fertile soils, granite deposits, and raw materials for cement production.

However, the citizens of Mykolaiv remain the city’s most important resource. While the municipal authorities work to bring further investment to Mykolaiv, local activists are engaged in transformational projects like the Mykolaiv Development Agency (MDA), a multi-purpose institution that serves as a chain between local governance and Mykolaiv citizens. “When we started our cooperation with the Mykolaiv Development Agency, we identified three main goals to be achieved: engagement of citizens, co-financing, and real impact on the lives of ordinary people,” says Jaroslawa Johnson, President and CEO of the Western NIS Enterprise Fund, one of the first donors to support the newly created institution.

Mykolaiv Development Agency focuses on addressing municipal issues and empowering local communities to take an active part in initiating change. It is a pilot project with the potential to serve as a role model for other Ukrainian cities. MDA is a young organization in every sense. Thirty-three year old Chernivtsi native Vasyl Goshovskyy leads a locally recruited team of 15 with an average age of just 27. They are creative in their approaches and benefit from a lack of the archaic procedures that can stifle initiative within existing municipal structures. This has led to a “clash of generations” and created many bumps along the road to reform of local government, but advocates believe it is the only way to achieve the necessary transition to modern governance practices at the municipal level.

Local engagement is a crucial element of the MDA strategy to promote transformation. With the Mykolaiv population impatient to see the political slogans of the past three post-Maidan years translated into concrete results, quick wins and community interaction are vital. The MDA has focused on two projects designed to involve the public and provide opportunities for tangible change.

The first initiative involved the redevelopment of Mykolaiv’s main square and central Soborna Street, which serve as the key shopping and strolling areas for local residents. MDA brought together over 2000 residents and experts to discuss the redevelopment concept and identify priorities. Complaints focused on the proliferation of small kiosks and outdoor advertisements. Many participants grumbled that the chaotic growth of summer terraces was creating obstructions for pedestrians. These issues are now on the municipal agenda.

The second initiative is the launch of an NGO resource center that has already consulted around 100 civil society groups and activists in the first four months of its existence. As a result, 15 projects focused on art, ecology, urbanism, and gender issues will receive co-financing from the local budget totaling about UAH 500,000. Fourteen further projects are receiving MDA support.

A further injection of fresh ideas came in autumn 2016 with the opening of the Ukrainian Leadership Academy (ULA) Mykolaiv. In addition to their studies, 37 young adults from all regions of Ukraine are now helping to transform Mykolaiv’s Korabelnyy district. In cooperation with the Municipal Transport Department, they have installed QR codes in trolleybuses, giving passengers access to world literature in Ukrainian. A bicycle festival organized by ULA students drew over 700 participants, while they also volunteer at local schools and animal shelters.

“The main task of local government should not be limited to making the city richer financially. It must include creating comfortable lives for citizens based on trust and opportunities for professional and personal growth,” offers Ms. Johnson, who teaches English literature to ULA students and visits Mykolaiv at least once a month. She believes better transport connections could give the city a further boost. “Mykolaiv has made considerable progress in the last few years, but there is still room for improvement. Mykolaiv needs to create a convenient form of transportation to allow both investors and opinion leaders to visit. With improved connections to the rest of Ukraine, Mykolaiv will be able to achieve a tremendous impact for the city and its citizens.”

About the author: Iryna Ozymok is LED Program Manager at the Western NIS Enterprise Fund