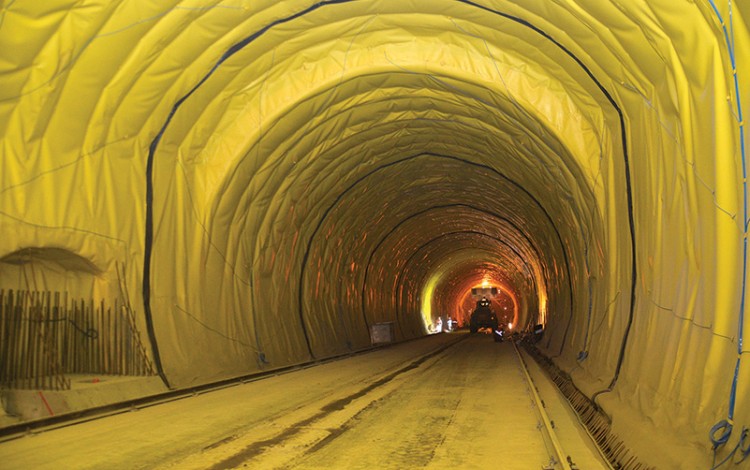 Waterproofing work underway inside the Beskyd Tunnel using Sika technologies. The Beskyd Tunnel is one of a host of major Ukrainian infrastructure and construction projects featuring the participation of Swiss-based Sika
Business Ukraine magazine

The May 2018 opening of the Beskyd Tunnel in western Ukraine was widely hailed as a historic breakthrough that brought Ukraine closer to the European Union. The 1822m tunnel was among the largest and most strategically important infrastructure projects undertaken in Ukraine in recent years. It was also one of the many to feature the involvement of Swiss-based chemical and construction industry giant Sika.

Sika Ukraine, the local branch of Sika Group, provided waterproofing solutions for the Beskyd Tunnel project, a particularly fitting role given Switzerland’s longstanding tunnel construction expertize and Sika’s own company history, which began in 1910 with the invention of a waterproofing agent named Sika-1 designed to address the problem of waterproofing tunnels. “The Beskyd Tunnel was a very symbolic project for us,” says Sika Ukraine General Manager Aleksandr Panchenko. “We actually won the tender for the tunnel in 2016 at the same time that the world’s longest railway tunnel, the Gotthard Base Tunnel, was being unveiled in Switzerland.” While the Beskyd Tunnel strengthened Ukraine’s connections to the EU in a very direct and concrete manner, many of the other Ukrainian projects Sika has contributed to are also very much part of the country’s transition towards contemporary European standards.

Aleksandr Panchenko has been with Sika since the very beginning of the company’s activity in Ukraine. Beginning in 1998, he initially served as the official representative of Sika Poland in the country before eventually overseeing the establishment of a separate Ukrainian branch in 2004. He calls Sika “a full range supplier of construction materials, from basement to roofing and at all stages of the construction process and renovation.” The company’s activities cover everything from concrete and waterproofing to refurbishing, sealing and bonding, roofing and flooring.

Over the years, Sika has been involved in many of Ukraine’s most high profile and well-known construction projects. The list includes Boryspil and Lviv international airports, the colossal shelter to enclose reactor four at the Chornobyl Nuclear Power Station, the iconic glass domes of Maidan Nezolezhosti (Independence Square) in central Kyiv, the Ukrainian capital’s Ocean Plaza shopping mall and downtown cycling stadium, cooling towers of heating stations and virtually all the major football stadiums in Ukraine including the Olympic Stadium. According to Panchenko’s estimate, 99% of the country’s modern trams, trolleybuses and buses use Sika technologies, while the company has participated in the construction and refurbishment of over 1000 bridges throughout Ukraine. He jokes that Sika is the most visible yet invisible company in the country. “Nobody sees us but we are absolutely everywhere in Ukraine.” As he runs through the long list of Sika activities, Panchenko says it is impossible to identify any single project as being particularly important or significant for the company’s development in Ukraine, arguing instead that they have all played a role in the process. “It is like asking a mother to choose their favorite child. For us, all projects are equally important.”

The company’s bulging portfolio has helped the Sika presence in Ukraine to grow from just seven employees back in 2004 to today’s team of 40 staff. Employees regularly undergo training in Switzerland and a number of other European countries, with training trips generally lasting for three to four days and taking place several times a year. The company currently has three offices in Ukraine, with the Kyiv headquarters alongside regional representative offices in Lviv and Dnipro. Growth has not always been entirely steady. The turbulence of the 2008 financial crisis and the Russian attack of 2014 both jolted Sika’s otherwise impressive Ukrainian progress. However, the past few years have witnessed a return to stable gains, with the company’s revenues in Ukraine climbing by 15%-17% annually since 2016.

Panchenko says Sika Ukraine’s connection to Switzerland goes beyond the immediate advantages of technical knowhow. He believes this Swiss association actually helps shape the way the company does business in Ukraine. “We try to bring a Swiss philosophy to everything we do. Within our company, this concept of “Swissness” is evident in hundreds of different little details. You can see it in terms of good timekeeping and punctuality. It helps guide our future planning and encourages us to analyze and learn from our mistakes. It means embracing the idea of perpetual education and training, together with developing and maintaining relationships. Perhaps more than anything else, it is about building trust.”