Antonov aircraft are Ukraine’s most recognizable

exports and can be found all over the world 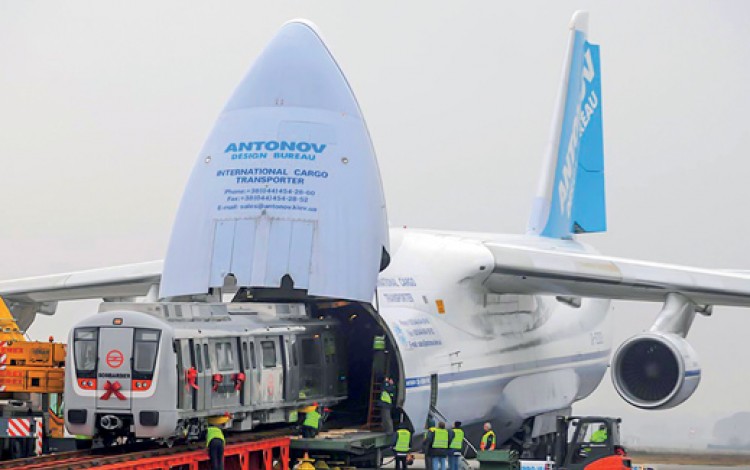 In terms of commercial brand names, noth­ing else which contemporary Ukraine has to offer can realistically hope to compete with the global recognition enjoyed by the Antonov aviation brand, which is known in practically every corner of the world. Throughout its sixty-nine year history, An­tonov has produced a total of more than 22,000 aircrcaft of all shapes and sizes, from small passenger planes to giant car­go carriers. Antonov planes are currently in service in 78 countries. The Ukrainian aircraft producer’s main focuses are trans­port planes, regional passenger planes and special purpose aircraft. In terms of sheer size, Antonov may not be in quite the same league as global aviation industry leaders such as Boeing and Airbus, but it is none­theless one of relatively few genuinely international players on today’s aircraft market, and a brand name which places Ukraine firmly among the thinly populated ranks of the aviation elite.

The Antonov story begins in the immedi­ate post-WWII years. The company was es­tablished in 1946, and was initially based in Novosibirsk, before being transferred to Kyiv in 1952. Antonov has been based in the Ukrainian capital city ever since, and continues to occupy a vast plot just off Vic­tory Prospekt close to Kyiv’s Svyatoshyna region. The company takes its name from initial chief Oleg Antonov, the eminent aircraft designer who first built his repu­tation as an aviation expert by designing gliders in the 1930s. During WWII, Oleg Antonov played a key role in the creation of multi-seat landing gliders as well as ‘winged tanks’ for deployment direct to the battlefield. He spent much of that pe­riod developing the Yak planes which were mass-produced for use by the Red Army Air Force during the conflict with Nazi Germany.

Following the defeat of Hitler and the end of WWII, Antonov requested the opportu­nity to work independently and was given control of his own design and research bu­reau, which would soon move to Kyiv and take on his name. Initial Antonov planes, including the legendarily versatile An-2 biplane, were functional and practical aircraft whose designs were very much keeping with the proletarian principles fa­voured by the Soviet authorities. In 1956, Antonov Design Bureau created the An-8 military transport - the first aircraft of its kind in the Soviet Union. In the 1950s, the company experienced a major break­through when it developed the An-12 car­go plane, which served both in commer­cial airlines and in the Air Forces of many countries. Many An-12s remain in service around the world to this day. In 1965 An­tonov’s innovative An-22, the first wide­body transporter in the world, won major plaudits when it made its international de­but at the Paris Air Show.

The 1980s was to prove the era of giant Antonov transports, which saw the devel­opment of the massive An-124 ‘Ruslan’ and its (very) big brother, the An-225 ‘Mriya’. These two unfeasibly large models earned Antonov considerable international kudos and won the company increased credibility as a producer of groundbreaking and tech­nically innovative aircraft which pushed the boundaries of aviation technology. The mass-produced Ruslan and the one-off Mriya (the name means ‘dream’ in Ukrai­nian) remain respectively the number two and number one largest cargo transport planes in the world, guaranteeing them a steady stream of international customers eager to book them in order to transfer particularly large and awkward air freight cargos across the globe. These two cargo kings have proved particularly popular as military transport planes. Since 2006, they have been used for strategic airlift tasked within the NATO SALIS programme.

Antonov’s An-124 and An-225 giants are undoubtedly spectacular flagships for the Antonov fleet, but they are vastly outnum­bered by the workhorses of the Antonov production lines, which continue to swarm the global aviation market. Thousands of Antonov passenger and cargo planes remain in service all over the world. An­tonov’s production output of over 22,000 aircraft is a staggering total which com­fortably makes it one of the most prolific producers in the history of world aviation. Today, the Ukrainian aviation company is probably best known for its niche cargo transporters, which remain globally com­petitive. Over the past 25 years, Antonov has managed to weather the economic challenges of the post-Soviet period and maintain its position as the leading avia­tion enterprise in independent Ukraine. As it prepares to mark its seventieth an­niversary, Antonov is firmly installed as Ukraine’s biggest brand name, in every sense of the word.