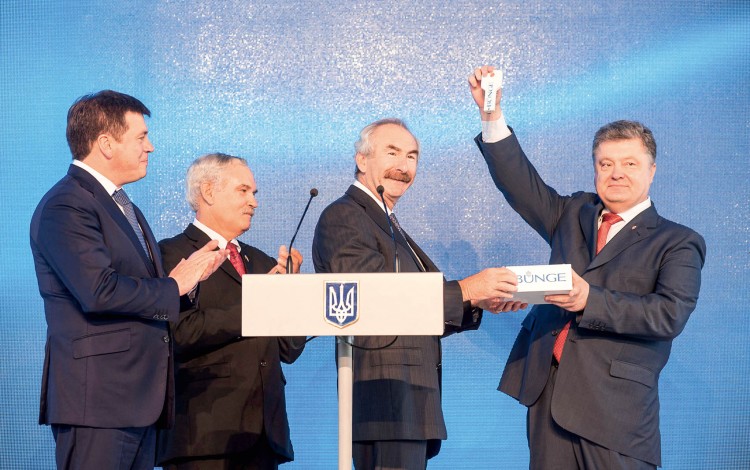 Ukraine’s agricultural sector received a significant boost in June with the unveiling of a major new industrial and transshipping complex in the Black Sea port city of Mykolaiv. The complex, valued at USD 180 million, is part of a USD 280 million investment into the development of the port by agribusiness giant Bunge – making it one of the largest international investments in the Ukrainian agricultural sector to date.

The new facility will help to raise the handling capacity at Mykolaiv Sea Port, which serves as one of the country’s main gateways for Ukrainian agricultural produce bound for international markets. It will allow for increased volumes while also facilitating a shift away from the direct export of commodities and towards the development of a variety of value-added agricultural products – a goal identified earlier this year by Ukraine’s Agrarian Policy Minister Taras Kutovyi as a key industry target for the agricultural superpower.

As well as providing a platform for the production of more complex agricultural products, the new Mykolaiv complex also offers a range of logistical advantages. It is located just 100 metres from the pier, making it the first project of its kind in Ukraine to boast such close proximity to the water. Mykolaiv Sea Port is already among Ukraine’s top ports in terms of grain management, with Bunge Ukraine handling more than one-third of the grain passing through the port. The opening of this new industrial and transshipping complex will further cement Mykolaiv’s importance to Ukraine’s agriculture sector and its role in the Black Sea region.

The presence of Ukrainian President Petro Poroshenko at the official opening ceremony of the complex on 15 June served to underline the national significance of the investment. Ukraine’s agriculture industry has been one of the best-performing sectors of the economy over the past two years, proving surprisingly robust amid the instability and armed conflict that have hit the country since the 2014 Euromaidan Revolution. While other sectors have struggled to cope with the challenging business climate, Ukrainian agricultural companies have succeeded in expanding their global market reach and consolidating the country’s position as a leading commodities exporter.

Last year, Ukraine ranked as the world’s number one exporter of sunflower oil, and was a leading grain exporter to key global markets such as China. This strong performance has helped generate crucial foreign currency revenues at a time when other mainstays of Ukraine’s export economy have been rocked by falling global commodities prices and domestic unrest that has seen much of the industrial heartlands in the east of the country cut off by fighting.

President Poroshenko lauded Bunge’s investment as an example of investor faith in Ukraine’s future economic development. “These are not just words,” commented the Ukrainian President. “This investment represents a vote for Ukraine. It acts as the best advertisement for the investment opportunities and attractiveness of the country.”

Sending a strong signal to the international investment community

Bunge’s commitment to the development Mykolaiv Sea Port dates back to 2011, when the company built a modern grain transhipment terminal that increased the country’s overall grain export capacity by three million tonnes per year. The addition of this new complex takes the company’s overall outlay to USD 280 million, but Bunge Ukraine’s Managing Director Dmitry Gorshunov hinted that there may be more to come. “Taking into consideration the success of both (Mykolaiv) projects, in the future we will consider further investment in areas beyond agribusiness infrastructure development,” he commented following the unveiling of the new complex.

The new Bunge complex at Mykolaiv Sea Port is one of the largest single international investments into the country’s economy in recent years. As a result, it has attracted significant amounts of domestic and international media attention. Andy Hunder, the President of the American Chamber of Commerce in Ukraine, said the investment highlighted the country’s vast potential, created opportunities for increased exports, and strengthened Ukraine’s brand abroad. “In times of doubt and uncertainty, Bunge’s decisiveness serves as a ray of hope for Ukraine,” commented Hunder, arguing that it will help to encourage other investors to seek Ukraine market entry opportunities. “The Bunge investment sends a very positive signal to international investors,” Hunder told Business Ukraine magazine. “It can inspire others to take a closer look at Ukraine, research available opportunities scrupulously and make financial commitments while the market is truly open and easy to enter.”