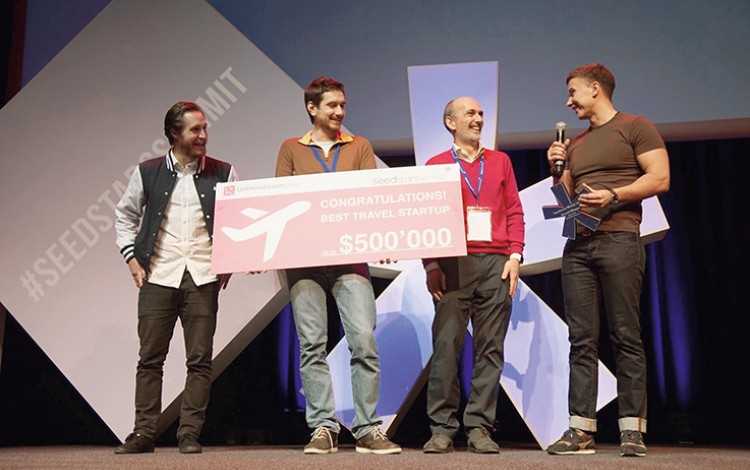 Where are you planning to spend this year’s summer holidays? As you surf the internet for ideas, there is a good chance you will find yourself using TRIPMYDREAM, a Ukrainian tourism website with global ambitions that recently won international recognition and secured a groundbreaking investment partnership with lastminute.com group. This breakthrough came at the annual Seedstars Summit in Lausanne, Switzerland – one of the world’ premier startup events – with TRIPMYDREAM named as Best Travel Startup.

Since winning this award, life has been hectic for the team behind the TRIPMYDREAM project. Co-founder Andrey Burenok says he has been interviewed by virtually every major Ukrainian media outlet. He has also found himself in demand as a guest lecturer at Ukrainian universities. The IT industry is very much in fashion in today’s Ukraine, and Burenok is the high-tech version of a designer label.

From corporate careerist to startup superstar

It hasn’t always been like this. Burenok’s personal journey is a stereotypical post-Soviet fairytale, beginning in sleepy Chernihiv at the turn of the millennium. When the 35-year-old entrepreneur first arrived in Kyiv as a young graduate, he was so poor he had to lodge in the suburban urban jungle on the outskirts of the Ukrainian capital, sharing an apartment with a babushka. He survived on noodles and scrimped on public transport, he recalls. Then came stints at Samsung, TNK-BP, and Swedish media group MTG. These roles presented Burenok with the possibility for considerable professional growth, and for a time he saw himself as the quintessential corporate careerist.

Burenok made the switch from the high-powered corporate world to the dynamic environment of internet startups around three years ago. As he explains it, he had long since recognized that every sphere of business activity was moving online and had begun to think about developing his own product. After hiring his current TRIPMYDREAMS business partner, Taras Polischuk, to work on internet solutions at MTG, Burenok’s broad desire to create a startup began to take concrete shape. “I realized that Taras was a genius and decided we had to do something together,” he recalls.

Burenok’s epiphany came while experiencing logistical problems during a skiing holiday in Italy in early 2013. A seasoned international traveler, he estimates that during his corporate career he was spending upwards of 200 days travelling around the world for both business and leisure. He knew the travel industry inside out, and was well aware of the shortcomings of the many existing online tourism platforms. The challenge was clear – to create a ‘one-stop-shop’ online product catering to the needs of seasoned travelers looking for maximum choice at minimum prices.

The result was TRIPMYDREAM, a sleek site that focuses on saving travelers time and money while also offering vacation inspiration. “Our lack of prior experience in the travel industry was actually an asset, because it allowed us to think outside of the box,” he offers. The business model involves engaging potential customers as early as possible in the process of booking a holiday, then claiming a commission from booking partners ranging from airlines and hotels to car rental and travel insurance companies.

The benefits of aiming high

The company’s first partner was global online tourism reservations giant Booking.com – a coup brought about after Burenok boldly approached the company’s CEO Darren Huston on professional networking platform LinkedIn. It proved a textbook example of social media’s ability to transcend borders and build business bridges, earning the Ukrainian startup a prestigious partnership and instantly positioning the new site as a potentially major player. “If you want to achieve something, just knock on the door,” says Burenok of his audacious Booking.com approach. “If you don’t try, you’ll never know if you had a chance.”

The company’s latest triumph in Switzerland will bring USD 500,000 in equity investment from Italian-owned lastminute.com group, but it is the added clout this collaboration provides that excites Burenok most. “We don’t need the money as much as we need the expertize,” he explains, recalling how he sold his apartment in order to finance the initial stages of the TRIPMYDREAM project. “Lastminute.com can provide us a huge platform across Europe and globally. They can offer traffic, expert knowledge, and content.” Burenok is clearly enthused by his company’s new Italian colleagues, speaking of the partnership they are forging as ‘La Familia’. “We are becoming one family,” he smiles.

Ukraine’s entrepreneurs and IT experts must unite

The success of TRIPMYDREAM has provided considerable inspiration for other Ukrainian IT professionals. The Ukrainian IT sector is increasingly making headlines as one of the world’s leading outsourcing destinations, but much of the industry remains focused on completing set tasks for foreign clients rather than creating unique and original products. Burenok sees this as part of the natural evolutionary process of the industry and predicts a growing emphasis on IT entrepreneurship as the sector grows in confidence and gains experience. “Ukraine’s IT industry has a lot of further growth ahead of it. The primary focus is still currently on outsourcing contracts, but this experience will eventually equip Ukrainian IT companies with the skillsets and knowhow to create their own products,” he offers.

Burenok’s own business background makes him acutely aware of the need for IT startups to combine technical knowledge and commercial savvy. He says combining these talents will allow the IT sector to move to the next level and transform Ukraine into a genuine startup nation. “The future development of the IT sector will now depend on the ability to find the right blend of entrepreneurial brains and technical brains. Ukraine has a huge number of both entrepreneurs and IT specialists. The hunger is there - the challenge for them now is to cooperate.”