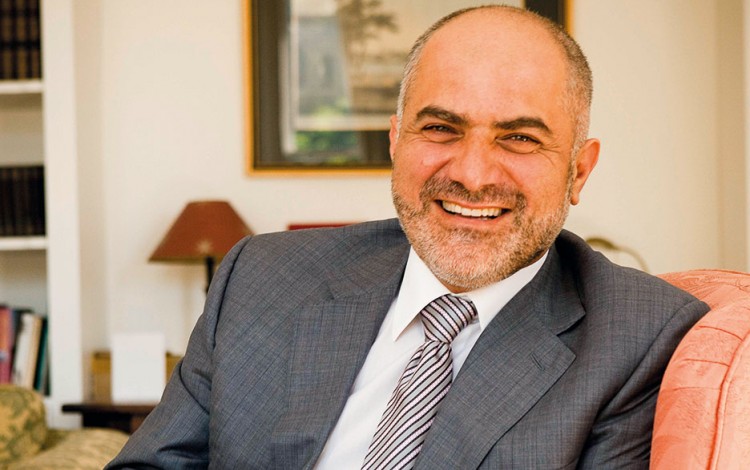 While much of the Ukrainian economy struggles to attract international investment, the country’s IT sector continues to forge ahead. An array of global industry big names and ambitious international startups have already entered the Ukrainian IT sector, attracted by a winning combination of world class local programming talent and competitive rates. These international entries have joined a thriving local IT industry that has emerged over the past decade as one of the key engines driving the growth of the Ukrainian middle classes.

As Ukraine’s IT sector continues to expand, Ukrainian IT professionals are playing an increasingly prominent role in global internet innovation. International investors are entrusting their Ukrainian partners with ever greater design and development responsibilities, many of which have the potential to set trends and open new avenues throughout the industry.

Syrian-Ukrainian businessman and philanthropist Hares Youssef is part of this growing band of international IT innovators looking to utilize Ukrainian knowhow in order to translate original IT ideas into groundbreaking products for worldwide audiences. Mr. Youssef has collaborated with Lviv IT companies on a number of projects over the past seven years. Together with his Lviv partners, he is currently finalizing the preparations for an online virtual currency that he hopes will revolutionize the way the whole world communicates through social media.

Hares Youssef’s Ukrainian connection stretches back to the twilight years of the Brezhnev era, when he left his native Syria for Kyiv as part of a student exchange programme that reflected the close relations the Syrian government of the time enjoyed with the Soviet Union. He returned to Ukraine in the early 1990s, building up a business empire with interests in a range of Ukrainian industries. His eponymous HARES Group Holding has since expanded to include assets and interests in a number of countries, but Mr. Youssef has maintained his ties to Ukraine.

As the Syrian-born businessman has branched out into the IT sector, he has capitalized on this association with Ukraine to develop productive partnerships with a number of IT companies in Lviv – considered by many to be the unofficial capital of the country’s booming information technology industry. His latest innovation is the ‘Golden Hearts’ virtual currency, which will allow social media users and other online audiences to make charitable donations and send monetary gifts across the internet via a fully convertible virtual currency backed by physical gold and pegged to global commodities market prices. Mr. Youssef is working on the ‘Golden Hearts’ initiative with the Lviv office of London-based IT company YouTeam. The electronic currency uses the sdk.finance engine developed by Cyberforce – a Czech-Ukrainian fintech development team. He has previously teamed up with YouTeam on a number of IT projects including the ‘Panda Club’ indoor positioning app (in partnership with Devabit) and ‘Hubbub.fm’ voice social network (with Intellias).

A Ukrainian citizen with a home in Kyiv as well as a residence in the Austrian capital Vienna, Mr. Youssef sees Ukraine’s IT sector as one of the country’s most competitive industries and a flagship for the emerging Ukrainian knowledge economy. Business Ukraine magazine sat down with the social media innovator to discuss virtual currencies, Ukrainian IT expansion and the future direction of the global communications revolution.

Your business career began in traditional industries such as metallurgy, but much of your attention now focuses on IT endeavours. What attracted you to the world of social media innovation?

I genuinely love developing my ideas in the IT sector. It provides me with lots of answers to philosophical questions I have about how humans relate to each other and to the natural world as a whole. I see the internet as the only medium capable of promoting the key values of communication, transparency, and sharing – sharing ideas, sharing information, sharing emotions, sharing resources, and sharing money.

Throughout my life, I have always been interested in the idea of a common consciousness for all humanity. The world contains so many different nations, different languages, and distinct groupings, yet there are ideas and emotions that unite us all. Internet communication is still in the early stages of development, but we are already seeing the formation of this common consciousness, which is capable of transcending the old borders and barriers. In IT terms, today’s internet fulfills the function of a common server for all humanity. Each and every one of us has access to this server. I find it very exciting and inspiring to be part of this historic process, and to contribute personally to the evolution of this common consciousness.

Social media has become a core component of our everyday lives in a very short space of time. What do you see as the shortcomings of today’s social media environment, and what is your vision for the future of social media?

The values of the market are far too dominant in today’s social media. The owners of social media platforms treat users as raw material. We call them users, but in reality they are actually being used. They need to become more empowered, to become stakeholders in the places where they spend their time and invest their energies. My ultimate goal is to help foster a culture of transparency and promote the concept of sharing. My philosophy is, ‘the more you share, the more you get’. The ‘Golden Hearts’ concept is a gateway that can bring us towards this philosophy of sharing. As a philosophy, it is perfectly suited to the almost limitless possibilities of the internet. It can take us beyond the old models of communication and interaction that first developed and evolved in the street.

The success or failure of social media projects depends almost entirely on their ability to attract users. Which demographics do you see as the primary participants in the ‘Golden Hearts’ initiative?

Initially, the ‘Golden Hearts’ concept will primarily be of interest to people with large numbers of online followers and to female social media users, who generally place greater value on sincere displays of affection. Sending a ‘Golden Heart’ to a lady will mean more than simply making a more conventional money transfer. ‘Golden Hearts’ represent solid gold, and they can also include personalized messages. This will allow for more emotional input and interaction. As people share their ‘Golden Hearts’, they will share their emotions. Charities will also benefit from the ability to receive direct online donations. We expect to secure partnerships with a number of international charities who will then be able to receive ‘Golden Hearts’ donations worldwide.

The overall objective is to create a platform that helps people to express themselves more directly, allowing them to show their appreciation without the interference of corporations or the market. There is a need for a more meaningful set of values governing internet communication. At present, all we have are Facebook ‘likes’, which are essentially empty gestures despite their popularity. With ‘Golden Hearts’, you will be able to show your support transparently and materially in a way that will be noticed by others.

You have business interests across the globe but choose to work with Ukrainian IT companies. What factors influenced your decision to opt for Ukrainian IT development partners?

Prior to the ‘Golden Hearts’ project, I had already developed a range of startups with Lviv IT companies over a number of years. The people I work with in Lviv are extremely skilled and are able to translate my concepts and ideas into functioning IT solutions. They are diligent workers who have the ability to focus on core ideas.

Many major American and European IT companies now have offices in Ukraine, but it makes more sense for me to work directly with Ukrainian companies. I own shares in American IT companies but I choose to cooperate with Lviv companies because it is easier for me to find a common language with them and communicate my ideas.

How does your experience with Ukrainian IT companies compare to your interaction with IT professionals in other countries?

IT professionals are a separate nationality. Wherever they come from, they are all the same. I love this new type of people. If you go to Silicon Valley, you will see that there are no national or language barriers. You will find Americans, French, Ukrainians and South Americans working side by side and communicating in the common language of technology.

Differences still exist from country to country in terms of access to capital and in management capabilities, and this is where American companies continue to excel. I will be working with American partners on the global marketing of ‘Golden Hearts’ following the official project launch at the end of 2015.

I hope it will bring additional prestige to the Ukrainian IT market. From my point of view, associations with Ukrainian IT can only be a positive thing. The Ukrainian IT sector is already highly respected. It enjoys wide recognition internationally. I am convinced this reputation will continue to grow in the coming years. In the IT world, ‘Made in Ukraine’ is a strong brand.