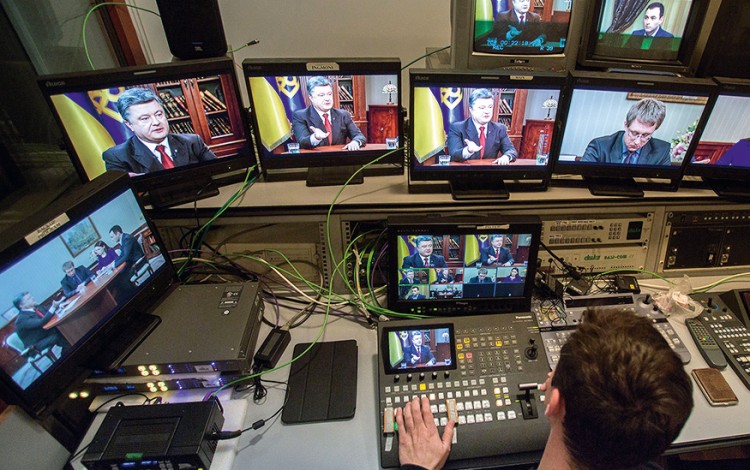 It was the early 1990s and Ukraine’s Deputy Minister of Communications was asking why anyone would want to start a local radio station. To make money. Puzzled, he asked how a radio station could make money. Sell advertising. He contemplated for a full minute and then proclaimed, ‘It will never work.’ It often felt like few in Ukraine in 1992 knew more about commercial media than I did - a 28-year-old American whose experience was limited to watching perhaps too many Saturday morning cartoons growing up. Hello to the world of Ukrainian television.

One evening in those early days, a major Ukrainian TV channel was screening an American film – Julia Roberts and Richard Gere are never so quirkily romantic together as when both their voices are dubbed by a single gruff male baritone speaking Russian. Not long after the FBI Copyright Warning announced the movie’s beginning, the subtitle IF YOU ARE WATCHING THIS, CALL 1-800-NO-COPIES ran across the screen. I called. The operator asked how many others were watching along. I told her I was not exactly sure, but estimated the audience to be about four million. The lady gasped and connected to a special extension – so special it only had an answering machine.

The Minister of Information then visited London, Europe’s media capital. He indignantly lectured senior executives of all the major TV and film studios. He had personally written the legislation combatting film piracy and they had no business questioning Ukraine’s commitment to fighting film piracy. He somehow forgot to mention that he was a co-founder and shareholder in the channel airing the Richard Gere movie.

The Soviets had learned that controlling the media means controlling the people. They just didn’t learn the details. One radio station in the early 1990s bribed local politicians by paying in airtime instead of via cash in suitcases: fame, influence, and prestige where treasured by the political classes and greedily accepted. But only the few who had access to media ratings knew that no one was actually listening to this radio station, except possibly the families of whoever was being interviewed.

Soon election victories where being attributed to deft use of television. Asked his prognosis on the next day’s election outcome, a senior Ukrainian TV executive of the early independence era quipped, ‘didn’t you hear? We decided 57%-37%.’ Here was a way to make huge cost savings on election research by simply deciding the outcome beforehand. Things have since become more sophisticated, but the basic principles established in the 1990s remain the same. The media certainly influences Ukrainian voters, but in an oligarchy, only a handful of voters really matter.

Ukraine’s commercial television market grew as fast as anyone would have expected in 1993- 1994, but this growth still succeeded in taking many in Ukraine by surprise. By 1995, advertising revenues from some of the biggest international corporations had grown so large that they were attracting attention from a range of interested parties including administration bagmen, scud missile dealers, and Russians. They noticed the advertising dollars rolling in, but did not yet quite understand the correlation of advertising to business. One major international corporation told state television officials, ‘we are the largest advertiser in the world therefore we want the lowest prices.’  The reply they got from the state television representatives was equally straightforward, ‘you’re the largest advertiser in the world, so you can afford to pay the highest prices.’ The result was a predictable impasse and another year without the world’s largest advertiser.

Gradually, Western media executives also noticed the market growth in Ukraine, and realized that with the right partner they could do anything. This meant business without rules, with the ability to exert major influence over the government. Millions were invested. A few fancy jeeps where given to the right people to secure a TV license. Millions were also lost - business without rules makes investment longevity dicey. And from all this, Ukrainians learned from these rich, well-placed Westerners that there is money in media and you can ignore lectures about corruption as long as you have the right friends in Western capitals.

Ukrainian TV continues to play by these same rules. Two years ago, Ukraine’s advertising dollars could not financially support the dozens of existing TV stations broadcasting in the country. Today, the Ukrainian media market has shrunk by 50% and yet there are still over 40 multi-regional TV stations. All of these channels are owned or controlled by the top four Ukrainian oligarchs – except one channel owned by the President. A secret cartel controls TV advertising dollars. This cartel is so secret that only the entire advertising and media sectors have been clued in. The cartel inflates prices, unwittingly pushing advertising dollars to radio, digital and outdoor media. Oligarchs continue having to subsidize their TV channels in order to keep control of information. TV channel staff keep ‘liberating’ company money in clever sales and production schemes.

Today, Russia wages information warfare against Ukraine globally. Meanwhile, Ukrainian oligarchs wage information warfare domestically. Putin says he is only really concerned about ethnic minority rights in east Ukraine. Ukraine’s oligarchs say they are only really interested in rule of law and no more corruption. There is little to suggest major changes to the media landscape in the next few years. Instead, Western governments will likely continue accommodating the oligarchy. As a result, the oligarchs can carry on driving away competition and international investment into Ukrainian television. Freedom of the press will remain limited to the diverse views of Ukraine’s four or five richest men. Limited public accountability will ensure there are limited government reforms, leaving the Ukrainian economy to languish.

About the author: Andrew Bain is an American businessman with more than two decades of experience in the Ukrainian media sector.