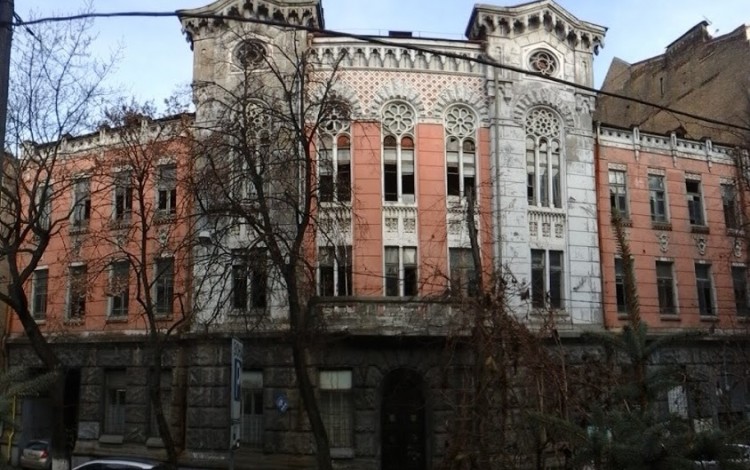 The arguments for urban renewal are not new. In many cities all over the world, this process involves improving the urban landscape by restoring rundown neighbourhoods in a sustainable way to increase a city’s property values and tax base, and to promote urban density and slow the growth of urban sprawl.

Where Kyiv is concerned, one seldom hears much about this topic, despite the presence of large numbers of derelict buildings in the historic central regions of the city. I recently sat down with the team at Urban Curators to discuss their work in this field. Urban Curators is an interdisciplinary Kyiv-based group that works in the fields of urbanism, architecture and cultural management. They assist those who are seeking a vision for utilizing neglected spaces.

A few months ago, Urban Curators did some quick research on derelict historical buildings in Kyiv. In the centre of the city alone, they found more than 65 objects. They then created a map of these properties. It turns out that most of the buildings are located in the so-called Upper City and the riverside Podil region. Among them, the greatest quantity of buildings date from the late nineteenth to early twentieth centuries. This is the so-called late imperial period, for which there is a certain nostalgia.

Kyiv has both residential and industrial buildings in the derelict category. Many of them are now vacant and in different conditions or states of disrepair. What is particularly notable is that these buildings are often street-front properties with prestigious addresses and thus directly affect the city’s image and the value of surrounding real estate. It is difficult to imagine how many derelict buildings lie forgotten inside Kyiv’s vast collection of courtyards.

Whereas urban renewal usually involves restoring entire rundown neighbourhoods, in the case of Kyiv any potential investor should imagine a sea of desirable real estate alongside islands of derelict and neglected historical buildings standing in some of the most desirable prime locations.

The Urban Curators’ map, which they are constantly updating, only indicates derelict buildings in the centre of Kyiv. This map serves as their database for the development potential of the city centre as they see it today. One of the more interesting examples on the map is a building on Reitarska Street. This unusual Art Nouveau building has an elegant design, sits on a cozy downtown street, and has an interesting history. It was once an estate, a hospital, the Ministry of Health under the Ukrainian People’s Republic, and a university faculty. During the course of its history, the building’s function has changed several times, but it was always connected with health and medicine. Because of this storied legacy, it would be a shame for the history of this building to end in ruin.

With the right investor, this building could continue to flourish as a city landmark. A new function for the building could be housing or offices, or a combination thereof. A new function could also be dictated by infrastructure (or lack thereof) in the area. For example, if the neighborhood is lacking a corner grocery store or a local cafe, then one could be located on the first floor. In the past decade, shopping and services close to residential areas have become increasingly difficult for Kyiv residents to come by in some central neighbourhoods. However, in order to develop this property, a minefield of regulations and ownership issues must first be navigated.

Today many of Kyiv’s derelict historical buildings are legally classified as ‘architectural monuments’. However, local legislation is so weak that penalties for violations can be easily avoided. This situation has ‘untied the hands’ of unscrupulous investors who in the past would buy a property in the historical centre of the city purely in order to acquire the land, since land in central Kyiv has a high commercial value. Usually a historical building would then be allowed to deteriorate so that it could be condemned and demolished in order to build something new and better in its place, regardless of any opposition by city residents.

Despite more than 20 years of Ukrainian independence, the concept of urban renewal in Kyiv is still in its infancy and there are relatively few good examples of successful and proper restoration and rehabilitation of historical buildings. On the other hand, this situation creates opportunities for pioneering investors, particularly those who have a successful track record upgrading historical buildings. A project that maintained and restored Kyiv’s historical heritage would set a successful precedent and provide an investor with reputational capital for future projects.

Not surprisingly, some of the challenges to urban renewal lie in the non-transparency of administrative processes and the fact that important information about a property is often non-public. Searching for the owner of a building can be an extremely bureaucratic process, while the procedures for obtaining information are generally complex and opaque. This situation creates many opportunities for corruption. Often the owners of buildings and land in Kyiv are public figures (national or municipal deputies, for example), so the legal ambiguity of the current situation is extremely convenient for them. One could even say there is an unofficial club of people who own a significant amount of property in the city. Today many of these owners do not invest in the redevelopment of these historical buildings because it is not financially feasible or convenient for them.

Another complication appears in cases where it transpires that a building and the land on which it is located involve different forms of ownership. For example, a plot of land could be owned by the state or municipal government under a long-term lease, while the building owner might be an individual or legal entity.

Nor does the fun end there. Even if one manages to identify the owner of an historical building or the land under it, in many cases the ownership documents indicate the company that owns the property but do not disclose the ultimate owner and decision maker. The quest to identify the ultimate owner of a property can quickly transform into a never-ending Herculean task.

There are a number of different ways to acquire partial information about a property. For example, the Kyiv Department for Urban Planning and Architecture has created a website (http://mkk.kga.gov.ua/). However, this contains only limited information, and to obtain additional info on ownership one is required to submit a separate request. Some local NGOs can provide assistance in obtaining property info. The office of electronic services of Ukraine’s Ministry of Justice is also a place where one can submit an inquiry regarding ownership of a building or land.

There are many good reasons why urban renewal in Kyiv is still in its infancy. While the amount of opportunities may seem enticing on paper, these opportunities are only for a determined investor who can afford to take a long-term view and who is prepared to work diligently and patiently with local experts to overcome considerable obstacles. The streets of the Ukrainian capital are full of potential treasures waiting for renovation, but there are good reasons why such projects often take years to bring results.