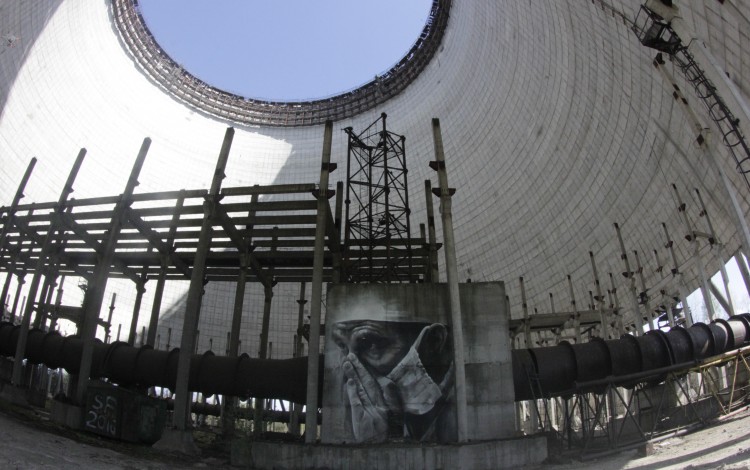 Working in the photorealistic style and painting inside the unfinished reactor 5 at the Chornobyl power plant, Guido van Helten created an artwork based on a photograph taken at the time of the disaster in 1986 by renowned Ukrainian photojournalist and chronicler of the Chornobyl tragedy Igor Kostin.

Guido van Helten said he chose to recreate the work of Igor Kostin in the mural as a tribute to the Ukrainian journalist's efforts to document the tragedy and its aftermath. Kostin sacrificed his health in order to tell the story of Chornobyl to the world. He passed away in 2015.

"I wanted to create a work that honoured the sacrifices Igor Kostin made in order to document this disaster. I also wanted this work to underline the importance of photo journalism as a medium for sharing important information with the world," commented the artist.

Ukraine's Chornobyl ('Chernobyl' in Russian) was the scene of the world's worst atomic energy disaster in April 1986. The tragedy was exasperated by the initial refusal of the Soviet authorities to acknowledge the catastrophe or warn the population about the scale of the danger they faced. Instead, traditional May Day public holiday parades took place in nearby Kyiv and other Soviet cities, while senior Communist Party members quietly evacuated their own children to safer locations on the Black Sea.

The Kremlin's handling of the Chornobyl tragedy is widely regarded as one of the key events leading up to the collapse of the Soviet Union. It shattered faith in the Soviet state and led to widespread public fury. Independent Ukraine continues to live with the legacy of the disaster. Meanwhile, the site has become a ghoulist tourist attraction and remains a testament to Soviet incompetence and inhumanity.

The Chornobyl mural is part of the ArtUnitedUs project, a global street art initiative centred on Ukraine aiming to promote global peace and international understanding. For further information please contact This email address is being protected from spambots. You need JavaScript enabled to view it.