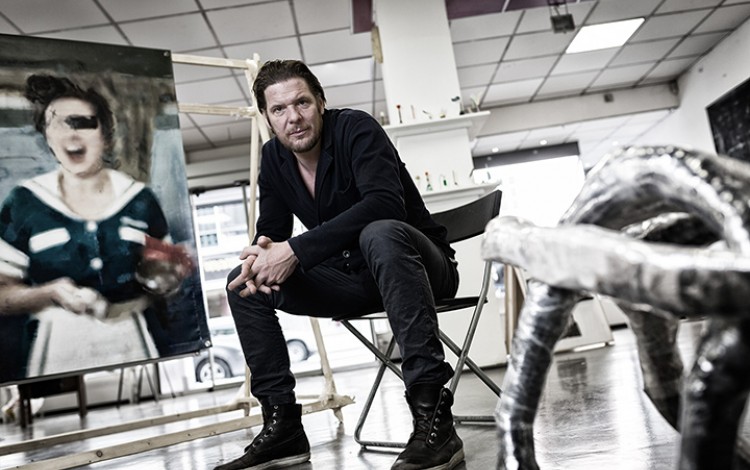 The geographical focus of Ukraine’s vibrant contemporary art scene will switch to Zhytomyr in early November as the central Ukrainian city plays host to a highly ambitious concept event set to take place on the grandest of scales. Initiated by Zhytomyr-based Austrian company Eurogold and orchestrated by Austrian artist Gerhard Fresacher, the NO DISCO BEHIND evening will feature a dizzying array of paintings, sculptures, installations, performance art and disco dynamics set against a cavernous 14,000 square meter backdrop of industrial architecture. It is no exaggeration to say that sleepy Zhytomyr has never seen anything quite like it before.

NO DISCO BEHIND will feature the works of a range of Austrian, German and Ukrainian artists, who will come together in a variety of mediums to tell the story of Chekhov’s “Three Sisters” in a new and entirely original manner. Performing artists will include Bhima Nemesis Griem (Germany), Michael Maier, Igor F Petkovic‘, A W Grill, Niko Sturm and Manfred Plessl (all from Austria) and Lera Nikonova & Friends (Ukraine) along with a range of international and local musicians, performers, actors and other colorful characters.

Speaking to the Zhytomyr media during preparations for the November event, Austrian artist Gerhard Fresacher said the sheer scale of the NO DISCO BEHIND concept reflected perceptions in Austria of Ukraine’s giant size and prominence on the European map. It will feature around 200 separate exhibits. Collectively, they will seek to identify and explore common cultural currents linking the epochs of human history, with contemporary social media titillation and chatroom banter juxtaposed against the classics of world literature and pop art images embellished by theatrical flourishes.

Fresacher is no stranger to marquee artistic performances. His background in theatre and TV production has combined with a classical artistic training to produce a multimedia approach that makes the Austrian a particularly versatile curator capable of coordinating highly eclectic events. Born in 1972 in Austria, he graduated from Vienna’s Academy of Fine Arts under the mentorship of professors Erich Wonder and Cristoph Kleber. Fresacher has since worked as a theatre artist, movie and TV show producer, sculptor, film director and theatre director, collaborating with the likes of Hugo Boss, BMW, Ferrari, Hamburg Talia Theatre and the City of Vienna. He currently splits his time between Carinthia and the Austrian capital.

This arts extravaganza in Zhytomyr is taking place under the patronage of Austrian Ambassador to Ukraine Hermine Poppeller and aims to attract the attention of the arts community in nearby Kyiv. Ukraine’s contemporary arts scene has thrived in recent years as the country has reveled in its growing reputation as Eastern Europe’s newest hipster hangout, but much of this swagger has remained firmly within the boundaries of the capital city itself. “NO DISCO BEHIND” is a timely reminder that Ukraine’s cultural universe extends far beyond Kyiv. The event aims to bring together Austrian and Ukrainian artists while building cultural bridges between the two nations. It may also provide inspiration for other Ukrainian regional capitals and serve as a welcome stepping stone towards a more geographically diverse approach to the development of the contemporary arts in today’s Ukraine.

Email: This email address is being protected from spambots. You need JavaScript enabled to view it.