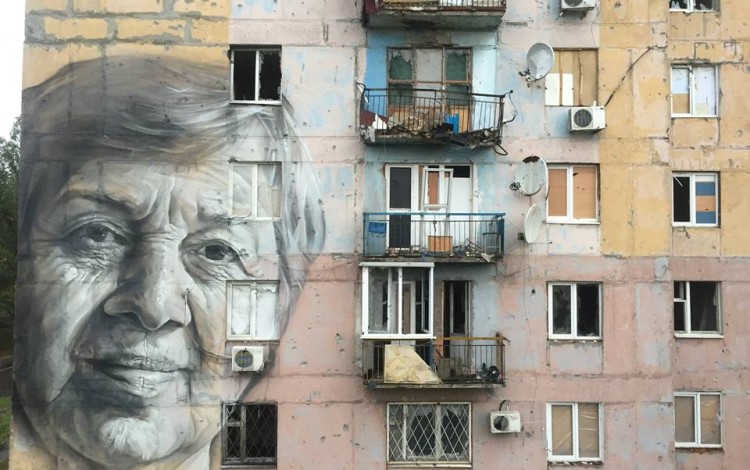 The frontline Ukrainian town of Avdiyivka has seen all manner of shocking things since the outbreak of the Russian hybrid war in 2014. However, it may never have witnessed anything quite as strange as the appearance in early October of an Australian artist mounted on a construction crane painting a giant portrait of a local schoolteacher within sight of the contact line.

Australian artist Guido van Helten is no stranger to Ukrainian street art, but venturing into the conflict zone was a new and challenging experience for him. The subject of this frontline portrait was Marina Marchenko, a 73-year-old local Ukrainian language and literature teacher who has remained in Avdiyivka since the start of the conflict. The Australian chose Marchenko following a selection process carried out together with local authorities. He explained his choice by pointing to what he described as the kindness in her eyes.

This frontline initiative was the latest and most daring departure within the ArtUnitedUs project - a Ukraine-based global initiative launched in late 2015 that aims to send out a message of international peace and cooperation through street art collaborations. Ukrainian arts entrepreneur Geo Leros is one of the men behind the ArtUnitedUs project and the person responsible for organizing Guido’s trip to the conflict zone. “Working in a war zone was a strange sensation,” Leros told Business Ukraine magazine. “One the one hand, there was a sense of constant danger. On the other hand, we had no idea what could happen at any moment or what was going on around us. Being there raised all sorts of questions: how can people live in such conditions? Why is this conflict continuing? Why must the civilian population suffer? We did not have much of a chance to explore these issues. Ten minutes after the portrait was completed, we left for Kyiv.”

Ukraine has experienced a massive upswing in street art since the country’s 2013-14 Euromaidan Revolution. International artists have converged on Kyiv to participate in this mural mania, often after having been inspired by the country’s pro-democracy aspirations and intrigued by the historic changes taking place in Ukrainian society. Their giant works of art have significantly enlivened the city’s contemporary ambience and added to the sense of post-revolutionary change.

This trend an also be seen in smaller-scale street art initiatives in Ukraine’s regional cities. The portrait in Avdiyivka was the first major street art project within the conflict zone in eastern Ukraine. It was possible with support from the Ministry of Information Policy and Dragon Capital investment  bank.