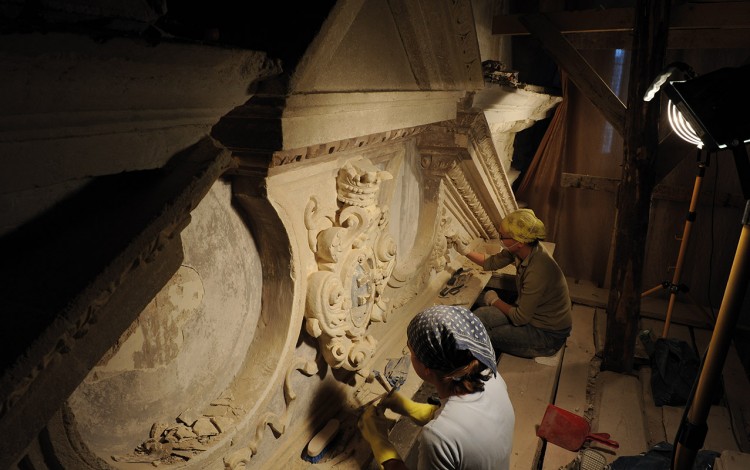 The Polish presence in today’s Ukraine stretches back many hundreds of years, creating an almost limitless repository of monuments reflecting the shared heritage that connects today’s Poland and Ukraine. According to rough estimates, there are over 45,000 examples of Polish heritage in Ukraine, including everything from houses of worship and fortresses to tombs, ornaments and paintings. In reality, there is no exhaustive information on the extent of Polish heritage in Ukraine because new information constantly comes to light as researchers and academics from both countries regularly uncover new treasures and forgotten chapters from the shared past.

The history and culture of the eastern regions of the Polish-Lithuanian Commonwealth, including much of modern-day Ukraine, Belarus, Lithuania and Latvia, have always been a focus of attention in Polish academic and cultural circles. As an area of study, it has attracted everyone from historians and architects to archivists, musicologists, writers, artists and renovators. Prior to the collapse of the Soviet Union, accesses to the lands beyond Poland’s eastern borders was severely limited. All this changed following 1991, with the end of Soviet restrictions ushering in a new era of scientific and academic research.

A succession of tomes have appeared over the past 25 years as part of efforts to create an authoritative inventory of the historic landmarks and artifacts located in the eastern lands of the Polish-Lithuanian Commonwealth. Polish scientists and students in the departments of history at a range of universities have succeeded in restoring the memory of hundreds of memorials. In many cases, this has meant introducing the international academic community to examples of Commonwealth heritage for the very first time in the modern era. At present, the most voluminous part of these records consists of 23 tomes entitled: The Roman Catholic Churches and Monasteries of the Old Ruthenian Voivodeship (Krakow, 1993-2015), covering the lands of contemporary Ukraine.

The process of navigating this previously underexplored chapter of Eastern European history has attracted attention throughout contemporary Polish society. Polish cultural institutions, museums, archives, libraries, art colleges, churches and religious associations, as well as non-governmental organizations, have all involved themselves in research projects. They have also become engaged in restoration works to repair and preserve historical monuments connected to Polish cultural heritage that are currently located beyond the borders of the country. A program initiated by Poland‘s Ministry of Culture and National Heritage seeks to support these restoration efforts and is currently administered by the Department of Cultural Heritage Abroad and Wartime Losses. It comes as no surprise to learn that restoration projects in today’s Ukraine have received the most financial support from the Polish Ministry of Culture. A wide range of projects have already been undertaken, with numerous initiatives of special significance in Lviv, made possible thanks to cooperation between the Polish authorities and the local municipal administration.

Lviv occupies a unique place in regional history. For  centuries it has been home to a diverse range of nationalities and faiths. Ukrainians, Poles, Jews, Armenians, Germans, Czechs, Tatars, Italians and many more have settled in this treasure trove of East European lore. Each nation and community has left traces of its presence inscribed on the fairytale facades and elegant architectural ensemble of the city. Polish heritage activities have paid particular attention to houses of worship of Lviv, with renovation and reconstruction works taking place around the city since the mid-1990s. One key focus has been Lviv’s ancient Armenian Church, where the colourful, decorative paintings of Jan Henryk Rosen have been restored. Similar efforts have helped improve the condition of the Latin Cathedral, the Franciscan Church, the Roman Catholic Church, and the Jesuit Church which now serves as the official church for the Lviv garrison of the Ukrainian Armed Forces.

Perhaps the most remarkable monument to Polish heritage in Lviv is Lychakiv Cemetery – a veritable city of the dead that is widely acknowledged as one of the most beautiful necropolises in Eastern Europe. This vast complex of tombs is located in the eastern part of the city and laid out in numerous avenues. It is the last resting place for a wide range of prominent individuals from the worlds of culture, science and politics. Many of the chapels and tombstones are regarded as historically important works of art in their own right, with the oldest dating back to the eighteenth century. Visitors will find sculptures created by an array of Polish masters, with many offering fascinating insights into the history of the city and the region. Joint teams of Polish and Ukrainian experts and artisans currently work together to manage maintenance efforts to preserve the tombs and gravestones, with a combined Polish-Ukrainian commission selecting the priorities for renovation efforts.

Recalling the saviour of Christendom

The region surrounding Lviv is dotted with pearls of Polish heritage. One of the focuses of renovation efforts over the past 25 years has been the Collegiate Church of St. Lawrence in the Lviv Oblast town of Zhovkva. Once one of the most important churches in the Polish-Lithuanian Commonwealth, it was built in the early seventeen century for the family of celebrated Polish military commander Stanislaw Żółkiewski and was designed by a team of Italian architects active at the time in the Lviv region. The church later enjoyed the patronage of Żółkiewski’s great-grandson King Jan III Sobieski, the legendary Polish monarch whose leading role in the decisive victory over the Ottoman armies during the 1683 Siege of Vienna saw him hailed by the Pope as the savior of Christendom. Associations with these two martial colossuses of Polish history transformed the church into a monument to the achievements of both men. Over the centuries, it went on to accumulate numerous memorials to the chivalrous past.

The advent of Soviet rule in Western Ukraine marked a sharp decline in the church’s fortunes. In line with Bolshevik practice, it was closed down as a house of worship and transformed into a warehouse. This led to extensive damage to the building itself and the dispersal of its priceless collection of artworks and furnishings. Thanks to the efforts of Polish and Ukrainian restorers, the church has now recaptured some of its former glory. The interior has been repaired and work continues on exteriors, including efforts to rescue unique fresoes.

The fate of the historic paintings that once adorned the church remains the subject of some contention. In the 1970s they were removed from Zhovkva and transferred to the Lviv National Gallery of Arts. For many years, the Polish Ministry of Culture and National Heritage worked to secure agreement for the paintings to undergo restoration works in Poland. The two largest works, depicting the Battle of Vienna and the Battle of Parkany, duly underwent restoration in Warsaw in 2007-2011. Poland would like to see both artworks returned to Zhovkva, where they had previously been displayed for 250 years. However, there is still no final decision on the issue from the Ukrainian authorities. At present, there are concerns that the current locations of the paintings at West Ukraine’s Zolochiv Castle and Olesko Castle are unsuitable, leading to fears of fresh damage.

Churches and cathedrals are a natural focus of efforts to preserve Polish heritage in today’s Ukraine, but these religious buildings are only part of the bigger picture. Thanks to funding from the Polish Ministry of Culture and National Heritage, the family estate of celebrated Polish poet Juliusz Słowacki in Kremenets has undergone renovation and been transformed into a museum dedicated to the man known as one of the ‘Three Bards’ of Polish literature. The renovated venue is now a popular destination among both literature lovers and tourists, who can also enjoy stunning local landscapes topped by the imposing nineteenth century Kremenets Lyceum, once known as the ‘Volynian Athens’. Every year in early September on the anniversary of Słowacki’s birthday, Kremenets serves as the meeting point for the ‘Dialogue of Two Cultures’ initiative, which seeks to build cultural cooperation between artists and academics from Poland and Ukraine.

The work undertaken in Kremenets is not the only initiative to preserve the Ukrainian legacy of a Polish literary giant. In 2015, a museum dedicated to Joseph Conrad opened in the writer’s birthplace – the central Ukrainian town on Berdychiv. Located inside a former monastery, the museum is a modernist tribute to the author of such classics as ‘Heart of Darkness’ that recognizes the importance of this shared heritage and stands as an outstanding example of contemporary Polish-Ukrainian cooperation in the field of culture.

Interest in Poland and Ukraine’s shared cultural heritage is likely to increase as more information becomes available and greater understanding develops. In 2018, the one hundredth anniversary of the restoration of Polish independence is likely to lead to further attention towards Polish heritage beyond the country’s modern borders. This process is not restricted to Polish nationals or members of the Polish diaspora. In recent years, there has been a notable rise in public awareness of a shared inheritance among populations throughout the former lands of the Polish-Lithuanian Commonwealth, with people increasingly acknowledging the historic legacy derived from membership of this multinational and multicultural state. Better awareness of the past has helped strengthen perceptions of a common heritage that defies simplistic definition as foreign or undesirable.

About the author: Dorota Janiszewska-Jakubiak is Deputy Director of the Department of Cultural Heritage Abroad and Wartime Losses at the Ministry of Culture and National Heritage of the Republic of Poland