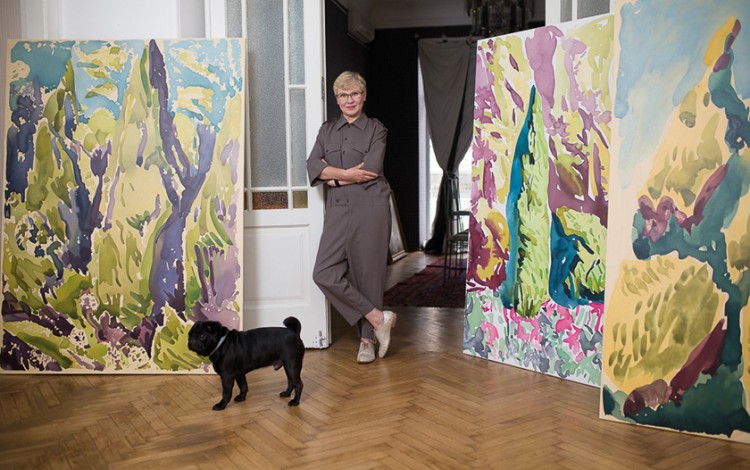 Post-Maidan Ukraine is currently experiencing something akin to a national artistic awakening and yet there are precious few platforms for young artists to bolster their credentials or sell their works. This is the thinking behind November’s ambitious “From Red to Yellow and Blue” art auction at TSUM department store in downtown Kyiv. The auction is the work of prominent Ukrainian arts scene personality Ludmila Bereznitska, who remains perhaps best known as the former owner of L-Art Gallery, one of the Ukrainian capital’s primary artistic focuses from 1996 until its closure in 2006. “Many of our young artists are hungry, literally,” she quips. ‘They are leaving the art world for other professions.”

Ms. Bereznitska says the contemporary art scene in today’s Ukraine is a paradoxical place that enjoys an abundance of exciting young talent while at the same time suffering from a lack of commercial credibility. The economic realities of the past few years have seen many galleries close, while the number of Ukrainian collectors ready to purchase emerging art has also plummeted. The upcoming auction is part of her bid to raise the profile of young Ukrainian artists among domestic audiences. Only then, she believes, will they be able to enter Western art markets and establish global reputations. “Until we learn to love our own art and to buy it ourselves, others will not follow suit,” she argues.

Like many in the Kyiv cultural world, Ms. Bereznitska takes inspiration from the Ukrainian capital’s recent hipster reinvention, but she would like to see Ukrainian artists receiving more of the media spotlight alongside the city’s many fashion designers and IT innovators. Ultimately, she dreams of establishing Kyiv as an arts hub for the whole of Eastern Europe. “Kyiv currently has a great window of opportunity to become a focal point for artists from across the region. It is in the perfect position both culturally and geographically, and has the necessary stature as one of Eastern Europe’s largest cities.” Indeed, the only thing missing is an arts market capable of attracting ambitious young artists looking to make a name for themselves and sell their works. Ms. Bereznitska hopes her coming art auction will be a small step toward rectifying this shortcoming.

“From Red to Yellow and Blue” Art Auction

Email: This email address is being protected from spambots. You need JavaScript enabled to view it.