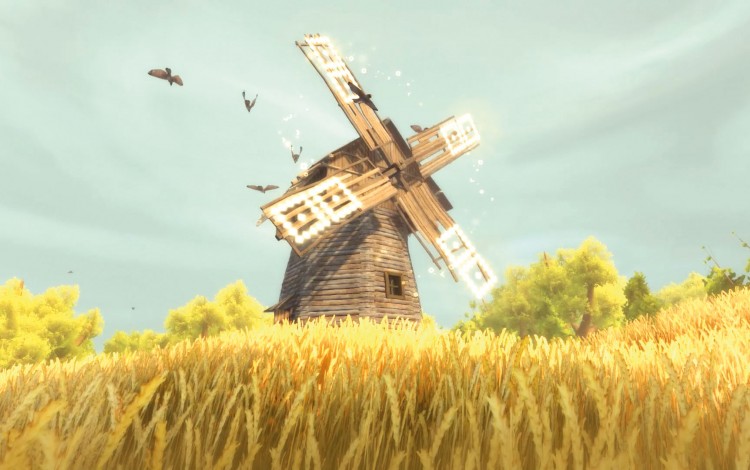 American game developer Colabee Studios has recently released a game based on Ukrainian literary legend Lesya Ukrainka’s ‘The Forest Song’. News of the game spread across the Ukrainian national media and delighted diaspora communities worldwide. But does this surrealist adventure, based on a fairy drama from over a century ago, have any chance of success? Could its interpretation of Ukraine’s traditional cultural heritage capture the imagination of the global gaming community like Ukraine’s headline-grabbing post-apocalyptic gamer hits S.T.A.L.K.E.R., Metro 2033, and Survarium, or achieve the popularity of the Cossack game series? With a host of indie awards under its belt following the preview in March earlier this year, ‘The Forest Song’ is gaining traction, not just as a game, but as an innovative social entrepreneurship project whose philosophy seeks to bring the forgotten folklore of Ukraine to the global audience.

‘The Forest Song’ is a videogame adaptation of Lisova Pisnya, the eponymous fairy drama in three acts by the most prominent female writer in classical Ukrainian literature, Lesya Ukrainka. Players assume the role of a peasant who has an extraordinary encounter with an elusive and powerful Forest Spirit. Their connection opens the player to a spirit world and sparks a dramatic clash between the supernatural inhabitants of the forest and the world of humans. It is a first-person adventure inspired by traditional folklore of the Polesia region of Eastern Europe, a place of everlasting forests, vast groves and valleys, crystal lakes, and meandering rivers that still remembers the legends of ancient times.

This is not the first attempt to translate Slavic folklore into a gaming format. ‘The Witcher’ game series, based on Andrzej Sapkowski’s fantasy saga, is an example of an established adaptation of Slavic lore, which gave rise to speculation on an eventual fantasy takeover of the CIS game-development scene, known predominantly for Chornobyl-inspired post-apocalyptic shooter survival horror games. The most successful of these, ‘S.T.A.L.K.E.R.’, based loosely on the Strugatsky brothers’ 1979 novel ‘Roadside Picnic’, gained worldwide acclaim for its original survival gameplay and captivating story, and enjoyed not only commercial success but also lasting appeal since its launch in 2007. Developed by Ukrainian company GSC Game World for Microsoft Windows, it remains the textbook example of a Ukrainian game-development success story, conceived, developed, and launched by Ukrainians.

Today, companies such as GSC, Plarium, 4A Games, Frogwares, Playtech, Wargaming, Gameloft, Ubisoft, and Playtika UA (recently purchased by the Chinese) are at the forefront of the Ukrainian game-development scene, which is becoming more and more competitive despite the toughened economic climate and associated tech leakage. Meanwhile, it is estimated that there are around 100,000 Ukrainian developers worldwide, with only a small fraction of those employed by local companies. The rest form part of a global workforce of Ukrainians whose competitive skillset, work ethic, and adaptability make them an asset to international companies looking to hire.

The contribution of Ukrainian talent to major foreign productions is difficult to estimate, but is significant. Daniel Poludyonny, a seminal game developer with over 30 completed projects in his portfolio, says: “Ukraine is already globally competitive, but the growth of this sector could be a lot higher if the government gave it better support by simplifying taxation measures for developers. Believe me when I say that a guy who spends 40 hours a week behind a screen has very little patience for queuing in local government offices for days, filling out paper forms that make no sense.”

Perhaps the most fascinating aspect of the buzz around ‘The Forest Song’ is the fact that it is an American company pitching to a global market. But Colabee Studios’ interest in Ukrainian folklore is no accident: Co-Founder and Creative Director Dima Veryovka is a Ukrainian native, and the project became something of a personal ideological quest for him. “Ukrainian mythology has so much to teach us, but for people outside of Eastern Europe it has remained largely inaccessible. Having grown up surrounded by these magical tales, it is so exciting now to be able to share this part of my culture with gamers everywhere,” says Veryovka.

Veryovka’s story is in many ways emblematic of the archetypal Ukrainian developer. He graduated from the Grekov Odesa Art School and the St Petersburg Art and Industry Academy, where he developed his already considerable drawing skills, and it is this academic training that is most often cited as one of the competitive features of Ukrainian talent. After that, he worked in Germany, moving to the US in 1999. As an artist, he took part in the creation of the SOCOM game series in Zipper Interactive and Sony Computer Entertainment America. But his best known work to date would become the BAFTA award-winning ‘Never Alone’, a game based on Inupiaq folklore of the Alaska Native people, produced in partnership between the Cook Inlet Tribal Council and E-Line Media. It is a touching puzzle-platformer video game that follows the adventure story of a girl and her Arctic fox companion, praised for its unique visual style.

Ethnography and IT innovation

‘The Forest Song’ is another such fusion of ethnography and IT development, conjuring its own inimitable world of fantasy. Materials for the game were gathered in the course of an ethnographic expedition to the Polesia region of Ukraine, led by Olena Ivanovska, Chair of Ukrainian Folklore in the Department of Philology at the Taras Shevchenko National University of Kyiv. In addition to providing invaluable information and context, she and her team facilitated interviews with key cultural experts throughout the region, including local residents captured on video sharing stories and lore. The trip made for a well-researched, authentic narrative, as well as fascinating bonus materials. That Lesya Ukrainka’s work should be chosen at this time of political turmoil and warfare is also symbolic – she was a political and civil activist, a feminist, and a proponent of Ukrainian culture who was jailed for her attacks on tsarist autocracy. Promotional materials emphasized the suppression of traditional Ukrainian culture by the Soviet authorities.

The game features a living systemic game world in which its human and supernatural inhabitants follow their own goals and agenda. The game encourages players to explore connections and conflict between humans, nature and the supernatural world. This seems apt in a world increasingly riddled with environmental problems, globalization that threatens the survival of traditional culture, and migration issues. Producer, game designer, and analyst Volodymyr Yezhov comments: “Every continent has its own cultural traditions, and these include game consumption. Our culture is closely intertwined with that of Europe, its history and legends. Europe, meanwhile, has spread its culture around the world due to colonization. So the barriers for the cultural reception of Ukrainian fantasy games aren’t too high.”

‘The Forest Song’ may bring much-needed focus to the challenges faced by Ukraine’s own development industry, especially the younger generation of developers. “What disappoints me is that in Ukraine, no-one would have believed in such a project,” says Igor Pospeshny, founder of GTP Media and GTP Indie Cup, a non-commercial game developer competition founded by his agency to encourage young independent talent.

Indeed, the problem of ensuring proper education of tech cadres in Ukraine is something that local developers have tried to solve. Pioneering game designer Aleksandr Khrutsky and artist Maya Veresen point to the drop in the general level of higher education in Ukraine since the 1990s. They also stress the detrimental effect the current war has had on Ukraine’s place on the global scene by forcing many of the established specialists to move abroad, squeezing Ukrainian projects out of CIS coverage, and discouraging international speakers from visiting. “Two major international conferences have been cancelled. Such events had previously provided great opportunities for artists like me to learn from world-level specialists like Jamal Jurabajev,” says Maya. Luckily, not everyone is staying away. In December 2016, Aleksandr Khrutsky and the team behind the Games Gathering conference will bring 32 lectures, workshops, and events to over 800 visitors.

Will ‘The Forest Song’ become a success? Some experts insist that the only reliable indicator of a game’s success is sales – at least, whether the project makes enough revenue to fuel the creation of the next game. Other criteria include gamer reviews, industry awards, and features on international gaming websites. However, let us consider the shifting landscape of the games market. In 2016 so far, free-to-play worldwide MMO revenue is USD 17 billion, while pay-to-play accounts for just over USD 2.7 billion. The emphasis on free games and open-access mobile gaming platforms means that indie companies and independent developers must invest in boutique-quality projects that have global appeal to keep up with the corporations. Colabee Studios offer a quality product that marries traditional storytelling with innovative visual means. They also bring forth a progressive philosophy of cultural engagement, and their emphasis on authenticity and prior research may present an attractive model to game developers who want to produce a competitive product on an over-saturated global market.

Colabee Studios present themselves as ‘an international collective of game developers, storytellers and culture bearers’. This emphasis on culture sets them apart in the sprawling seas of game development. The studio was founded upon the common belief that video games have the power to shape our world. By crafting games that celebrate people and their remarkably rich cultural traditions, Colabee invite a global audience to discover something new about themselves and the world around them. The enchanting world of traditional Ukrainian culture is a wellspring of inspiration, and ‘Forest Song’ its cultural ambassador among the global gamer community.

About the author: Myroslava Hartmond is the owner of Triptych: Global Arts Workshop (www.t-gaw.com), one of the first private art galleries in the ex-USSR est. 1988, and a Research Associate of the Centre for International Studies, University of Oxford, where she explores the role of cultural diplomacy in Ukraine.