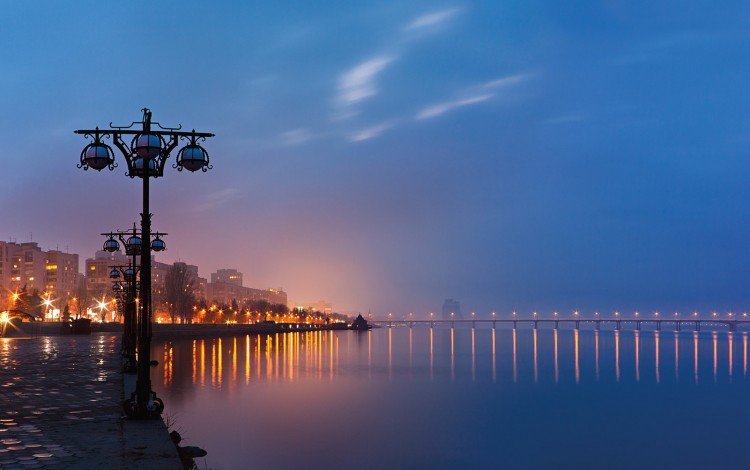 The mighty Dnipro River has been the focal point of the city since the days when it was a sprawling series of Ukrainian Cossack settlements. Today’s riverside embankment area is reputed to be the longest of its kind in Europe. It offers a range of leisure options including an array of cafes and restaurants with open-air terraces. Energetic guests will enjoy the lively evening boat tours that attract party people throughout the spring and summer months, passing up the river on mini-cruises to the accompaniment of blaring UkrPop and flowing alcopops. Romantic couples and laidback Dnipro residents also favor the riverside area for calming and poetic evening strolls. There are modern art installations on the Left Bank to admire, and a slow but steady stream of river traffic lazily passing by. The hypnotic pulse of this vast waterway will help you wash your cares away and relax after the challenges of daily life in Ukraine’s industrial capital.

Dnipro has historically always been home to one of Ukraine’s largest Jewish communities. Since 2012, the city has also hosted the Menorah Center – the world’s largest Jewish business and cultural center. This giant complex dominates the downtown skyline and is visible across much of central Dnipro. It features seven connected towers designed to recall a Jewish menorah, with special lighting on top of each tower playing the role of menorah candles. The center is large enough to contain everything from international-class conference facilities and ballroom to a four-star hotel and museum dedicated to the plight of the Ukrainian Jewish community during the Nazi Holocaust of WWII. There is also a kosher supermarket and kosher restaurant for all your culinary needs. The center has incorporated the existing neo-classical Golden Rose synagogue and other nearby buildings belonging to the Jewish community. It also houses business facilities and the offices of various Jewish charities.

This chic boulevard is a relatively new and fresh arrival to the Dnipro downtown architectural ensemble. It is one of the city’s most popular eating out and retail focuses. The district includes a range of fountains and other funky design elements such as overhead decorations. In the long and sultry summer months, it plays host to a series of terraces and streetside cafes that attract Dnipro’s beautiful people.

This downtown natural treasure is a wonderful place for family strolls and romantic interludes all year round. Connected to the city via a pedestrian bridge, it forms part of Dnipro’s largest park complex – Shevchenko Park. Monastery Island is home to one of Ukraine’s largest Shevchenko monuments and boasts some of the city’s best beaches. Weekenders can also enjoy a zoo, pony riding club, and various cafes. The island abounds in greenery and is a great place to chill out if you are looking to get away from the big city bustle without travelling out of town.

Known to many as “Ukrainian House” or ‘The House of Khrennikov”, this local landmark is a classic example of Ukrainian modernist architecture. Built in 1912 by prominent Dnipro businessman Vladimir Khrennikov, this four-story building has won plaudits as the architectural embodiment of Ukrainian national traditions. Ukrainian ethnographer and historian Dmitry Yavornytsky played a key role in the development of the architectural plans behind the building and helped add elements of authenticity. With its tower topped by wrought iron spikes, tiled roof and white walls, the building is reminiscent of architectural styles common during the era of the Zaporizhian Sich and the heyday of the Ukrainian Cossacks. The building’s ornate and detailed decorations include the coat of arms of the Zaporizhian Army – a Cossack with a musket and a sword. This monument to Ukrainian architectural heritage miraculously survived the destruction of WWII and serves today as one of the city’s top hotels.

Dnipro is home to Ukraine’s largest aquatic sports complex, the Sentosa Cable Park. The park is popular for wakeboarding and water skiing. It has already gained a reputation beyond Ukraine as a venue for international competitions. Sentosa Cable Park boasts state-of-the-art facilities and offers a dose of adrenaline close to the city center. This is an extremely popular hangout during the summer season and is a great place to improve your skills with the help of qualified instructors.

Throughout its history, Dnipro has always been home to a wide variety of different religious communities. This cosmopolitan heritage is reflected in the presence of numerous houses of worship that continue to coexist and function in the city. For example, visitors will find a range of different Ukrainian Orthodox, Catholic, and Protestant churches to explore. The city’s diverse religious traditions have helped to create a culture of tolerance while providing a welcoming environment for people of all faiths.

The Dnipro History Museum is home to one of the world’s largest collections of ancient steppe sculptures. A number of fascinating female statues stand outside the museum, offering an echo of a long-forgotten era when nomadic peoples dominated the surrounding region. Known to locals as Dnipro’s “Stone Women”, these iconic figures serve as a reminder of the many different cultures to leave their mark on Ukraine over the centuries. Similar stone statues dot the landscape throughout today’s Ukraine, with many looking out across the country’s seemingly endless southern steppe lands. Female figures tend to dominate this genre of stone sculpture, hinting at ancient associations with fertility.

9. Rocket Park in a Rocket City

Dnipro’s status as the capital of the Soviet Union’s rocket program earned it the twentieth century nickname “Rocket City”. You can catch a flavor of this locally produced ballistic brilliance by visiting Dnipro’s dedicated Rocket Park complex, which boasts a number of giant exhibits guaranteed to thrill fans of Cold War relics. The park serves as a reminder that Dnipro remains the capital of Ukraine’s space industry and a significant player in the international rocket and missile industry. It is also home to the Alexander Makarov Aerospace Museum – Ukraine’s only museum dedicated to rocket and space technologies.

Who needs the seaside when you have one of the world’s biggest and most beautiful rivers running right through the middle of town? The Dnipro River serves as a giant playground for the entire city and is an endless source of entertainment. Sailing is a popular pastime and visitors in the spring and summer months will see dozens of pleasure boats cruising up and down the river.