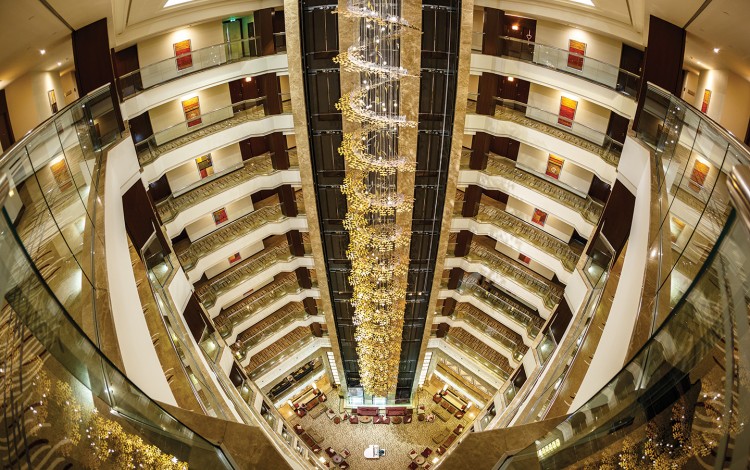 The Premier Palace Hotel Kharkiv is among the most recent additions to the eastern Ukrainian capital city’s collection of landmarks. Located on one side of the city’s colossal Freedom Square, it shares a skyline with the array of imposing early twentieth century structures that serve as the architectural legacy of Kharkiv’s role under the Bolsheviks as the first capital of Soviet Ukraine.

The Premier Palace Hotel Kharkiv was unveiled to the public in December 2011 as the first five-star hotel in the region. It was among the centerpieces in the city’s preparations to serve as one of eight host cities during the summer 2012 UEFA European Championship in Poland and Ukraine. The construction of the hotel was part of DCH President Oleksandr Yaroslavsky’s ambitious infrastructure upgrade ahead of Euro 2012. This elaborate upgrade helped convince UEFA officials to grant Kharkiv host city status and led to Yaroslavsky emerging as Ukraine’s largest single private investor in the country’s preparations. He reportedly invested USD 126 million into construction of the Premier Palace Hotel Kharkiv, making it one of the most expensive elements in the city’s preparations alongside the reconstruction of Kharkiv International Airport. Establishing Kharkiv’s first five-star hotel was an obligatory requirement in order to qualify as a potential UEFA host city. UEFA officials subsequently used the hotel as a regional headquarters during the championship itself in June 2012.

Since its international debut in summer 2012, the Premier Palace Hotel Kharkiv has become a mainstay of the city’s business life and a regular stage for international events connecting eastern Ukraine to the outside world. It currently plays host to a number of consulates and international organizations including the regional office of the European Bank of Reconstruction and Development (EBRD). Over the past four years, the hotel has served as the venue for more than 1500 events with an emphasis on business. Annual highlights include the AgroPort agricultural industry gathering and the International Economic Forum “Innovation. Investments. Kharkiv Initiatives.”

The hotel is also involved in a number of charity initiatives, serving as the venue for the annual “When Dreams Come True” international charity ball, which seeks to support orphans and victims of the conflict in southeastern Ukraine. In addition to this fundraising effort, the hotel also functioned as an improvised international crisis center in summer 2014 following the attack on the MH17 civilian airliner above the eastern Ukraine conflict zone.

Over the past seven years, the Premier Palace Hotel Kharkiv has earned a growing international reputation within Eastern Europe’s hospitality industry. In particular, it has benefited from the hotel’s role as host venue for senior delegations visiting the city. It has also begun to feature prominently in international hospitality sector rankings. For example, in 2016 American publication U.S. News & World Report rated the Premier Palace Hotel Kharkiv among Ukraine’s top five hotels.