Francis Goya on tour in Ukraine 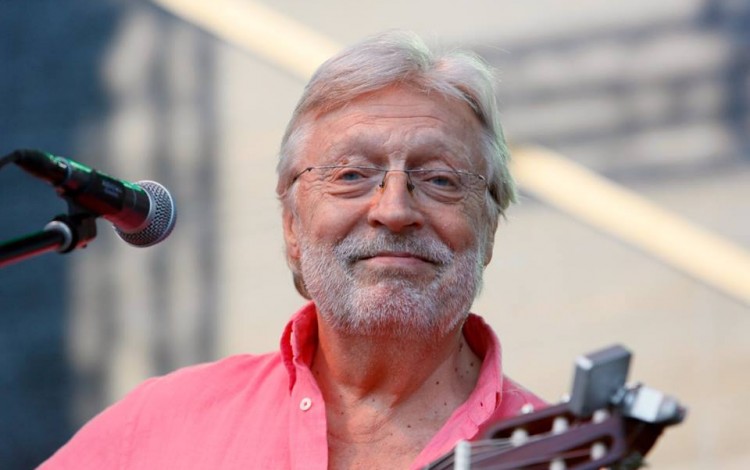 Francis Goya is a 69-year-old Belgian classical guitar player with a Latin flavor who has sold millions of albums worldwide – enjoying particular popularity in the former USSR ever since his ‘Moscow Nights’ song established his reputation behind the Iron Curtain in the 1980s during the Cold War.

The Belgian maestro is currently on a Ukrainian tour. Ahead of his 6 October Kyiv concert, he spoke to Ukrainian journalist Denis Jatsyshyn.

Denis Jatsyshyn: When you were 16 you formed your first group, so you have been performing for more than 50 years.

Francis Goya: Actually, my career is even longer, as I started out when I was 14 with a group set up by my brother.

Denis Jatsyshyn: Did your brother also play the guitar?

Francis Goya: No, he was a drummer. My friend was the guitar player.

Denis Jatsyshyn: Half a century on stage! How have you managed to stay in the saddle for so long?

Francis Goya: I think I was just determined. When you are young you think about rock n’ roll and just want to play. Then you become more serious and begin to have professional ambitions. My career was guided by an interesting story – something that happened to me just after I got married. I was attending a rock festival with my wife and watching bands that seemed like gods to me. I saw one group in particular and become despondent as I felt I’d never play with them. I told my wife, ‘that’s it. I’m giving up music and selling my guitar.’ I went to a music store and offered to well them my guitar. The man in the store thought I was crazy to give up and told me about a group he knew who were looking for a guitarist – it was the group I had been in such awe of at the festival!

Francis Goya: Yes. It is unbelievable. I was very shy at first but my wife encouraged me. Initially I was very intimidated by the band members even though we were the same age, but we had a meeting and I was accepted. It was very beautiful.

Denis Jatsyshyn: Maybe it was fate.

Francis Goya: It was my fate. Then I started to write music because I knew only notes. Then I started to work in the studio for different artists. I became a professional in the space of one week. It was a dream with a group that I dreamt about. After that, I was inspired to compose. At that time, I was 22 years old. I had almost given up and sold my guitar. It is quite a story.

Denis Jatsyshyn: It sounds like the plot for a novel.

Francis Goya: Absolutely. It was also down to luck and meeting the right people at the right time. Then I recorded my first album, ‘Nostalgia’, which was just a tune I’d written for my father. I made the demo on a dour-track recorder I had at home. I had made lots of tapes prior to this. One day a producer asked to listen to some of my recordings. He picked out ‘Nostalgia’ and said ‘this is a hit – you have to record it.’

Denis Jatsyshyn: That was back in 1975. ‘Nostalgia’ became your big international breakthrough.

Francis Goya: Yes. My first single sold well in Holland then Germany, Romania and France, leading to an album.

Denis Jatsyshyn: Do you remember your first tour?

Denis Jatsyshyn: Luckily for you, music is a universal language. When you are talking about music, the most important thing is to give your soul to the audience.

Francis Goya: You have to transmit music to the audience. If you can touch them and give the impression that you play with soul and honesty, that is usually enough. I can feel my audience I and I know when I am touching people with my songs.

Denis Jatsyshyn: Did you ever imagine that you would become a global star?

Francis Goya: Never! Before I made ‘Nostalgia’, I was playing jazz and performing mostly as a backing musician. I never thought I would be a star. When you set out to do something, you must not listen to people who say it is not possible. Just get your target and go!

Denis Jatsyshyn: During your numerous tours, you have been to Africa, Europe, Asia and Latin America. Is there any part of the world where you haven’t performed?

Francis Goya: I have never had a concert in Australia. I would like to go in sometime. I am not young anymore, but if the possibility arises, why not? there will be nice possibility, why not?

Denis Jatsyshyn: Where do you take your inspiration from?

Francis Goya: Sometimes when I am visiting different countries and I listen to folk songs and songs from the country I tell myself, ‘this song would be good on the guitar!’ Sometimes I make an album with songs I don’t compose, but most of the time I play my own songs. I find inspiration visiting many countries. Inspiration for compositions depends on the mood. During holidays I always have my guitar with me. She is my second wife – as my wife herself tells me. Sometimes I play and a song comes to me in such way that I don’t have any doubt it will be a hit. I just play away and the melodies come. At present, I am planning to make an album in Ukraine, using Ukrainian songs.

Denis Jatsyshyn: That is a beautiful thought. Which album is your favourite?

Francis Goya: It is difficult to say. I made albums of my own songs and albums from covers, and I also make albums for TV advertising. I like the albums with my own songs best. Each song has its own atmosphere.

Denis Jatsyshyn: You have recorded fifty albums, many of which have reached gold and platinum status. While you are composing a song or album, do you feel that this one will be successful, while that this one will touch the soul of the crowd?

Francis Goya: It depends not only on myself and the other musicians, but also on the media. I have compose many songs, but very often their release depends on the market. Today’s songs have to be sold on the Internet. The majority of companies are not interested in instrumental music now. You have come to them with something new. I wish I knew how to do it.

Denis Jatsyshyn: Your career must have involved lots of ups and downs. When were the most difficult periods?

Francis Goya: I had a challenging time in the early 1980s because I lost my producer and my manager. I did everything by myself and an artist cannot do that – no artist can sell himself. He needs someone to do it for him. An artist has to make the music. It is not so easy to organize tour and promote music. If you don’t have a good PR team, then your chances of success are very small even if you have a hit. That’s life.

Denis Jatsyshyn: What sort of music do you like to listen to?

Francis Goya: Many kinds of music. I like jazz, Latin, African romantic music and some eastern music. I listen almost everything.

Denis Jatsyshyn: Who are your favorite groups?

Denis Jatsyshyn: As well as your music, you are also the Founder and President of the Francis Goya Foundation. What is the aim of the foundation?

Francis Goya: The foundation was created for the poor kids on the streets. I have a musical school in Marrakesh. My foundation pays for the courses for these kids to study. We are currently focused on Morocco but I would like to expand the foundation worldwide. While in Ukraine I have spoken to groups working with displaced persons from east Ukraine. If I can, I hope to be able to help these people.

Denis Jatsyshyn: You are currently touring Ukraine. Is this your first time in Ukraine?

Francis Goya: No, this is my second tour. I came about 8 years ago. I was in Kyiv, Odesa, and Dnipropetrovsk. It was a great experience.

Denis Jatsyshyn: Your current tour includes concerts in Kharkiv, Dnipropetrovsk, Odesa, Lviv, and Kyiv. What are your expectations for the tour?

Francis Goya: Of course I will be very glad to see people attending the concerts. I want to touch the people with my music. It will not only be guitar this time – we will also have piano.