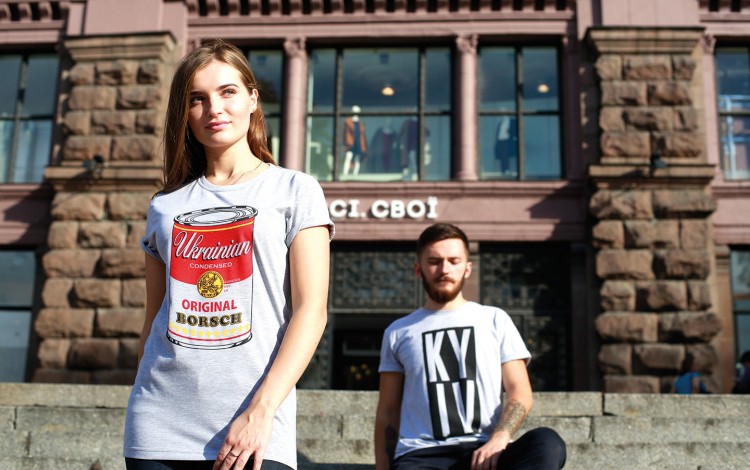 Kyiv in fashion: shop assistants strike a pose outside the popular "Vsi. Svoi" department store which sells exclusively "Made in Ukraine" designs in the heart of the Ukrainian capital

Kyiv has long struggled from image woes, but the city has now discovered a brand that appears to be eminently sellable. The ancient Ukrainian capital is currently busy reinventing itself as a hipster hub and positioning itself as the self-styled ‘New Berlin’. The buzz has even reached the hallowed halls of the Ukrainian Foreign Ministry, with Minister Klimkin himself claiming in August 2017 that the Ukrainian capital had usurped Berlin’s crown.

Nor is the Foreign Minister the only politician talking up Ukraine’s hipster credentials. Activist MP Sergiy Leshchenko’s take on this newly discovered swagger was the talk of September’s YES Conference in Kyiv. “We may be poor, but we are sexy in a very boring Europe,” said Leshchenko. His quote ended up receiving more coverage than the geopolitical pontification for which the conference is famous.

This shift in emphasis is perhaps understandable. After almost four high-intensity years of revolution and war, exhausted Ukrainians could be forgiven for preferring parties to politics. However, there is enough substance behind Kyiv’s recent rebranding to suggest the Ukrainian capital may be the real deal.

The hipster Kyiv vibe begins and ends with the city’s thriving bar and nightlife scene. Once a domain dominated by a classless collection of sex tourists, glamor girls and wannabe bandits, the Ukrainian capital’s diverse nocturnal options are now the subject of rave reviews from the kind of publications that pride themselves on being well ahead of the cool curve.

Inevitably, the seedier side of Kyiv’s clubbing scene is still alive and well, but it is no longer the only show in town. Going out options are now both varied and vibrant, while increased international interaction has put paid to the old trendsetter time lag that once left Kyiv venues feeling somewhat dated and parochial compared to their West European counterparts.

Daytime Kyiv also looks and feels increasingly like a hipster city. One of the boom industries in recent years has been the barbershop sector, with an explosion in bearded Kyivites providing a steady flow of customers to new salons springing up across town. Tattoo and piercing emporiums have followed a similar trajectory. Bicyclists are now an increasingly common sight, despite the almost complete lack of adequate cycling lanes.

Fashion is another local industry to receive a massive post-Maidan boost. Ukrainian fashion designers have leveraged the increased media spotlight since 2014 to become genuine global brands, with leading publications like Vogue regularly providing coverage of the formerly rustic and garish Ukrainian fashion scene. Nor is this merely an ethno-fad rooted in temporary enthusiasm for Ukraine’s love of folksy embroidery. Kyiv designers have scored big international hits thanks to innovative designs, with Ksenia Schnaider’s funky “Demi Denim” combo jeans hailed as one of the looks of the past year.

Meanwhile, closer to home, the patriotically and pragmatically driven “Made in Ukraine” craze has helped a whole new generation of Ukrainians break into the retail fashion market. Outlets like the downtown Kyiv department store, “Vsi. Svoi” (literally, “All. Ours.”), have found success by providing a platform for this emerging local talent. At street level, young Ukrainians are increasingly ditching the branded ostentation of the post-Soviet era in favor of more understated and original styles that draw their inspiration from contemporary London and New York rather than Moscow.

The post-Maidan explosion in street art has added to Kyiv's hipster ambience, with formerly dull Soviet architecture transformed into dozens of giant canvases featuring works by some of the most celebrated muralists in the world. Since 2014, the Ukrainian capital has become the standard-bearer of Eastern Europe’s street art scene, attracting considerable media coverage and leading to the launch of specialized mural tours of the city.

Even entire Kyiv districts are getting in on the hipster act. The riverside Podil region is now routinely touted as Kyiv’s Brooklyn. Once a somewhat shabby but elegant backwater of side streets and courtyards lying lazily alongside the gentle magnificence of the Dnipro River, today’s Podil is a hive of hipster activity replete with achingly modern IT offices and popup coffee bars.

Kyiv’s hipster reinvention has also helped the city sell itself as a filming location. A number of European pop stars have shot videos in the city over the past twelve months, while the recent launch of an Apple Watch advert filmed at Kyiv’s Central Railway Station generated considerable buzz. The Ukrainian capital still has a long way to go before it is able to attract big money Hollywood blockbusters like its Central European neighbors, but the city is already developing a reputation for stylish locations and highly skilled production crews.

Of course, not everyone is in step with the hipster vibe. For the millions of Kyivites struggling to get by on minimal salaries, talk of a “New Berlin” is borderline incomprehensible. Nevertheless, the mounting hipster hype surrounding Kyiv reflects a growing sense of creative energy and self-confidence evident throughout Ukrainian society as the country steps out of Russia’s shadow and lays claim to a place at the European table.

This rebranding process may strike cynics as somewhat superficial, especially in light of the ongoing military conflict and economic hardships in the country. Nevertheless, it could prove particularly useful in terms of Ukraine’s international image, helping to counter years of negative coverage and unwelcome associations. Ukraine was once synonymous with the worst excesses of the post-Soviet world. It now has the opportunity to rebrand itself as a fun and fashionable destination for people seeking the next big thing. This opportunity to challenge negative perceptions may well prove to be the most enduring legacy of the Kyiv’s hipster moment.

The city’s affordability and relative lack of international exposure will both come in handy as Kyiv seeks to capitalize on the attention generated by the whole “New Berlin” label. As a cheap and unknown destination, it has every chance of appealing to entirely new international audiences. However, fashion is notoriously fickle and the Ukrainian capital would be wise to seize the moment while it can. Today, Kyiv is Europe’s new hipster capital, but it is only a matter of time before the next up-and-coming city declares itself “The New Kyiv”.